I remember you best from '90s video games. 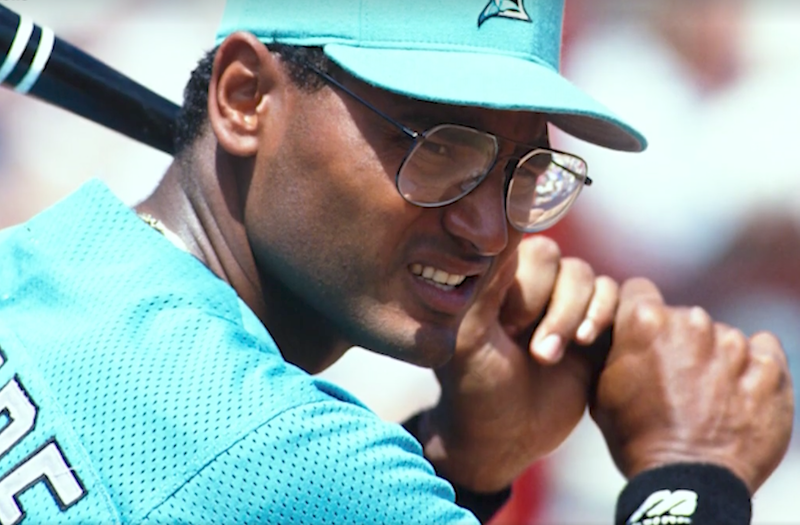 Ah, Orestes. Son of the murdered Agamemnon, whose untimely demise caused a plague of flies to descend upon the city of Argos. The big O avenges his daddy’s murder by slaying his treacherous mommy Clytemnestra, only to wind up hounded by the Furies and outside the laws of gods and men. He then proceeds to lift the plague of flies afflicting the Argives, and, at least in Jean-Paul Sartre’s imaginative retelling (The Flies), leaves his former subjects to create their lives in freedom. Existentialism for the win, if that’s what you choose to believe!

Ah, Orestes Destrade. Cuban refugee and prototypical Quad-A hitter who forged a solid career overseas in Nippon Professional Baseball. Possessor of a 1989 Topps card despite an unmemorable .149 batting average in 53 unmemorable plate appearances for the almost-there-but-not-quite-yet '88 Pirates. And finally, sorta-home run hero of the 1993 Marlins.

It’s in this last capacity that I’m most familiar with Destrade’s work, because I know EA’s first Super Nintendo baseball game, MLBPA Baseball, like the back of my hand. It was part of a holy trinity of baseball games that included RBI Baseball '94 and Tony La Russa Baseball 3. The latter two kept statistical records—TLRB 3 actually had an astonishingly detailed career mode, at least by the standards of the pre-Out of the Park Baseball era—but MLBPA Baseball, with its tomahawk chop theme song and nostalgia-inducing '93 rosters, received the bulk of my actual playing time. In part that’s because I liked the SNES controller so much, in part because RBI Baseball played and handled like a bus, and in part because TLRB 3 lagged and crashed on my vintage Compaq computer.

For reasons that are lost to history, the teams I used most were the '93 Tigers (Eric Davis!), '93 Phillies (Pete “Inky” Incaviglia!), '93 Cardinals (former Mets wunderkind Gregg Jefferies putting up prime-period Hal Chase numbers at first!), and the two expansion teams. The Rockies, although saddled with godawful pitchers like Armando Reynoso and David Nied, at least had a bunch of solid hitters at their disposal. The Marlins, on the other hand, had ageless knuckleballer Charlie Hough on the mound, plus Gary Sheffield after a lost season, Jeff Conine coming into his own, and perennial Donruss “Rated Rookies” Nigel Wilson and Darrell Whitmore riding the pine.

But we can’t forget the great Orestes Destrade, who possessed a mere “5” power rating in spite of his 20 round-trippers. Sheffield, who hit 10 home runs in 275 at-bats, warranted a “6,” and Conine, though he’d later become something of a power threat, received a “3” from the game designers.

It’s strange, really: Destrade, who lives on as a Rays broadcaster and possibly still wears those awful metal-rimmed 1990s glasses, doesn’t deserve a prominent place in my memory. Also Nigel Wilson and Darrell Whitmore: Donruss “rated rookies” who never rated much time in the major leagues. They aren’t remembered at all for their playing, although they played the game, but rather for being a part of my life. I stared at their likenesses on trading cards and utilized them as players in my video games. None of this means anything except for the simple fact that, as a way of explaining and justifying my existence from 1988 to 1998, it means everything.