It Was Supposed to Be a Good Time

It's been almost 25 years since the death of Steve Olin. 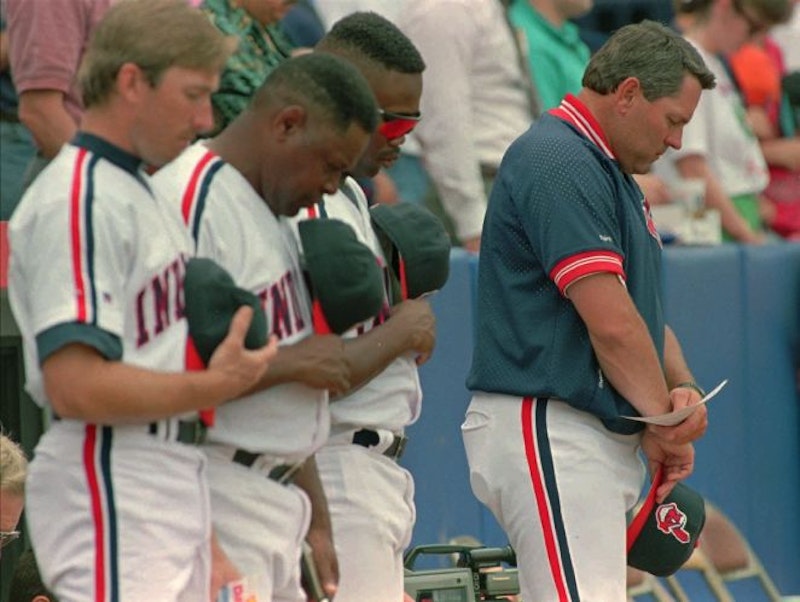 Relief pitcher Steve Olin, who died in 1993 with 48 saves and a 3.10 ERA, looms large over all of this. Olin, who met his demise in the same boat crash that also killed Tim Crews, was the up-and-comer who still had something to prove: 1992, his last year, was also his best year, his breakout year. He was a Nice Guy, a Good Kid, One of the Good Ones. If he lives, does eternal closer Jose “Joe Table” Mesa ever get a chance?

Crews, whose ‘89 Topps card has to be among the most iconic in the series—just this huge close-up of his big welcoming face and perfect moustache, framed by the Dodger blue that’s so synonymous with the era—was at the wheel and under the influence. Thus, in the eyes of the moralizing media, it was as if he didn’t die at all. No, the Sports Illustrated/Sporting News/ESPN coverage, which seemed to be 24/7 at a time when little was, focused on deceased Olin and the injured Ojeda: Bobby O, the Mets badboy, and the reluctant survivor.

It was supposed to be a good time. Crews, Olin, Ojeda, and Indians strength coach Fernando Montes had gathered at Crews’ lake house for some preseason bonding, which quite understandably entailed some preseason partying. With Montes remaining on shore, the three ballplayers took Crews’ 18-foot boat for a spin around Lake Nellie. During their second lap around the lake, the vehicle smashed into a neighbor’s unlit wooden pier, killing Olin instantly, inflicting severe brain trauma on Crews, and seriously injuring Ojeda, who attributed his survival to the fact that he was slouching in his seat.

Crews’ brother Jim Crews hated how his brother was portrayed as the villain, the enabler: “Just believing a rich ball player out there not paying attention to what he was doing was over the—drunk, just to use the word, which really infuriated me when I read it.” Ojeda, for his part, also didn’t blame Crews. “I know Crewser,” he told The New York Times. “I know he could have done brain surgery, if he was a brain surgeon. Certainly we’re not choir boys… everybody does things, then something bad happens, and we all look for reasons—why did that happen?”

During the curious interstitial period between the cocaine “epidemic” and the steroid “epidemic”—both in quotes because such made-up, benighted epochs matter only to the jock-sniffing Skip Baylesses and Jay Mariottis of the world—this was Big News. Death had claimed two youngish baseballers still in their near-primes for the first time in over a decade. Ojeda’s eventual comeback wasn’t really a comeback but was still covered like it; he pitched a couple of more innings for the Indians in '93, even fewer for the Yankees in '94, then retired and left the country for a while.

The 1993 season was one of the best in MLB history, and not just because parity (and the Phillies/Blue Jays) reigned: the game, it seemed, was perfectly balanced between pitchers and hitters for this one spectacular year. It was an ideal campaign to enshrine in EA Sports’ MLBPA Baseball, a game I never tired of playing and thus will never tire of referencing. But the Olin story, which was also the Crews story (yet never quite as much), followed Ojeda and the Indians throughout the year. It had to–Ojeda’s mound catharsis was “needed,” if only to complete the Big Freakin’ News Cycle—but it obscured the fact that the Indians were themselves about to become the Next Big Freakin’ Thing. The pieces were there: Paul Sorrento, Kenny Lofton, Carlos Baerga, Joey Belle, Sandy Alomar, Manny Ramirez, Candy Maldonado, Reggie Jefferson. Well, maybe not those last two, but the others, yes, you betcha. Yet, '93 for them wasn’t about the still-missing pieces—slick-fielding Omar Vizquel would come over from Seattle next year, in a trade for Felix Fermin—as it was about the forever-gone pieces.

1993 was also when I started noticing death, like really noticing it. Both of my grandfathers would pass away a year later. Celebrities I recognized and appreciated were starting to drop like flies: Bill Bixby, Vincent Price, Audrey Hepburn, André the Giant (we hardly knew ye). But Olin and Crews went before their time! They had so much left! There but for the grace of God go I!

Now 34, I’m older than both of these men were when they died. They had 27 major league wins and 63 major league saves between them. What do I have, pray tell? My health, and maybe that’s everything. As G.K. Chesterton put it in his gnomic little essay about Sir Walter Scott: “The center of every man’s existence is a dream. Death, disease, insanity, are merely material accidents, like a toothache or a twisted ankle. That these brutal forces always besiege and often capture the citadel does not prove that they are the citadel.”