Baseball offseason obviously not going well for this reporter. 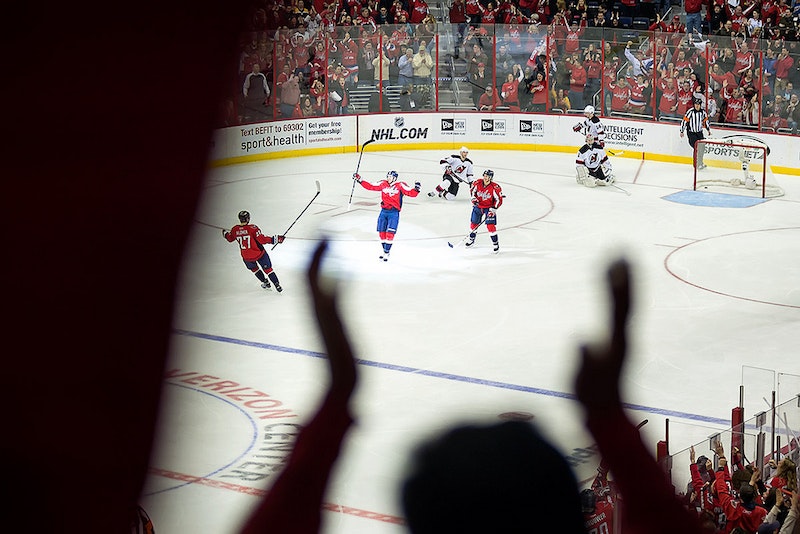 So, you are glued to your two open NHL.com browsers following West Coast games on “gamecenter” play by play with your pathetic Draft Kings selections open in another browser window. This is what sports has done to you. It gets dark at 4:20 p.m. and you’re glued to your HP Pavilion wide screen PC with a 24-ounce can of Coors on a Keens Chophouse coaster to the right of the keyboard. The only missing elements here: you’re not in your mom’s basement and you have a peg on the wall holding 20 years-worth of laminated press passes and sportswriter credentials that mock you with every cobweb they acquire.

You get a cheap thrill when some nameless winger whom you added to your squad fires a shot on goal in Denver and three minutes later it appears on Draft Kings as a little light-up “SOG” icon next to your player’s name and you go from 140th place in the contest to 122nd, with only the top 100 getting paid. Your account is $18 strong, so you need this possible $10 win. Bad. This is what sports has done to you.

There’s nothing else on, no local hockey or basketball of any kind. You feel like the athletics version of Hubert Selby, with an unexplained obsessive attraction to CNN journalist Christiane Amanpour and her University of Rhode Island party school legacy. If URI was playing tonight you would watch on ESPN3 but they’re not. So, you gaze at her on channel 13 interviewing Guardian reporter/authors and former CIA spooks. But a hockey assist by a Dallas Star distracts you. Dang it!

Draft Kings is open on your PC because it was the day of the World Cup draw for next summer’s tournament in Russia, a day you wrote about in this space four years ago, along with several articles about watching U.S. soccer qualifiers in remote and odd locations. It’s all a nightmare now, repeated in your sleep like the girl from The Ring with her hair over her face, only this time it is Alexi Lalas in a soiled robe and Taylor Twellman doing a ghastly narration. Lalas has climbed out of a well in Hackensack, NJ, and your ex-girlfriend from Hoboken who was with you in Paris for the 1998 World Cup failure is singing Billy Joel karaoke inside a packed Hoboken bar and you wander outside and wade into the Hudson River with your pockets weighted with stones.

It’s the only answer, because this is what sports has done to you. The Hudson is too shallow to drown your sorrows, and Russia and the FBI dominate the news. The President, the former owner of the failed United States Football League New Jersey Generals, says the current FBI wouldn’t qualify for any law-enforcement World Cups of its own. And he ought to know. His wife is from somewhere over there.

But wait, a Limey says, noises off. Your wife is from London so you can legally root for England next summer despite all of your work promoting U.S. Soccer throughout hipster journalism circles. That Hoboken girl sells real estate in Connecticut now, married to an ESPN writer toiling in Bristol among many a firing axe hovering overhead. God bless them. My wife’s family does not follow the game, save for one brother-in-law Chelsea fan who somehow keeps you sane half the time but he is more into county cricket, it turns out. This is what sports has done to him.

Baseball betrays in this offseason with a free agent market molasses that thinks Wellington Castillo to the White Sox is worthy of any notice outside the mimeographed congregational bulletin for Pentecostal Uprise Station #2 on Emerson Place and Myrtle Avenue in Brooklyn, NY. Outside that very church storefront is the stenciled Bible verse: “No weapon formed against me shall prosper” which is Isaiah 54:17 and is so true when it comes to U.S. Soccer. As I write this, Sunil Gulati, the president of the U.S. Soccer Federation, announced he won’t run for reelection while our national team sits in limbo. Various sandbaggers have applied to replace him, including Major League Soccer wonks, the same people responsible for dragging our talent out of superior European leagues and into the relegation-free, non-competitive retirement shuffleboard circuit that is the current overly-expanded MLS.

No, baseball is no help at this point. Yes, it’s kind of cool that Bucco centerfielder Andrew McCutchen and his wife named their newborn son Steel last week. Other than that, the offseason annoyance has been all about this Japanese pitcher/slugger who apparently comes with his own art director and a Family Feud-style quiz that interested MLB teams must fill out. Derek Jeter, meanwhile, has turned into Mr. Potter from It’s a Wonderful Life, and Giancarlo Stanton is the savings and loan every team wants to save. Let’s hope the former Michael Stanton does not end up in St. Louis and pull a reverse Albert Pujols and truly make this Pirates fans’ life even more miserable.

I shouldn’t complain, however. Soccer has been very, very good to me. My daughter played her first scholastic season this past fall, a seventh grader toiling amongst eighth graders. She scored 17 goals with six assists in eight games. Team finished 7-1 with the same personnel that three years ago went 0-12 in a travel league. I was an assistant coach then and saw it all and was yellow carded on the sidelines in Red Hook. I told them if they stuck together, one day they would laugh at the 0-12 campaign. They did. What I liked is how Roxanne quietly went about her business, with little fanfare, kind of in a midwestern Lutheran mode but without the corn. Like watching the Germans dismantle Brazil, but on a local farm-to-table scale.

That same daughter came back from a thrift store the other day and handed me a copy of Look magazine from Nov. 22, 1938. She had heard me ranting about how the college football playoffs this season is once again dominated by hillbilly Southern schools. With Ohio State being snubbed, it’s all Bubba again this year and who above the Mason Dixon lines gives two shits whether Clemson or Alabama advance? One of the main Look magazine features is teased on the cover (featuring Claudette Colbert doing the CanCan) with the headline “EXPOSED: College Football is a Racket.” The un-bylined coverage is parroted present day by many a columnist, with a few back in the 1930s warning the game would soon be ruined by big money and college recruiting. There’s a crude map of the U.S. explaining what style of football players come from various regions. The northeastern states are highlighted with this caption: “This blue blood region is not a big producer, but when a star from here is good, he’s very, very good.” A photo above shows a University of Alabama player in a wifebeater pushing a Mike Dukakis-style lawnmower. The caption reads: “At Alabama, a good player can ‘earn’ about $300 a year cutting stadium grass.” Take that, Nick Saban! The media has been onto you since the late 1930s!

Your Draft Kings hockey is finished and you are a “winner” amongst fellow team names such as “TestosterTown” and “HookABrotherUp” and “Chinslaps” and “TonyMontana252.” The creepy demographic of these team names does little to discourage you from coming back for more. This is, once again I’m afraid, what sports has done to you.

But the next day on the car radio Nina Totenberg of NPR is talking to New Jersey governor Chris Christie about a possible Supreme Court approval of state-by-state sports betting. Sheesh, over here! I can’t even enjoy my meager Draft Kings winning without that being ruined as well? Where is former Knick Bill Bradley when I need him?

These are among my many questions as Pearl Harbor Day arrives.