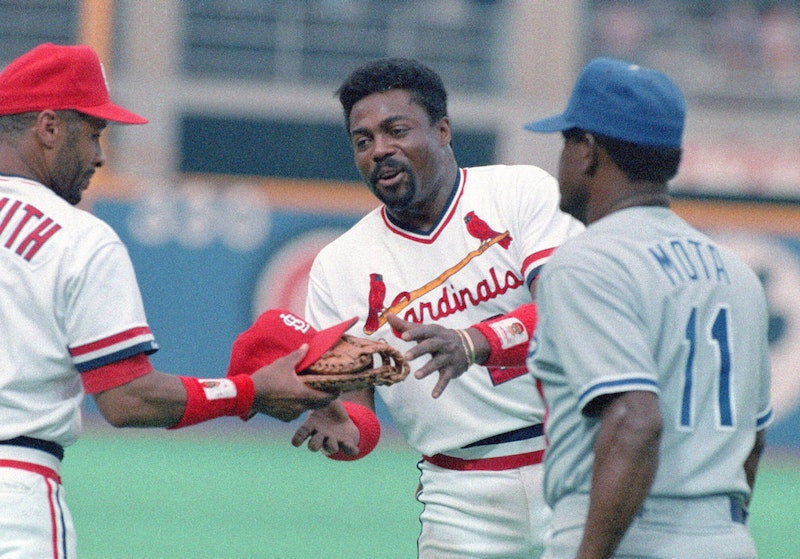 It was something of a shock that night when Pedro [Guerrero], naked as always, slathered his member across the banquet of post-game cold-cuts. It must have finally occurred to him that he simply could. I want to say he did it with relish, but that goes without saying. In any case, the clubhouse was seized with a kind of trauma, the players’ eyes wide, their mouths agape at the singular destruction of dinner. We’d all seen Pedro wield his instrument in any variety of ways but never in the vandalism of free food. —Richard Hoffer

Pedro “Pete” Guerrero, one of dozens of major league players to emerge from San Pedro de Macorís, was for a couple of years every bit as good as Vladimir Guerrero, who was unrelated to him and from a different part of the Dominican Republic. Bill James wrote that Pedro was “the best hitter God had made in a long time,” and from 1982 to 1985 he wasn’t wrong.

I don’t remember that amazing Pedro Guerrero though. I remember the one who appears on a baseball card, a thick-bodied forever-St. Louis Cardinal acquired for the vestiges of pitcher John Tudor during the Dodgers’ 1988 pennant push. Guerrero, it seems, had run afoul of Don Frye/Dan Severn-looking ex-football hardman Kirk Gibson, with whose precious eye black Guerrero had tinkered during spring training. Guerrero’s happy-go-lucky demeanor didn’t fit neatly with Gibson’s “If you’re not first, you’re last” weltanschauung, so off he went.

Baseball card companies continued to tout what remained of Guerrero’s once-nonpareil skills, which wasn’t much given that he didn’t care nearly as much about training as he did about cocaine. He had one last good season in 1989, was featured on more Donruss “MVP” cards than there are grains of sand in the Mojave Desert, and then declined in skill level from “Hall of Fame lock” to “Josh Hamilton-style woulda, coulda, shoulda,” except he was superior to Hamilton in every conceivable respect.

In one of his final highlights, Guerrero traded blows with bulldog Cardinals closer Todd Worrell after Guerrero had invited fellow Dominican Sammy Sosa, who wasn’t the steroid-engorged superman he’d later become, to tour the Cardinals locker room. By all accounts, Worrell, who was well on his way to being washed-up, got the best of the aging, run-down Guerrero.

Guerrero would later wind up as the beneficiary of a “low-IQ” defense after getting caught in a DEA bust when a $200,000 cocaine deal went south. Guerrero’s lawyer, Milton Hirsch, argued that he was simply too mentally deficient to understand the consequences of his actions, the jury bought it, and the ex-Dodgers slugger eluded justice in much the same way he used to elude batting practice and calisthenics drills. In 2015, after apparently pulling his life back together the way everybody does once the race has been run, Guerrero began suffering from cranial bleeding and wound up back in the hospital. His condition has been stabilized, leaving him hopeful that he’ll be able to return to his second career as a manager in the low minor leagues.

The conclusion of Pedro Guerrero’s story, like the conclusion of anybody’s story, isn’t sad or tragic. For a couple of years, he was the best player of his generation, and then retrospectively we got together and decided he wasn’t. His .300/.370/.480 line is ridiculously good by the standards of 1980s hitters, but it wasn’t backed by enough counting stats (1,618 hits, 215 home runs) for the “small hall” Jay Mariottis of the world, who would prefer a blank ballot to anything else, and so off our hero went into the dustbin of history. Guerrero didn’t care that much about baseball, at least not as much as “gamers” like Gibson and Will “The Thrill” Clark and Pete “Charlie Hustle” Rose, yet he was probably better than all of them for a little while. That won’t put food on your plate the way a $200,000 cocaine deal might, but it wasn’t nothing.