The Biggest Baseball Player Who Never Was

First baseman Walter Young tipped the scales at 315 pounds, but never got a fair crack at the big time. 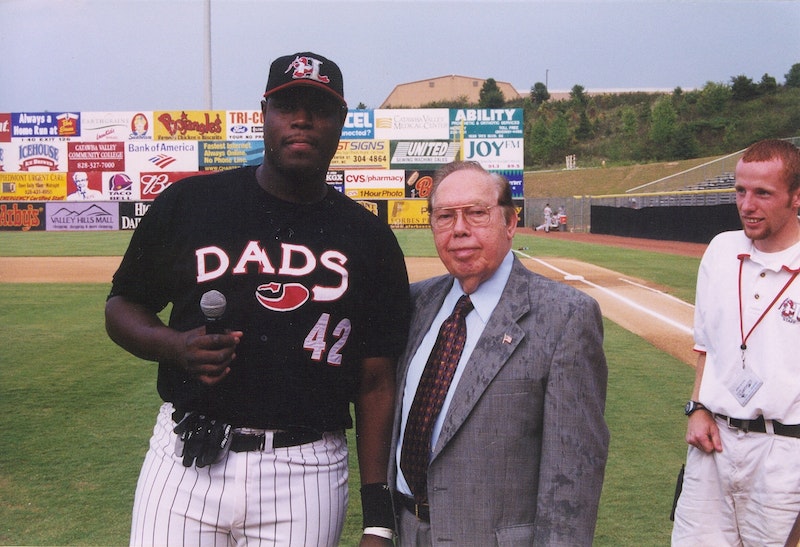 Ah, Walter Young. The man with the highest Body Mass Index of any player in the history of Major League Baseball. He spent exactly one month in “The Show” with the woebegone, Lee Mazzilli-managed 2005 Orioles, during which time he batted .303 and slugged .424 across 37 plate appearances.

Not terrible numbers, all things considered equally. Young wasn’t much of a first baseman—how much of a first baseman could any 320-pound man be?—but he was one heck of a BP hitter. Swinging a bat heavy with expectation, he’d belt moon shots deep into the upper deck. Yet he, like the behemoth Calvin Pickering before him and the gigantic Kyle Blanks afterwards, never got a fighting chance to stick in the bigs.

Young was one of those bizarre figures who, mythological proportions be damned, found himself swept into the dustbin of history for no apparent reason save bad luck. He had neither a spectacular rise nor a correspondingly great fall; he made no terrible decisions; he did not suffer from an excess of pride or self-confidence. But now he’s gone from our lives.

But let’s re-imagine and enlarge Young’s life, large though it was. In another world, even one every bit as imperfect as ours, Young gets called up to the Pittsburgh Pirates—the organization that drafted him in the 31st round of the 1999 amateur draft—in 2003 after posting a .333/.390/.563 line for the low-A Hickory Crawdads. Those hypothetical ’03 Pirates, like the ones we knew and loved, are a terrible outfit, but they’ve got a surprising amount of pop: Brian Giles, Reggie Sanders, Aramis Ramirez, Matt Stairs, Craig Wilson, and whatever is left of prime-period Kenny Lofton are on the roster. There’s no reason for Young to be brought up so early, but manager Lloyd McClendon is staring down his third straight losing season with the prospect of punchless Randall Simon and a declining Kevin Young splitting time at first base.

Young the younger and heavier beats out Simon for the right to man the left-handed side of a platoon with Young the elder and slimmer, then proceeds to hit a borderline-acceptable .220/.290/.400 over the course of 265 at-bats as the Pirates enjoy their 11th consecutive losing season. His 19 home runs place him third on the team behind Sanders (35) and Stairs (27), and are sufficient to justify the Dodgers’ decision to acquire him in the offseason for a pair of middle relievers. Wunderkind Dodgers general manager Paul DePodesta, schooled in Billy Beane’s Moneyball methodology, either deliberately overlooks or fails to notice Young’s astonishing 82 strikeouts and atrocious defense at the game’s easiest position.

Teamed with fellow baseball misfits Milton Bradley and Jose Hernandez, Young turns in what would prove to be the best performance of his career, helping the Dodgers to a 92-70 finish and first place in the NL West. While sharing first base duties with an aging Robin Ventura and a declining Shawn Green, the 24-year-old Young mashes at a .265/.350/.600 rate, blasting 29 home runs over the course of 340 at-bats. He also strikes out 97 times, commits several crucial errors during a hard-fought NLDS series against the St. Louis Cardinals, and is caught stealing during his only attempt of the season. DePodesta trades him to the Seattle Mariners in the offseason for  veteran catcher Dan Wilson and some organizational depth. Young is now on the downslope, although it’s unlikely that he realizes this.

Playing mostly designated hitter for the Mariners, Young slugs a semi-robust .240/.300/.480 for the league’s worst team. His 22 home runs place second on the team to equally Brobdingnagian (albeit far svelter) first baseman Richie Sexson‘s 46, but fans and management aren’t impressed. Having showed up for camp weighing 340 pounds, he spends the year waddling, walrus-like, around the bases. In late November, he sets a dubious record by eating a 36-egg omelet at Beth’s Cafe, a local watering hole famous for its ginormous breakfast plates.

Lured by a three-year guaranteed contract, Young jumps to the Orix Buffaloes of the Nippon Professional League in 2005. His immense size and penchant for the tape-measure home run make him an immediate fan favorite, but his desultory efforts in the field and on the bases hurt Orix every bit as much as his offensive achievements help. After 90 games, he’s leading the NPL with 25 home runs… and then abruptly quits the team and walks out on his million-dollar deal, citing homesickness, ill health, and depression.

Between 2006 and 2009, Young plays in Mexico and for various American Association squads. He still hits home runs, but that’s the extent of his skill set. He spends 2008 in training camp with the Washington Nationals, enjoying a monster spring, yet doesn’t make the team. Sources place his weight at over 400 pounds. Watching him try to cover first is comical. The minor league teams that employ him treat his antics in the field as a sort of Harlem Globetrotter routine, with the joke, as always, on the massive Young.
•••
In 2010, recognizing that his heart is no longer in the game, Walter Young calls it a career. He returns to his hometown of Hattiesburg, MS, and lands a job as a postal worker. He attempts various diets, to little avail. He meets a woman, falls in love, falls out of love, meets another woman, falls in love again. He occasionally plays softball with his cronies from high school. In other words, Young experiences the usual slow grind of middle aging into death, made slower and more unusual by his sheer visual novelty.

This was the world, imperfect though it too might have been, in which Walter Young belonged. Not here in ours, lost among the forgetful, the answer to a trivia question no one is asking.