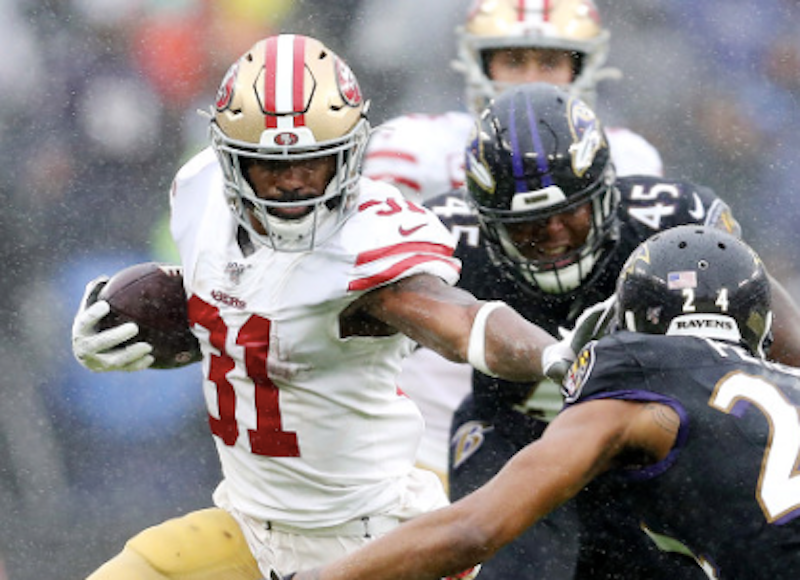 All NFL teams have practice squads made up of nameless players whose job is to challenge the starting players on the field during the week, and then step back into obscurity when game time comes around on Sunday. Perhaps when you hear about these players (and you rarely hear their actual names), you assume that's where they'll stay until they get a regular job. That happens, but at a league minimum salary of $8000 per week, practice squad's not a job to give up casually.

The practice squad is not a well-worn route to a team's regular roster like the college draft, but consider the NFL career of a previously little-known running back out of Purdue in 2015 who the Philadelphia Eagles picked up as an undrafted free agent and then cut in September, just before the season began. This player then joined the Eagles practice team, where he remained for a couple of weeks until the Miami Dolphins signed him. When Miami put him on waivers in October, the Baltimore Ravens claimed him, but then placed him back on waivers in December, when the Cleveland Browns claimed him for the rest of his rookie season. When the Browns waived the running back just before the beginning of the 2016-2017 season, the New York Jets picked him up for their practice squad, but six days later the Jets cut him and he joined the Chicago Bears practice team. The Bears then signed him to their active roster, but waived him in October, and he returned to their practice squad until getting cut in November.

Four days later, the San Francisco 49ers, his seventh team in less than two years, signed this player for their practice squad, and by the end of the year he was on the team's regular roster. On January 19, 2020, this running back, whose name is Raheem Mostert, gained 220 yards and scored four touchdowns—a feat never before accomplished in an NFL playoff game—against the Green Bay Packers in the NFC title game to almost single-handedly carry the 49ers into Super Bowl 54 in Miami, where he'll follow his regular pre-game motivational routine of looking at the list of all the teams that have cut him.

This player who could at one time barely make an NFL practice squad, and who's been coming off the bench all season to relieve starting running back Devin Coleman, has suddenly become the key to San Francisco picking up its sixth Lombardi Trophy. Mostert, if nothing else, has perseverance, not to mention blazing speed—he clocked a 10.15 (Usain Bolt holds the world record at 9.58 seconds) in the 100-meter dash as a track star at Purdue, where he was listed as a wide receiver for his first two years on the football team. The Florida native’s got vision too, which allows him to identify a hole and explode into it. He's also got balance, probably a carryover from all the time he spent surfing in his youth, when he was a pro surfing prospect. And now—finally—Mostert's got a "name." The Kansas City Chiefs know that if he slices them up like he did to the Packers, their first visit to a Super Bowl in 50 years will get them the consolation prize.

Many casual NFL fans had never heard of Raheem Mostert until the game against the Packers, but insiders and Niners fans knew about his talents. For the regular season, Mostert averaged an NFL best for running backs of 5.6 yards per carry in picking up 772 yards, the team's best yards-per-attempt average for running backs with at least 100 attempts since 1958. His rushing effectiveness has left many 49ers fans wondering why head coach Kyle Shanahan stuck with starting Devin Coleman at running back for the whole season, but in Shanahan's plug-and-play system, the starter's not necessarily the closer. With Coleman out against the Packers for the entire game with a shoulder injury, Mostert finally got a chance to blossom, which amounted to a spirit-crushing 7.6 yards per carry. No team can win in the NFL giving that much away with every handoff.

While the 49ers started off this season as a running team, some key injuries eventually made them more reliant on quarterback Jimmy Garoppolo and the passing game. But Garoppolo attempted only 19 passes in his team's first playoff game this season, against Minnesota, and only eight against the Packers. In those two games, the quarterback's only thrown to George Kittle—the holder of the NFL record for most receiving yards by a tight end who's been considered all season long to be the team's best player—a total of six times. When the other team can't stop your rushing attack, there's no reason to pass the ball.

Mostert, through his performance, is now demanding the ball in the first quarter of the Super Bowl. If the 49ers stick with him through the fourth quarter and he gets another 29 carries like he did in the previous game, it means they’ll have established physical dominance over their opponent, which inevitably leads to victory. No amount of heroics by Chief's wunderkind QB, Patrick Mahomes, will likely be sufficient for his slightly favored team, because he won't be able to get his hands on the ball enough. If the Chief's defense, ranked number 25 in the NFL against the run this season, can find a way to stop Mostert, Shanahan will turn to Garoppolo, Kittle, and the rest of the strong receiving corps.

That's when it could get interesting. Garoppollo's 23-5 as an NFL starting quarterback and Mahomes is 27-8. The 49ers running game, however, has an extra edge. The Chiefs don't just have stop Mostert; they have to counter Shanahan's innovative running plays and deal with the fact that even their opponent's wide receivers are skilled, eager run blockers. They're up against a cohesive unit made up of unselfish players. As for NFL superstar George Kittle, he'll block all game long, and he doesn't care if he gets even one pass thrown his way as long as his team wins.