Feigning Excitement for the 2020 Super Bowl

This year is going to be particularly bad for commercials because of presidential campaigns. 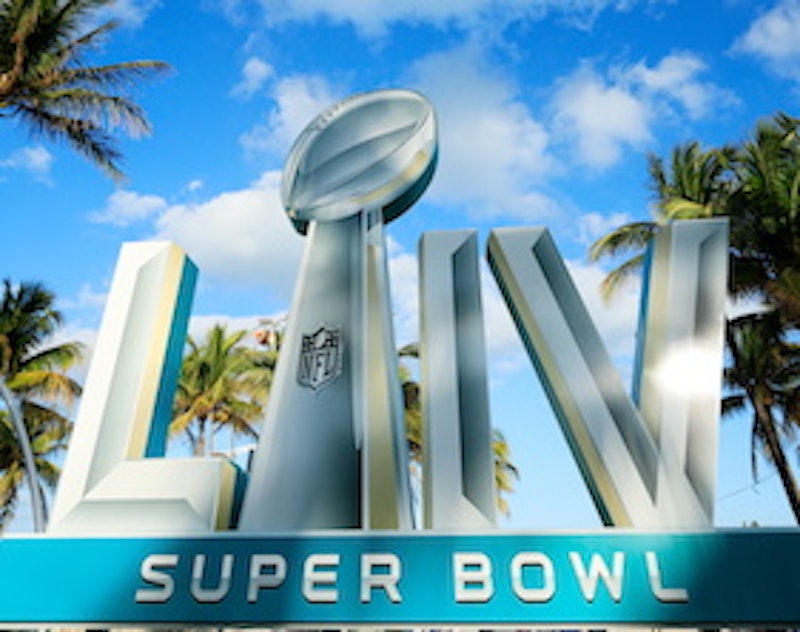 As a New England Patriots fan, the Super Bowl this Sunday doesn’t mean much to me.

The Patriots aren't in it this year, a rare occurrence since they've played nine times in the 21st century. Before this year, they had played in three straight Super Bowls and four of the last five. San Francisco 49ers quarterback Jimmy Garoppolo started two games for the Patriots in 2016 when Tom Brady served his four-game suspension for Deflategate. It would be nice to see him beat the Kansas City Chiefs. But it’s tough to feign excitement for Sunday’s game.

There's nothing particularly grand or historic about this Super Bowl. If the 49ers win, they'll be in a three-way tie for the most Super Bowl titles for one franchise (six) along with the Patriots and Pittsburgh Steelers. But while the Patriots have six rings under one head coach/quarterback combo, the 49ers winning six since 1981 isn't quite as impressive.

Even the last time the Patriots weren't in the Super Bowl, it was interesting because it was the last game of Peyton Manning's career. And at that point, Manning, the five-time MVP who once threw 49 touchdowns in one season, was arguably the worst starting quarterback in the NFL (17 interceptions in 10 regular season games). It's fair to say he was the worst quarterback to ever win a Super Bowl despite being one of the best of all-time.

Additionally, from my biased perspective, the Super Bowl wasn’t bad in 2006 or 2009 when Sean Morey played for the Pittsburgh Steelers and Arizona Cardinals respectively. However, that's because he—like me—is from Marshfield, Massachusetts. His teams never won a state championship, but seeing a local player in a big game did drum up some excitement in the town. I'm sure Milton, Massachusetts felt the same way when watching Rich Hill pitch for the Los Angeles Dodgers against the Boston Red Sox in the 2018 World Series.

For some people, the two teams playing in the game don't matter all that much because they just like watching football. For others, it doesn't matter because to them it's either a social outing or they watch for the commercials. I've never been able to figure out the latter group. Normally, people fast-forward through commercials if they're watching something pre-taped. And if not, they’ll often leave the room for a minute to do something else.

One has to expect the woke brands like Nike, Gillette, and Coca-Cola will pander to woke football fans (do the woke even watch football?), but this year is going to be particularly bad for commercials because of presidential campaigns. Already, Mike Bloomberg and Donald Trump have confirmed they bought Super Bowl ads. Surprisingly, Tom Steyer isn't doing the same since he and Bloomberg love popping up on TVs and in the unskippable ads before YouTube videos. We all already know how much attention those ads are going to get with over 100 million Americans expected to watch the game. Many considered the 2010 commercial Super Bowl commercial about Tim Tebow's mom not aborting him controversial, so one can only imagine how this will go over.

Some people like gambling on sports, so it doesn't matter who is playing in the big game as long as they have money on it. But then again, there are people like myself who don't bet because it's a risk. Betting in that regard is still a lot better than the regressive tax we call playing the lottery because applied knowledge helps.

And for those watching the game with a group of people, it's hard to fully enjoy and appreciate the game when you're not able to pause, rewind and go frame-by-frame to see each guy and how each play unfolds. And the camera angles watching football on TV aren't great. Viewers would probably love to see all of the wide receivers’ routes and who the QB can throw to on deep balls. On field goal kicks, it would help to give people a closer view of the kicker and the football so they can see why some kicks go through and other kicks don't.