Stanislaus Zbyszko Did It All

At 5’7” and 250 pounds, the Central European wrestler loomed large on the world stage. 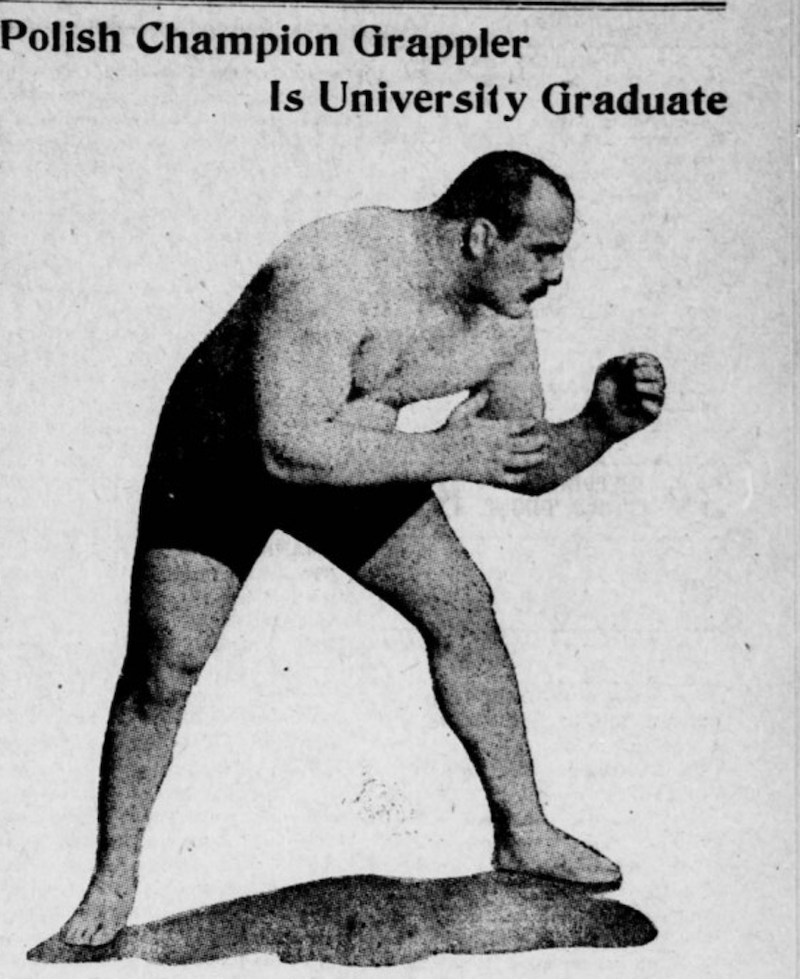 The origins of wrestling are murky and a little bit seedy. How did pro wrestling transform from a legitimate athletic contest into a carefully orchestrated spectacle undertaken by performers who moonlight as television, movie, and social media stars? It's hard to capture this transformation in a single story, much less a single life, yet early 20th-century wrestling champion Stanislaus Zbyszko worked and lived long enough to bridge that gap between then and now, almost single-handedly.

Zbyszko, born Jan Stanisław Cyganiewicz and educated as a lawyer during the waning days of the Austro-Hungarian Empire, immigrated to the United States at 30 in the early-1900s to compete against the greatest wrestlers in the world, men such as Iowa-born grappler Frank Gotch and Estonian superman George Hackenschmidt. In those days, even though the wrestlers themselves were stocky powerhouses, the matches were deadly dull affairs: hours-long defensive struggles, with one competitor mounting the other, usually immobile or nearly so, until their foe made a mistake and gave them an opportunity to slam their shoulders to the mat for the decisive pinfall.

Zbyszko excelled at this form of competition, demonstrating proficiency in the styles that later became standardized in the Olympics as "freestyle" and "Greco-Roman," but which were contested professionally, like boxing matches, around the turn of the century. He solidified his claim to worldwide fame by battling Gotch in 1909 and then, a year later, challenging the era's widely acknowledged international champion, Indian star Ghulam Mohammad Baksh Butt, the "Great Gama"—in both cases, Zbyszko utilized superior defense to force time-limit draws after hours of strategic inactivity.

But Zbyszko, a cerebral man who understood the value of showmanship, knew that legitimate-yet-dull bouts like these were costing the business lots of box-office money. Accordingly, by the early-1920s, he and his brother Władysław, who wrestled as "Wladek," had begun cooperating with athletic promoters who sought to script exciting outcomes to wrestling matches. Both served as world champions in this changing landscape, in which popular but unskilled celebrities and athletes from other sports could win world championships and attract crowds despite limited skills. Much as Zbyszko once carried Frank Gotch and the Great Gama on his back in legitimate contests, he now carried washed-up football stars like 6'9" Wayne "Big" Munn through eye-catching albeit short matches in which he put them over as world-beating wrestlers—by letting them win.

Yet Zbyszko never stopped doing business for himself. Booked to face then-world champion Munn in a 1925 match promoted by "Toots" Mondt, later the co-founder of what would become today's WWE, Zbyszko decided to change the outcome: he pinned Munn in seconds and then sold the belt to rival promoter Tony Stecher, agreeing to lose it to Tony’s brother Joe. This double-cross delayed pro wrestling's evolution toward showcasing pure entertainers who lacked real wrestling credentials by many decades. Because pro wrestling’s increasing reliance on predetermined outcomes remained trade secret, and despite periodic print exposes like Marcus Griffin's The Fall Guys that began to be published in the 1930s, promoters were forced to keep world titles in the hands of unglamorous grapplers such as Lou Thesz and Dick Hutton, who could defend them in real fights. Entertainment-first champions who served as mere “spectacles” drawing fans to the show had seemed like the future of the business in the 1920s until Zbyszko decided he wouldn't follow the script against Munn, and wouldn't really appear again in earnest until the early-1980s, when current WWE owner Vince McMahon awarded his company's title to Hulk Hogan, a massive and charismatic man but hardly a skilled amateur wrestler like Zbyszko or Thesz, before admitting later in the decade that the sport was entirely "worked," or pre-determined, in order to evade state athletic commission regulation.

Even as he stalled the sport's evolution in this respect, in another sense, Zbyszko paved the way for performers who came after him. Arguably the first great cinematic performance by a wrestler—certainly the only one to be included in the ranks of the "Criterion Collection," an art-house film series and streaming service—consisted of Zbyszko playing an articulate, proud, and thoroughly washed-up old grappler in noir director Jules Dassin's 1950 masterpiece Night and the City. As former star "Gregorious," Zbyszko is reluctant to let his promoter son "Kristo" (Herbert Lom) stage exhibition matches using the much-flashier "Strangler" (another long-time pro wrestler, Mike Mazurki). Owing to the machinations of grifter Henry Fabian (Richard Widmark), Zbyszko finds himself defending Greco-Roman traditions in a climactic in-ring conflict with the Stranger, a struggle that leaves him victorious but also costs him his life. Here, art would imitate reality: Zbyszko's character refused to follow the script, much as he’d refused to follow it against Munn in 1925, and showed what a real wrestler can accomplish when faced with a promoter attempting to brush him aside in favor of a more colorful but less skilled star.

Zbyszko's own end, at the age of 88, was far less violent. Following their retirement, he and his brother Wladek had relocated to a large farm in St. Joseph, Missouri, where they trained a number of the men—most notably long-time NWA world champion and infamous tough guy Harley Race—who in turn trained the likes of Hulk Hogan, Ric Flair, and the Rock. Zbyszko's own surname was adopted by long-time wrestler and commentator Larry Zbyszko (born Larry Whistler), a Pittsburgh native whose own performing career stretched from the 1970s to the early-2000s.

As American icons go, Zbyszko, at 5'7" and 250 pounds, hardly stood tall amidst giants, but he more than held his own on the world stage: he used his prodigious mat skills to protect his professional dignity even as wrestling transitioned from sporting contest to performative spectacle, while blazing a trail for his successors’ successes in the ring and beyond.

—For more on Night and the City, listen to Oliver’s discussion of the film on the Ellroy Boys podcast.