The Intensity of the Martial Arts 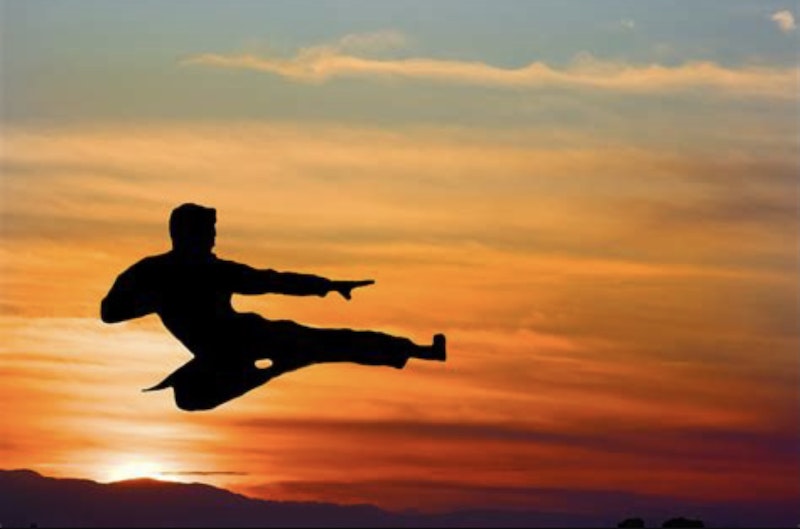 A bad day can become a good one when you enter the dojo. Ideally, you put aside whatever else is going on. You take off your shoes and bow before you step onto the mat. Soon, you’ll be exerting yourself in exercises and drills; perhaps practicing forms, choreographed sequences of techniques; perhaps sparring with your fellow students. You’ll need to be focused, so as to perform properly and minimize any risks of yourself or anyone else getting hurt. Whatever your abilities, you should be intent on improving them, as there’s no limit to what you can learn.

I’m a student at Mayer’s Karate & Fitness, North Haledon, New Jersey, where I’ve trained for about five years. I currently hold a brown belt and intend to become a black belt, which optimistically could be as soon as next year. The school’s four-hour black belt test is a formidable challenge, one generally undertaken by people considerably younger than me (56); often about four decades younger.

Our lead instructor, Dan Scielzo likes to tell new black belts that their martial arts career now begins; that their years as lower belts were preparation. One can continue into higher degrees of black belt; Mr. Scielzo’s black belt is six-degree, and Mr. Mayer, the school’s founder, holds a seven-degree belt. (An honorific such as “Mr.” is commonly given in the martial arts upon attaining a black belt or similar expert status.) Tang soo do, a Korean style that’s the mainstay of we learn at Mayer’s, is taught at some schools with a midnight-blue belt in place of a black belt, to underscore ongoing improvement rather than finality.

Moreover, as there are many styles of martial arts, becoming an expert in one style can be a prelude to learning other styles. Bruce Lee was adept in moving across such boundaries; and partly inspired by him, the sport of mixed martial arts draws upon combinations of diverse techniques, befitting its name. Constructing a taxonomy of martial arts is a complex task, as one might categorize them in various ways: for example, whether focused on striking (like karate or tae kwon do) or grappling (like judo or jiu-jitsu); unarmed versus armed styles; or differing degrees of orientation towards self-defense, sports or spirituality.

The term “karate” refers to particular styles traditional to Okinawa and Japan, but is also used to encompass striking-oriented martial arts more broadly. Tae kwon do, sometimes called “Korean karate,” arose from a push backed by the South Korean government in the 1970s to unify multiple styles under one national umbrella. Whereas tae kwon do means “the way of foot and fist,” tang soo do is “the way of the empty hand” and originally was “the way of the Tang [Dynasty] hand,” reflecting early Chinese influence.

While some tang soo do practitioners refused to enter the tae kwon do movement, others accepted it, leading to variations in style and nomenclature. Moo duk kwan, or “school of martial virtue,” evolved from tang soo do, and some practitioners parlayed that into tae kwon do moo duk kwan; Mr. Mayer has told me the forms we practice are in keeping with that approach. However, broadly speaking, mainstream tae kwon do places strong emphasis on kicking, whereas tang soo do and its close variants teach more of a mix of hands and feet. At Mayer’s, our drills include upper-cuts and hooks, blows most familiar from boxing. Some other hand moves we do might be more likely seen in a martial-arts movie: for example, the cobra strike, with two raised fingers poised to target someone’s eyes.

There’s always more to learn. Consider the ax kick. Your leg swings forward on a curve, then comes crashing down in a straight line. An excellent young black belt teaching me one-on-one recently worked on getting my leg higher; you want to be able to hit someone’s arm or even head from above. Then, he taught me a rare variant I’d never seen: the jumping ax kick. You start in fighting stance, oblique to your opponent with one leg positioned back, then jump up from your rear leg and rapidly bring the front leg up and down. It’s strenuous.

A front kick might seem like a simple thing: the knee rises, and the lower leg shoots out. But there are subtleties. You’re hitting with the top of your foot if you’re kicking upward; if the kick is more pushing forward, then the ball of the foot is the point of contact. With the roundhouse kick, the hips must be heavily involved. In the standard roundhouse, the front foot pivots as the rear leg rises and bends and promptly extends with force. A front-leg roundhouse, like a front-leg front kick, can be a swift, surprising move. A jumping roundhouse also uses the front leg, with the hip movement occurring as you’re in the air. One way to follow up on a roundhouse is with a spinning back kick, bringing the other leg around after your body’s rotated.

There are various stances. Most of our forms begin with a ready stance, two fists thrusting downward as if slamming someone’s groin. You’re supposed to step back into ready stance, not forward. Horse stance, with bent legs spread wide, appears in various forms and exercises, keeping you rooted as it builds leg strength. Attacking stance is a staple of drills, one arm in low block and the other ready to punch so a partner can practice blocks and counterblows. Cat stance has open hands, the front foot on its ball and the flat rear foot holding most weight.

As of recently, I’ve learned the last of 11 forms required in the dojo’s curriculum. Showing that I can do them all well will be key to getting a second black stripe on my brown belt, a step toward black belt. There are many challenges ahead, including ones of stamina, balance, flexibility and finesse. Brute power’s a relative strong point of mine, but not getting winded requires work; particularly under COVID protocols, as we’re currently masked in the dojo.

Still, I have hopes of continuing martial arts for decades to come. One of my fellow students, Ms. Becker, is a fourth-degree black belt who’s in her early-80s and still in regular attendance. She’s an inspiration to me and others, a reminder that many things are possible on the mat.