Penance in Pittsburgh during yet another season of defeat. 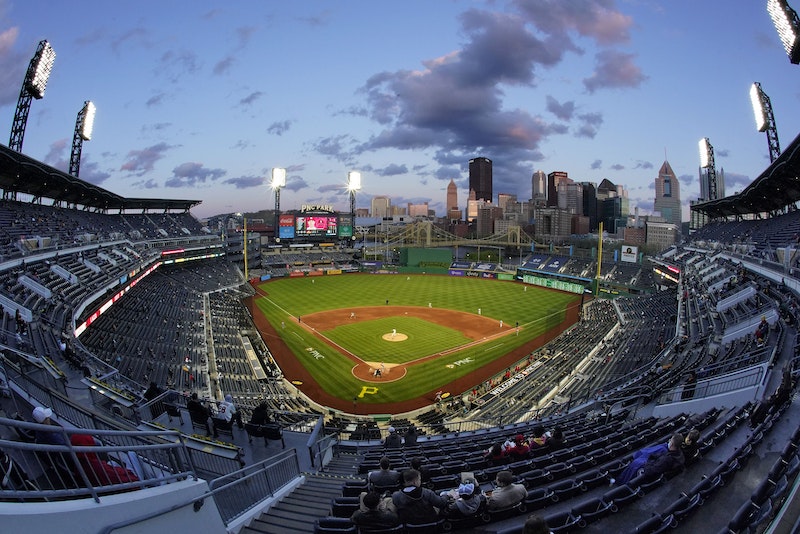 I went to a Pirates game in August. There were no vendors.

Since my first-ever Pirates game attendance in September of 1970 at Three Rivers Stadium, I was a six-year-old fascinated by these fellows drifting up and down the stairs in the aisles hawking everything from cotton candy, souvenir bats, megaphones full of popcorn and hot dogs and beverages. They circulated, they were colorful and wore oversized badges announcing the exact price of what they were selling. The popcorn megaphone, which I still have in my garden shed, was $1.75. Three Rivers was a new stadium, and we had Roberto Clemente in right field and Willie Stargell in left. Life was good.

Flash forward to the pandemic August of 2021. I bring my 16-year-old daughter to her seventh Pirates game at PNC Park. She has seen many stars come and go for the Bucs, starting with Andrew McCutchen, Pedro Alvarez and Josh Bell. We’d made signs for the arrival of Chris Archer, for the arrival of Bell, and this past August we made one for Hoy Park, whom the Bucs got from the Yankees in the Clay Holmes trade. Good for both teams, it appears, and our goldenrod sheet of paper was inscribed with the big Sharpie to read “Ahoy, Hoy!” and it added to the collection of signs we have made for the aforementioned Archer (“right on target”) and Bell (“wish you were here” postcard when they kept him in the minors too long).

So as we sat atop the Clemente wall this past August to see the Bucs take on the Cardinals, it felt like Spring Training. It was hot and sunny. There were about 7000 fans in the house for a laconic mid-week day game. There was plenty of space to stretch out over several rows.

But there were no vendors.

Absent was Tom Congdon of West Mifflin, PA, a vendor of 30 years at not just Pirates games but at Penguins hockey and Steelers football and any other major sporting event in the region. He was known for his trademark whistle while selling beer, and he was known as a great heckler of opposing teams so much that I once witnessed him have a 10-minute pregame back-and-forth with then-Marlins manager Ozzie Guillen while selling Miller Lite to the front row fans behind the dugout. Guillen seemed to have a history with the guy, and the banter was priceless and hilarious, and he’s in fact a well-known local character who played his high school football at Sto-Rox.

Now the pandemic hath wrought “contact free” interactions in which fans have to march to concession stands in the pavilions and use credit cards for each purchase. No cash, no aisle banter with squatting salespeople with local working-class accents. No Congdon trademark whistle or laughs with the heckling.

There were also Spring Training-like silences during the game. The organist must have been on several smoke breaks. We could easily heckle Cardinals centerfielder Harrison Bader (imagine the possibilities with that last name?) and you would know he could hear every word. This was in early-August, with the Pirates spiraling to 33 games under .500 having dumped several semi-superstars at the trade deadline, as is their wont. My daughter and I were amongst a mix of young families with tiny infants and a nursing home recreational outing population with seniors parked in the shade in wheelchairs atop the right field wall.

We were on the way to Ohio to visit relatives we hadn’t seen since before the pandemic, so we took in this day game to break up the drive. In previous years it was an extended weekend with hotel stays on the North Shore of the Allegheny. Now, thanks to Covid, it was a mere drive-by for some bad baseball so we could say we were there for the massive losing that unfolded during 2021, as another alleged “rebuild” was underway.

Entering through the center field gate near the Roberto Clemente statue, the elderly usher welcoming our cell phone-bound tickets had to squat awkwardly in the shadow of  a trash can in order to properly “scan” our tickets because of the bright sunshine. It was a painful endeavor for the old dude, and I was glad attendance was low and he wouldn’t throw out his back having to execute this maneuver in the name of allegedly high-tech developments. Also, there was no longer a free game program handed out. The PDF was available on the MLB Ballpark app, according to signage. Great, I need to be looking at my device while trying to watch an MLB game in person. Why not just stay at home? We were soon able to greet one of our favorite players, Gregory Polanco, “the baby giraffe” as he took his place in right field, just weeks before he would be doomed to his release from this pathetic squad which really should’ve kept him.

With the sun beating down on us, my daughter and I decided to wander the shady concourses of PNC Park, where you can pretty much see the game from any angle. Ex-Pirate ham and egger Wade LeBlanc was the emergency starter for St. Louis, so I was at the least optimistic that the Bucs could avoid the sweep at the hands of the Redbirds. Wrong again. Lars Nootbaar would hit his first home run ever for the Cards. His full name is Lars Taylor-Tatsuji Nootbaar and he’s not from Holland but instead the place where you left your wallet: El Segundo.

Colin Moran hit two home runs and the Bucs made it close, but Ke’Bryan Hayes would strike out to end the game with the tying run on base in a 7-6 loss for the Pittsburghers. On we went out of the parking garage traffic jam and into Ohio Amish country where non-vaccinated relatives made our visit more difficult than it should’ve been. My 91-year-old mother, whom we would traditionally take to a game during late summer, awaited our arrival in Ohio. Her father Walter was a passionate Pirates fan as a haberdasher in Butler, Pa., and I often conjure his fervor during the season with his scrutiny of the announcers, listening to radio (via MLB.com) while watching the game on TV (via DirecTV Extra Innings package) in honor of his preferences for the proper voice of the game as he used to do the same via KDKA radio and the local TV feed. I also frequently remind my mom that she has attended Pirates games at Forbes Field, Three Rivers Stadium and PNC Park and very few seniors can brag about that anymore.

The idea now as two weeks remain in the season, is to not lose 100. The Bucs are trying their best, having won four straight series in September with trips to Cincinnati and Philadelphia on the schedule, before closing out in early-October with a home series against the volatile Reds. Much like avoiding relegation in English soccer, trying not to lose 100 in MLB is a comparable humble chore that does provide a scintilla of thrill and something to follow. Arizona has already done it. Baltimore too. Let us not add our name to that ultimate loser scroll, something the Pirates have not done since 2010 when we dropped 105 games under nondescript manager John Russell. There was an inexplicable 22,279 in attendance on Friday, Sept. 24 of that year when the Astros beat us at home 10-7. Must’ve been a fireworks night.

For 2021 Pirates fans, it has been a damp squib, as the British say. We can only hope that cheapskate owner Bob Nutting will sell this historic franchise to someone who values victory.
Mark Cuban, Pittsburgh native, on line one.