A recurring preoccupation of aging writers. 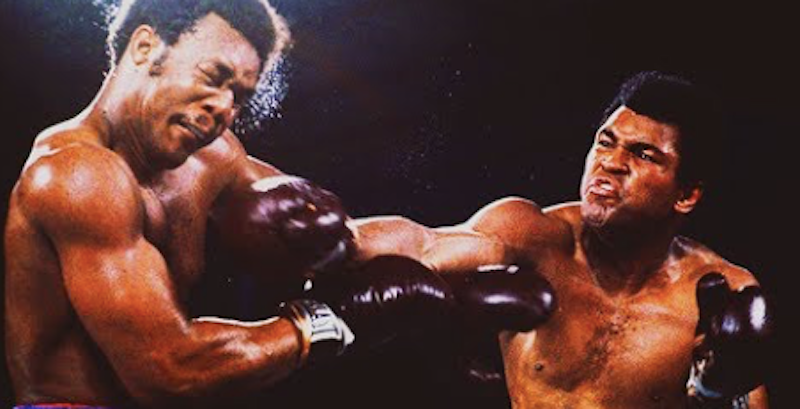 I’ve always been struck by the fascination that journalists, especially those of more or less my age, have with Muhammad Ali. And not only with Ali himself, but also, in a peculiar and maybe even despairing way, with the journalists themselves who covered the Ali phenomenon back in the 1960a and 70s.

This piece from an online magazine is the latest artifact that testifies to that fascination: a treatment of Ali’s 1974 “Rumble in the Jungle” with George Foreman in Zaire, an event that attracted many of the big stars of the American literary world of that time, including Norman Mailer, George Plimpton and Hunter S. Thompson.

The story is a familiar one to a certain set of readers. I must’ve heard it at least a dozen times over the decades, including via the 1996 documentary film When We Were Kings, which I saw in a Bloomington theater upon its release. (The movie’s release, of course, stimulated Baby Boom newspaper and magazine editors, then still in their prime, to run another hundred million stories about a boxing match that even then had passed out of the realm of current events and into history.) Among the story’s major motifs, present in every retelling, are the worshipful way in which the Zaire public embraced Ali; the same public’s cool if not hostile reception of Foreman, whom Ali, with his masterful publicity skills, succeeded in casting as something like an honorary white man, even a Belgian white man, a bad thing to be in the aftermath of Belgium’s colonial atrocities in what would become Zaire; the grotesque violence of the fight itself; and the misbehavior of the assembled American journalists, which tends to be described as raffish good fun and in a wistful tone, as if to say: We journalists were men then, soaked in alcohol and eager to cover blood sports, with a little bit of Hemingway still in us—and we knew how to have a manly good time.

This story has always made me uncomfortable. Powerful and moneyed white men, descending on Africa from the metropole to carry on and then, in print, intellectualize and even poeticize an entertainment in which two black men, born into the Jim Crow South, try to inflict brain damage on each other, if not kill each other—call me a closet liberal, but it doesn’t seem very nice. The whole scenario makes me think of the “battle royal” scene from the beginning of Ellison’s Invisible Man. The way that journalists have always openly sided with Ali, in the Foreman match as in every other of Ali’s matches, is also morally strange: the Mailers, the Plimptons, the Thompsons, are implicitly identifying themselves with Ali’s race-baiting of his opponents, Foreman included. (Ali expressed remorse for such behavior in later years.)

There’s also a despairing wish fulfillment aspect to all of this. Older journalists have presided over the absolute destruction of their now-despised and -distrusted profession, but in digging up the corpse of the Rumble of the Jungle they get to relive what was for better or worse a free, fat, pre-digital 20th-century moment in journalism—one that they pine for, because it was a good time to enjoy one’s “white privilege,” even as they helped end it.

At any rate, the next time some older journalist decides to write an article about Ali or the Rumble in the Jungle, maybe he should hold off, and write an article about why his cohort is so invested in the Ali/Rumble myth at all. Much more enlightening at this point! And if he’s got a couple of extra hours after getting all that done, he might explore the toxic effect that the “Hemingway myth” had on a generation of postwar journalists and writers.

By the way, the great popularity of boxing in Russia, particularly in its maximally brutal heavyweight version, is a blemish on that country. Those of us who admire Russian society as, in general, a model of enlightenment, are doing our Holy Mother no favors by ignoring its occasional real faults.