The Giants, the Dodgers and Baseball’s Collapsed Division 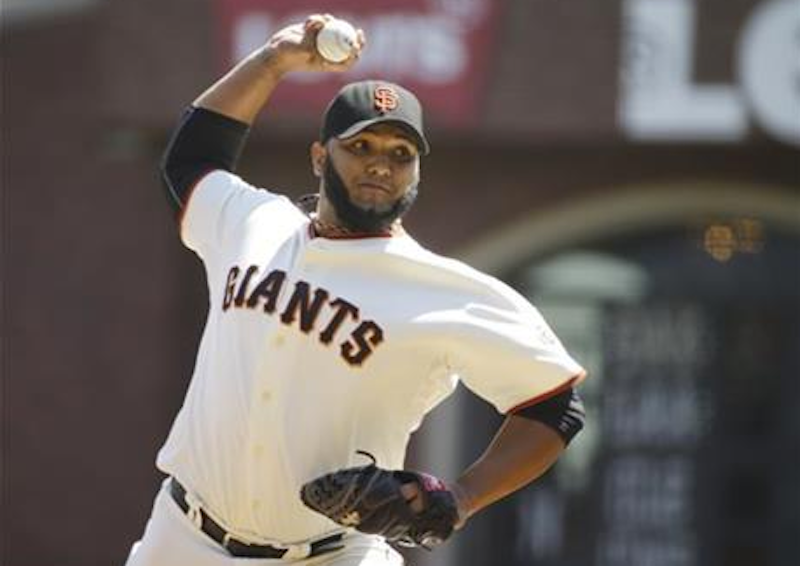 On Monday, June 9th, the San Francisco Giants were rolling. With a record of 43-21, the Giants had visions of securing the top record in the NL and home field advantage, while smacking home runs at an unusually high pace, especially for a team that plays half its games in AT&T Park (the second-most difficult MLB park to homer in, according to Baseball Monster's accumulated park factors).

Sadly, there were 98 games remaining in the season. The Giants dropped nine of their next 10, before winning a couple of close games in Arizona. The free-fall continued as they then dropped nine of 11, including a four-game set at home against the Reds. From Independence Day on, the Giants have been clawing their way back toward that early season form. Gone are the warm spring days that led to Mike Morse homers (13 HRs by June 3, only three since) and a healthy Brandon Belt (six HRs in April).

Gone from the rotation are stalwarts Matt Cain (lingering bone chips in his pitching elbow) and Tim Lincecum (lingering command issues, possibly related to mechanics, diminished velocity and confidence). Aging veteran Jake Peavy was acquired from the Red Sox at the trade deadline, when it was announced Cain would miss the rest of the year. Despite Peavy’s iffy first-half, manager Bruce Bochy had a suspicion he could wring some success out of his former ace (in San Diego). Banking on Peavy’s fly-ball tendencies playing well in San Francisco, the Giants have seen Peavy allow only two long-balls in 66 and 2/3 innings since the trade.

Lincecum, who continues to perplex with his erratic performances and wildness, has been replaced by 29-year-old Venezuelan Yusmeiro Petit. The switch took place in late August, two months after Lincecum threw a no-hitter against the Padres. One enormous caveat: those Padres finished June with the worst team batting average for a month in MLB history (.171).

I saw Petit’s efficiency in person last Tuesday when he simply shut down the punchless Diamondbacks, throwing a complete game, three-hit gem. He needed only 84 pitches to record 27 outs. Petit threw an astonishing 26 of 29 first-pitch strikes. Petit’s strike zone prowess has been downright Maddux-esque this year. Petit’s 118 Ks to only 18 walks tells some of the story. Yusmeiro’s splits tell more of the story: home ERA: 2.54, road ERA: 5.27. Pitching for Oaxaca in the Mexican League as recently as 2011, Petit seems to have re-invented himself and resuscitated his career in San Francisco, much like teammate Ryan Vogelsong, who journeyed to Japan to pitch for several seasons (2007-2009). Vogelsong’s MLB career has been about as smooth as those Oaxacan roads Petit was navigating. As a member of the Pirates in 2004, Vogelsong finished with a 6.50 ERA over 133 innings pitched (26 starts). I challenge any stat-loving fan to find a higher ERA for a pitcher who made 20+ starts over the last two decades. Surely, the steroid era was unkind to the man Bruce Bochy calls “Vogey.” And yet… here they are: Yusmeiro and Vogey, keeping the Giants afloat in the NL’s wild-card race.

Lincecum is lucky for two reasons: 1) Giants fans have an endless reservoir of love for him despite his erratic last few seasons because of the cult status he earned over his early career success; 2) No Giants pitcher can disappoint as steadily and for as long as Barry Zito did.

Los Angeles Dodgers’ Domination of Weak Competition: The Dodgers have a record of 37-15 against three of the worst teams in the major leagues, all of whom happen to reside in the National League West. The Rockies, Diamondbacks and Padres have provided the Dodgers with the illusion of a dominant season. Few expected much out of Colorado or San Diego heading into this season, but when you consider the losses of perennially-injured Troy Tulowitzki (365 plate appearances) and outfielder Carlos Gonzalez (279 PAs) in Denver and the absence of Paul Goldschmidt (470 PAs) in the desert, it becomes evident that the NL West has become even more of a pitcher’s paradise than it normally is.

It’s fair to paint the Dodgers as an offensively talented but highly flawed team heading into October. Still, they have Clayton Kershaw, who throws fireballs and flaming daggers, as well as the nastiest curveball in baseball, which the legendary Vin Scully has dubbed, “Public Enemy #1.” Kershaw will undoubtedly pitch two of those five possible games, assuming the Dodgers hang on to the NL West. With 11 games remaining (as of Sept. 17), the Dodgers lead the Giants by three games. The two teams will meet for a three-game series beginning Monday, September 22.

One interesting fact to note: the Dodgers have a 20-20 record in day games. Among NL playoff-likely teams, only the Pirates (22-29) have a worse record in day games. San Francisco’s record is 36-23. Why does that matter? The NLDS often includes a few scheduled day games, to accommodate the television broadcasts of all four playoff series.

For all of that to matter, the Giants will need to win the wild-card/coin-flip game, likely behind ace Madison Bumgarner. If they advance, baseball fans will get an opportunity to see whether Yusmeiro Petit can continue his strike-throwing magic in October.