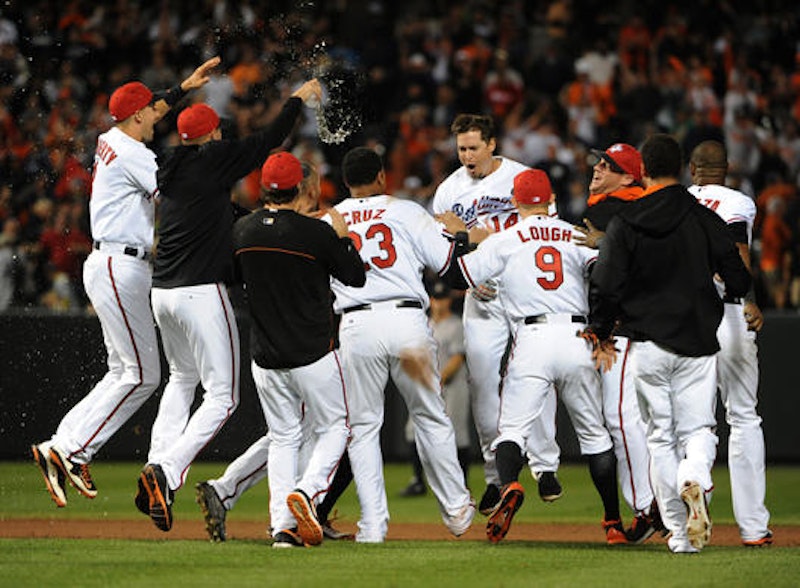 My five-year-old daughter started kindergarten last month. About a week into life as an elementary school student she decided that she wanted to buy lunch on Pancake Day. At 8:30 a.m. she went to school excited to eat pancakes for lunch. By 11:35, she’d spilled maple syrup all over her clothes and made an impromptu appearance at the nurse's office for some new threads. She was nearly as upset that she had to wear the leftover clothes as she was to have missed out on the pancakes. I had to take a clean outfit to school to slow the flow of tears brought on by the trauma of wearing "everybody's clothes."

On the last day of August the Baltimore Orioles acquired a player who could best be described as "everybody's infielder." When Baltimore dealt a pair of journeyman minor league infielders to the Red Sox for Kelly Johnson the move was generally met with a shoulder shrug. Johnson had washed out in a half season with the Yankees before being shipped to Boston for the equally inept Stephen Drew. Before signing with New York last offseason Johnson had slammed 16 home runs for the Tampa Bay Rays. Johnson also hit 16 homers for the Blue Jays in 2012. The trade to Baltimore completed Johnson's nomadic tour of the American League East. Johnson figured to spend most of September sitting next to Buck Showalter on the Orioles' bench and serve as a late inning left-handed pinch hitter.

The plan for Johnson changed drastically when Chris Davis was suspended 25 games for violating the league's drug policy last week. Suddenly "everybody's infielder" was the third baseman for the division leading Orioles. The Davis suspension is just one more test for Showalter and his Orioles. Despite playing most of the season without All Stars Matt Wieters and Manny Machado in the lineup, Davis hitting below .200, and a series of disastrous starts from $50 million free agent pitcher Ubaldo Jimenez, the Orioles have clinched their first division title since 1997.

Johnson quickly secured a place in Orioles' lore on Sunday night when he drilled a David Robertson pitch into the right centerfield gap to score the game winning run in another vintage walk-off win. Johnson won't make fans forget about Manny Machado at the hot corner, or Chris Davis at the plate, but he’s a veteran player with experience at third base and the ability to hit both left-handed and right-handed pitching. Showalter has an uncanny ability to use his entire roster and put players in a position to succeed. If the Orioles are going to make an extended run through October they'll need contributions from the entire roster. Kelly Johnson, an afterthought just last week, will, for better or worse, get plenty of postseason opportunities.