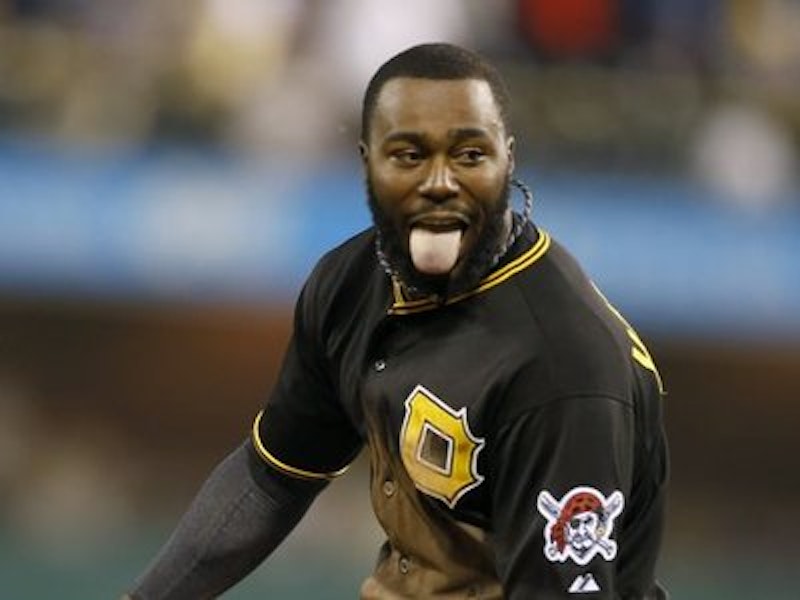 There was a storefront church on Emerson Place in Brooklyn—I believe it was called “Pentecostal Uprise Station #2”—that had a mean Bible verse painted on its battered security gate looking out over a grim corner of Myrtle Ave. I lived on that block for 13 years, and in 1990 it was a good place to get mugged. My tour was unscathed by street crime, and I credit that Pentecostal security gate as my good luck charm. It read: “No weapon formed against me shall prosper.” It was from the Book of Isaiah, chapter 54, verse 17 or so. I looked it up in a King James Bible and it’s the Lord’s people telling you all not to be haters, so don’t even try, fitting in with the entire book which speaks of God’s judgment and salvation and stuff that might emerge in a future Quentin Tarantino screenplay.

So it was no surprise, then, that the current National League batting average leader’s middle name is Isaiah. He is Joshua Isaiah Harrison, for several seasons a bench/utility player with the Pittsburgh Pirates who came over as a minor league throw-in as part of a ho-hum trade with the Cubs back in 2008. Now he is known as “J-Hay Everyday” as he’s emerged as kind of a black Ichiro this season, thrust into the starting line-up by virtue of his torrid hitting, clutch fielding and all-around gung-ho approach.

The Buccos would not presently be affixed to the NL wildcard without this Cincinnati native in uniform. Yes, reigning MVP Andrew McCutchen made his second Sports Illustrated cover appearance last week in a rather vanilla feature penned by Albert Chen. But if SI was going for the real story of the Pirates stoic 2014 run for a second straight playoff berth, Josh Harrison would have fit nicely on that cover. He was the “unlikely” All-Star back in July and was NL Player of the Month for August with numbers that would make Dallas Green blush.

Wherever Pittsburgh manager Clint Hurdle puts him, Harrison succeeds and inspires. Harrison’s confidence has the team awash in swagger during times when the entire franchise was accustomed to folding up into a single IKEA flat pack when the pressure was on. His “highlight” reel includes elusive baserunning skills defying the logic of the rundown “pickle” twice within a few midsummer weeks; multi-hit games and key late-inning RBI’s; amazing outfield catches and infield snags and epic at-bats with dozens of foul balls running up pitch counts. The beauty of this off-the-bench business is Harrison now has enough plate appearances to qualify for the National League batting title during this season of anemic batsmen. And of course this past Sunday he had two more hits, two more RBIs and started an around-the-horn 5-4-3 triple play which hadn’t been seen in Pittsburgh since that terrific 1979 season of fam-a-lee togetherness. The triple play was a game-saver and helped spark a Pirates comeback as the Bucs were down 3-0 at the time and would go on to finish off the Cubbies 7-3 to win another crucial September series.

Harrison’s number 5 jersey wasn’t even for sale in the souvenir shops at the start of the season; now the Steel City is abuzz with Harrison talk, many remembering last season when his equally demonstrative mother Bonita stared down the Cincinnati Reds after their pitchers buzzed her son at the plate one too many times. Harrison has been interviewed a million times during his 2014 uprising, and he always quiets the astonished questioners by saying “I know what I am capable of.” And then he moves on. Harrison’s free-swinging ways give the Sabermetic guys hives and sometimes his batter’s box demeanor and three-act swing reminds me of Manny Sanguillen back in the 1970s. Contact he makes, and off he goes. He’s a catalyst and a pest and his days of being overlooked by the opposition are over. There he is now at the top of Hurdle’s batting order, tapping the toes of both cleats with his bat before stepping in to stare down his mound foe.

As for the batting title, with only two weeks to play, Colorado’s golem-like Justin Morneau sits with a nagging injury at .315 while Josh was at .317 as the Red Sox come into Pittsburgh Tuesday for interleague action. Teammate McCutchen, who on-field persona has gotten super cool and more subdued as Harrison has become more gregarious, is third in the race with a .312 clip. In a way, Harrison has become McCutchen’s intern. Hustling and impressing the boss (who is also 27) to the point where he might just outhit his superior and get his name on a plaque or two.

Harrison’s work ethic began in the minors, winning two league championships (with Lynchburg and Altoona) accompanied by current Pirates teammate Jordy Mercer, who is having a fine year at shortstop. For the second season in a row, the Pirates have been a very fun team to watch and he’s been a big part of the flowing joy.

The Bucs can be a bit showy (but not too cocky) in their celebrations both in the dugout and on the field. Role players abound with the Gaby Sanchez/Ike Davis platoon at first, and a right field revolving door of Travis Snider, Gregory Polanco and Jose Tabata. Pinch hitters have been reliable. The team is strong up the middle, beginning with the intense sanity of catcher Russell Martin, Mercer at short and Neil Walker having a great year at second base, and of course McCutchen anchoring center field. The corner infielders have underperformed so far, though Harrison is changing with every game he starts at third. That’s where Pedro Alvarez used to be, but a foot injury might have ended a frustrating season for the 2013 home run guru who developed throwing yips from third base that forced a brief move to first base until he got hurt.

Perhaps the spotlight can no longer elude Harrison, especially with the wild card and divisional battles looming on the horizon for these Pirates.