Countdown: When Will Roger Goodell Resign?

And Baltimore Ravens officials as well. 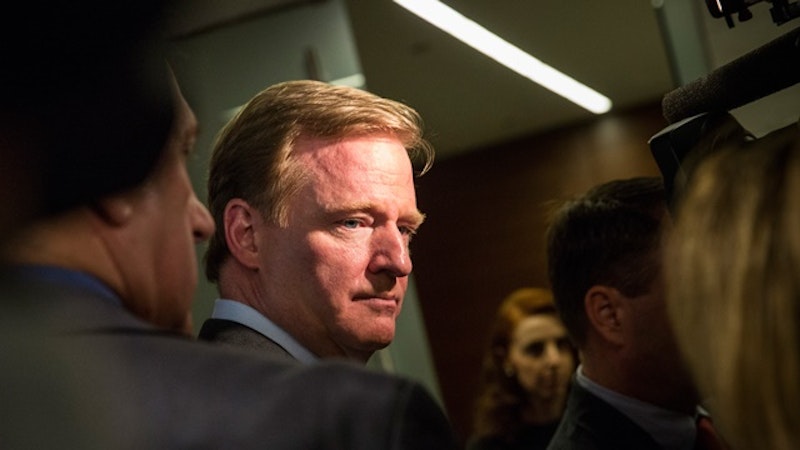 NFL Commissioner Roger Goodell has asked former FBI head Robert Mueller to investigate and determine whom in the NFL knew about the video and when they knew it.

What does it matter who saw the video and when? The video surfaced after NFL and Ravens organization officials already knew what had taken place based on the physical examination of Janay Rice as well as statements made by her, Ray Rice and witnesses. The official police report stated, unequivocally, that Ray Rice hit Janay Palmer hard enough to render her unconscious.

The looming question is… given the statements, physical evidence, and official police report findings, clearly showing what had taken place, why was it not enough for the NFL and Ravens to take the same stance they did when the video surfaced?  It's the same crime: it was obvious what happened. The means of committing the crime and the end result were exactly the same.

I'll tell you why. When that video was released, the people were in an uproar. Seeing those violent images both sickened and angered the American public. Seeing the images that supported what the NFL organization already knew, they wondered how in the world it rendered a mere two-game suspension. They demanded to know why the NFL and Ravens didn't do more.

Shortly after that video was released, the NFL and Ravens scrambled to do damage control. In the end, all they did was create a major clusterfuck of epic proportions. After initial uproar over the announcement of the two-game suspension, Roger Goodell admitted he screwed up. Yes, he did. He made a grievous error that cannot be explained or undone and as such it is in the best interests of the NFL for Goodell to step down. What he did after the video surfaced doesn’t matter, it’s what he did before that speaks to his leadership abilities. His failure to do the right thing when he had the chance will be his legacy and that of the NFL as well. He had a responsibility to uphold a code of conduct and values the NFL claims it demands of its organization.

It failed. He failed.

When the people lose faith in one’s ability to lead, that person must go. It may seem symbolic but it’s necessary for any organization to move on. The same may have to happen at the Ravens organization. It's the only way the two will recover and gain the trust of their fans once again.