Adam Jones Is the New Face of the Orioles 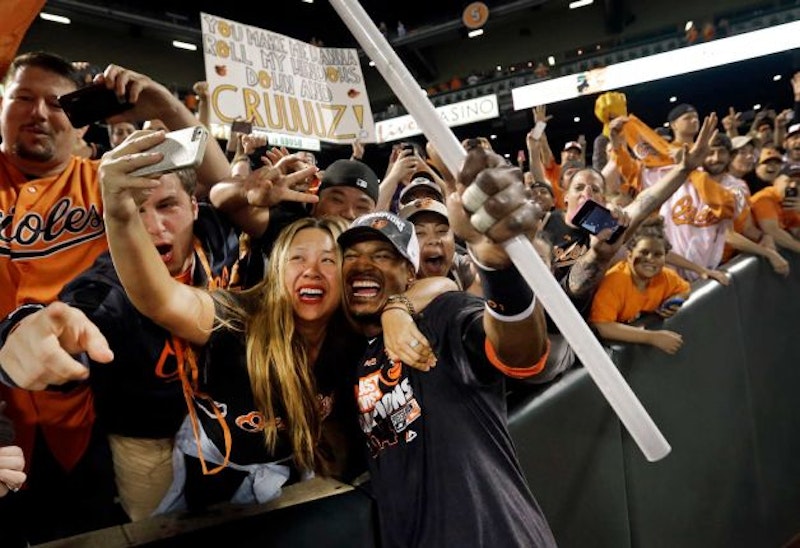 Cal Ripken has been the face of the Baltimore Orioles for as long as I can remember. The home-grown, blue-eyed, "Iron Man" retired more than a decade ago but he’s still the most recognizable figure associated with the franchise. Adam Jones is on a mission to finally push Ripken into his rightful place in Orioles history.

The Orioles have undergone tremendous change since Jones arrived in a 2008 trade with the Seattle Mariners. Jones was a promising 22-year-old prospect and the Orioles were a hopeless punching-bag for the Red Sox and Yankees, and just about every other American League team.  Jones has evolved into a perennial All Star, Gold Glove winner, and fan favorite as the Orioles have morphed into a winning team.

On Tuesday night, Baltimore defeated Toronto and secured its first American League Eastern Division title since 1997. The win brought closure to a 17-year drought that featured more embarrassments than any franchise should have to endure. There were blowout losses (30-3 to the Rangers), fallen heroes (Raffy Palmeiro), inept managers, over-the-hill free agents, Jack Cust base-running blunders and wasted draft picks.

The 2014 Orioles are fueled by the surprising Steve Pearce, Nelson Cruz, the shrewd dealings of Dan Duquette, a stellar bullpen, the guiding hand of Buck Showalter, and the leadership of Adam Jones. After the players had their fill of champagne following Tuesday's win they made their way back to the field where a raucous and adoring crowd remained. Jones took an Orioles flag on a victory lap around the warning track and collected high fives and hugs in a scene that brought back memories of Cal Ripken's own Camden Yards victory lap after he broke Lou Gehrig's record for consecutive games played. The major difference was that Ripken, as he did for much of his career, celebrated an individual achievement whereas Jones was reveling in the success of his team.

Ripken is one of the greatest players in baseball history but he sadly played for middling, or downright awful, teams for most of his career. When Camden Yards opened it was celebrated as baseball's next great cathedral but the headliner was always Ripken. As Ripken neared major career milestones the Orioles' PR department took to running countdowns using oversized numbers on the exterior of the B&O Warehouse. A novel idea became almost comical as the team sunk further into dysfunction and irrelevance.

Tuesday's celebration, and Jones' role as the master of ceremonies, swept nearly two decades of frustration under the tarp. The crowd and Jones’ teammates were feeding off that enthusiasm as fans lined up to gleefully get smacked in the face with one of his patented post-victory whipped cream pies. Even Showalter cracked a smile.

Adam Jones isn't a perfect baseball player but no one has more fun playing the game. Yes, your grandpa will grumble because Jones blows bubbles while catching fly balls and flails wildly at sliders off the plate. He also plays hard every day, serves as the voice of the team, is remarkably consistent and productive, and has the full support of Showalter. Mostly, Jones reminds us that baseball is fun. Jones will never supplant Cal Ripken Jr. on the list of all-time great Orioles, but he’s established himself as the face of the franchise and the poster boy for Baltimore's baseball rebirth.