The crowds at Baltimore’s Camden Yards are unfailingly polite. 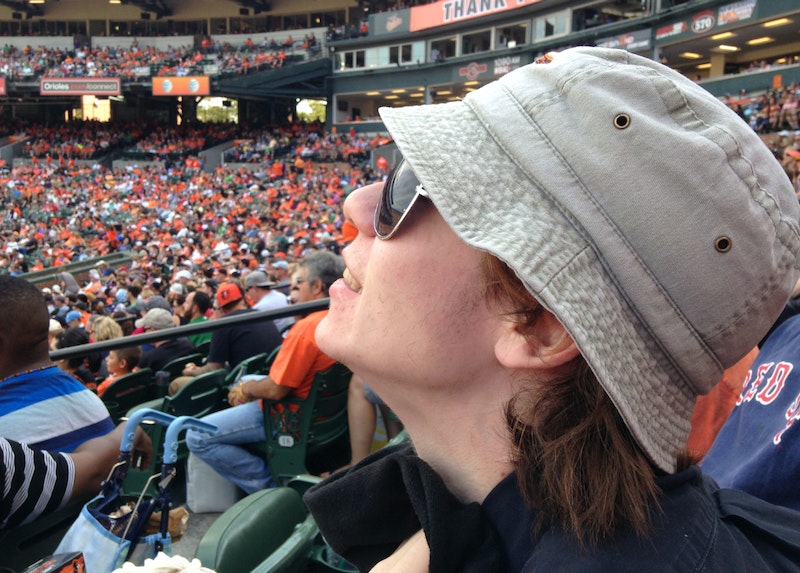 My wife, sons and I were jammed into Section 48 at Baltimore’s Camden Yards on Sunday afternoon watching the October-bound Orioles play the last-place Red Sox, and early on I loudly cheered for Boston’s newest player, Cuban defector Rusney Castillo. The fellow next to me, decked out in O’s gear, didn’t at all mind my enthusiasm; instead, he said, “Looks like your team will be contending next year. Castillo, Betts and Cespedes, all great additions.” A cynic might chalk that up to gratuitous happy-talk, considering the respective fates of the O’s and Red Sox in this strange season of 2014. But that’s not the case: even during the depths of Baltimore’s long run of futility—which didn’t turn around until two years ago—local fans never got testy with me, or my son Booker, when better Red Sox teams dominated the Birds. I’ve been to almost 20 ballparks over the decades, and the throngs at Camden Yards are, with the exception of night-game drunks, are a devoted and congenial fan base. Needless to say, it’s not the same at Yankee Stadium, where wearing a Red Sox hat isn’t for the timid; and, hate to say it, but the behavior at Fenway Park can get downright ugly.

We often attend the last regular-season game at Camden Yards—at least since moving to Baltimore in 2003—just to put a stamp on another year of baseball coming to a close. A year ago, by a quirk in the schedule, the finale at Camden Yards was also against Boston, and it was a mellow crowd, disappointed that the Birds were squashed, while the Sox would proceed to what was a highly improbable run that resulted in their third World Series championship in a decade. There’s a sort of invisible pageantry at the last game: no bunting or high-roller bandwagon jumpers in evidence, but seeing the various vendors, ushers and familiar faces for the last time until next April makes for an oddly comforting, if melancholy afternoon. Usually, I get my last sunburn of the summer (and the rolling pin from my wife, given my fair skin.) As I’ve written previously, I’m a one-sport guy—couldn’t care less about the NFL, which may be contagious for obvious reasons, hockey, basketball or college sports—so I’m out of the loop, save watching MLB’s trades and free-agent signings unfold, as a spectator for half the year. Truth be told, I don’t know how people who migrate from sport to sport, equally passionate, can ever get anything done: keeping up with the Sox during the season saps my energy.

The game itself, as Baltimore Sun reporter Dan Connolly wrote, ended “with a whimper” for the O’s as Boston’s Joe Kelly pitched a great game, Mookie Betts (just 21 and possibly the next franchise player for the Sox, unless GM Ben Cherington stupidly flips him in a trade) hit a lead-off homer, mid-season arrival Yoenis Cespedes singled in a run and Castillo played well in center field and had another hit. David Ross, the graybeard back-up catcher, smacked a rare home run, probably his last for the Sox, since it’s unlike he gets re-signed. The Sox won 3-2, and honestly, I doubt the Orioles fans were too upset. After all, they’ve got bigger fish to fry, with the upcoming ALDS against Detroit or Kansas City on the horizon. My wife is an O’s partisan, and is tickled her team’s moving on to October, and she thoroughly enjoys the seventh-inning stretch, the Kiss Cam and all the other Jumbotron features that I’ve never gotten used to. Booker, when the O’s were at the plate, buried his nose in an economics book for school, although he and Nicky gabbed about music throughout the game, identifying the songs played between innings. (As always a mix of great and atrocious tunes: the Smiths and Echo & the Bunnymen on one hand, Journey and Dave Matthews on the other.) And Nick, like half the crowd, paid more attention to his iPhone than the action on the field.

As for me, as long as the Yankees don’t make the post-season—I made peace with Boston’s lost year in June—I have no real rooting interest in the playoffs, although an O’s/Nats World Series would be pretty cool. On the topic of the Yanks, this Sunday will mark St. Derek Jeter’s final game of his Cooperstown career, and it’ll be at Fenway. I plan to watch, although will mute the TV as Sox fans give Captain Intangibles a Standing O, and NESN’s Jerry Remy and Don Orsillo say all the right things about the shortstop who hasn’t acquitted himself too well this year. At least that’ll finish his endless “Retirement Tour,” which has annoyed me all season.