The Future Stars of the Baltimore Orioles

The team was quiet in the off-season, but was smart to keep its prospects. 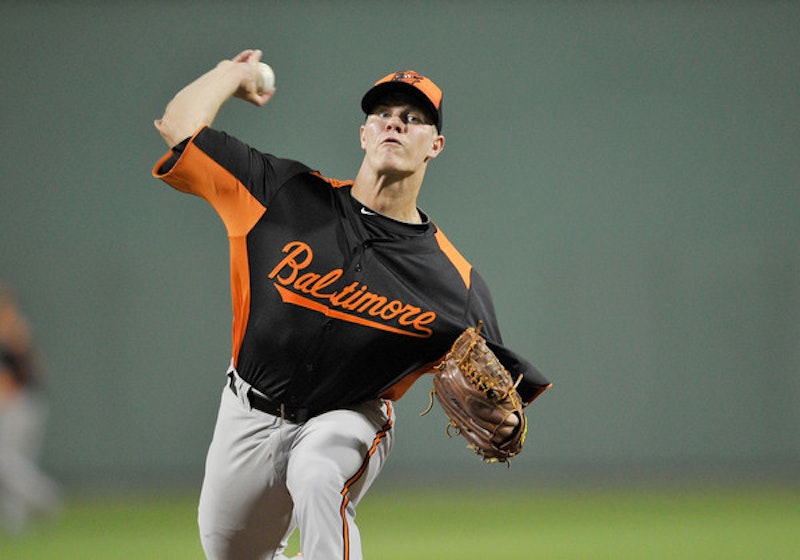 Baltimore sports fans reeling from the Ravens’ free agent exodus caught a glimmer of hope on Thursday afternoon from a pair of young Orioles pitchers. Baltimore started Kevin Gausman, the club’s first round pick in the June 2012 draft, against the Tampa Bay Rays; he was followed to the mound by Dylan Bundy, the ballyhooed boy wonder of the Orioles’ farm system.

Gausman got off to a slow start, walking the first two batters of the game before settling down. The 22-year-old right-hander from LSU left the game with two outs in the top of the third inning after reaching his pitch limit. He surrendered a single run but walked three batters on the day. Gausman has out-pitched most of his more established competition in the battle for the fifth spot in manager Buck Showalter’s rotation. He currently leads the Orioles in innings this spring and has clearly caught the eye of Showalter. While it remains unlikely that he will start the season in Baltimore it’s becoming increasingly clear that he has what it takes to contribute to the Major League club this season. Gausman pitched just 131 innings combined between college and the minor leagues in 2012. The Orioles could have him start the season in Double-A Bowie and limit his early season workload, just as they did with Bundy in 2012, so that Gausman may be able to contribute meaningful innings to the Orioles late in the summer.

Bundy was no less impressive. He’s technically still in the running for the fifth spot in the rotation but the Orioles will likely re-assign him to the minor league camp in the next week to allow him to prepare for the minor league season. Bundy was hampered by a groin issue last week, and his velocity suffered, but he appeared to be healthy on Thursday afternoon throwing easy gas to the Rays hitters. Bundy has been uncharacteristically wild this spring walking six batters in eight innings of work. The 20-year-old has allowed just one earned run on six hits in those eight innings. Bundy pitched 105 1/3 innings between three minor league stops and a late season call up to the Orioles last year. He’ll likely begin the season at Bowie alongside Gausman.

The other top Orioles prospect this spring is infielder Jonathan Schoop who’s just 1-for-1 in Grapefruit League play. Schoop, Baltimore’s third rated prospect according to most publications, is the starting second baseman for the Netherlands in the World Baseball Classic. The 21-year-old infielder struggled at the plate in Double-A last season but turned in a solid performance in the Arizona Fall League and is backing that up with an impressive run in the WBC. Schoop nearly hit for the cycle in a game earlier this week and has clubbed two home runs and driven in six in seven games for the Netherlands. The native of Curacao has played all over the infield in Baltimore’s minor league system and projects as the club’s third baseman or second baseman of the future. Schoop is expected to get an extended look from Showalter when the WBC comes to an end. He has little to no chance of making the Orioles team out of Spring Training but he could lay the groundwork for an in season call up.

Gausman, Bundy, and Schoop have provided some hope this spring to the fans who lamented Baltimore’s lack of offseason activity. The Orioles failed to make a major trade or signing after making a surprise run to the playoffs in 2012. GM Dan Duquette was criticized for his unwillingness to part with young talent in trades but Baltimore has waited years to have a group of premium prospects. The Orioles haven’t had a pair of young pitchers as highly regarded as Bundy and Gausman since the days of Mike Mussina and Ben McDonald. If Brian Roberts falters in his latest comeback, Schoop could soon join 2012 phenom Manny Machado in the Orioles infield. While outsiders may claim that these are the same old Orioles this collection of impressive youngsters will soon have the opportunity to prove otherwise.