Baltimore has lost players, but will still field a playoff-caliber team. 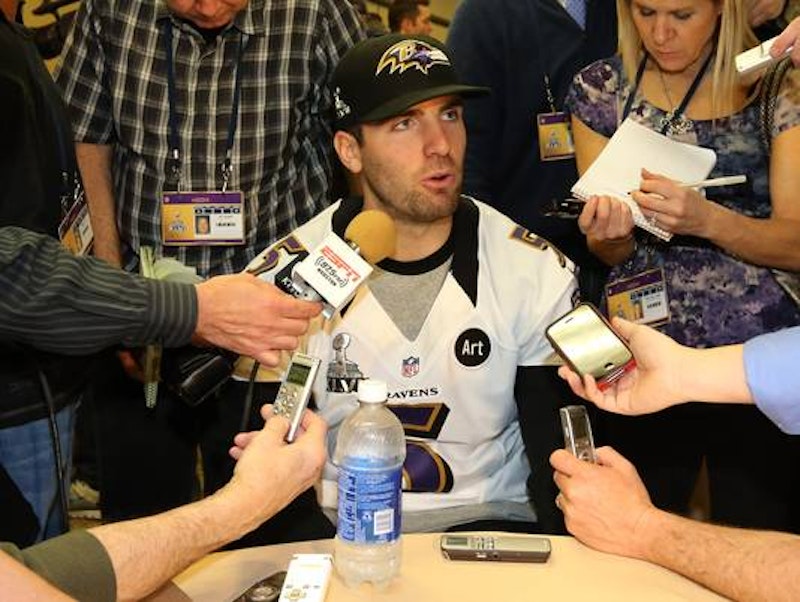 Baltimore Ravens fans still reveling in a post-Super Bowl high were hit with a gut punch on Monday afternoon when fan favorite WR Anquan Boldin was shockingly traded to the recently vanquished San Francisco 49ers. The deal gives the 49ers a sure handed replacement for Randy Moss and leaves Baltimore with a gaping hole on its depth chart. Ravens’ GM Ozzie Newsome’s experience with expertly guiding the franchise through salary cap issues and roster construction in the past is of little consolation to the average fan.

In the annual state of the Ravens press conference last month, with the Lombardi Trophy prominently displayed, Newsome spoke openly of the mistakes his front office learned after its first Super Bowl win. After the 2000 Ravens captured the city’s first NFL championship in 30 years Newsome brought back several aging starters and signed free agent QB Elvis Grbac in an attempt to repeat. The 2001 Ravens went 11-5 but flamed out in a disastrous 27-10 loss to the Steelers in the Divisional playoffs. Grbac surprisingly retired after the game and Newsome was forced to jettison veterans in an effort to get under the salary cap. The Ravens went through several rebuilding years, and the Kyle Boller experience, before emerging as Super Bowl contenders in 2006. Last month, Newsome vowed not to make the same mistakes again. He plainly stated the organization’s goal to compete for titles on an annual basis. Newsome specifically said that the team would not restructure the contracts of current players solely in an effort to gain cap space.

Given Newsome’s post-Super Bowl comments the Boldin trade shouldn’t have been a total shock. Loads of ill-informed fans will no doubt blame the $120 million contract signed by QB Joe Flacco last week but Flacco will count just $6.8 million against Baltimore’s cap in 2013. Boldin would have counted $7.5 million against the 2013 cap. If fans want to blame a player for not taking less money then Boldin, not Flacco, should be the object of scorn. Baltimore reportedly wanted Boldin to take a pay cut to $4 million for the upcoming season. Boldin and his agents called the Ravens’ bluff and the team traded the 32-year-old wideout to San Francisco. Boldin could have been a Raven in 2013, he just couldn’t be a Raven making $6 million. It wouldn’t be surprising if the team took a similar stance with fullback Vontae Leach in the coming weeks.

So where do the Ravens go from here? The list of available free agent receivers offers few options for a team looking for a bargain. The Ravens are likely to address their needs at linebacker and left tackle before making a run at a receiver. It’s likely that TE Dennis Pitta, who had a career year in 2012, could be a bitter focus of the Ravens passing game next season. Offensive coordinator Jim Caldwell could run more two tight end sets with Pitta and Ed Dickson on the field together. Bernard Pierce, who emerged as a dynamic playmaker in his rookie season, could also play a bigger role in the offense next season with Pierce and Ray Rice perhaps taking the field together in some offensive sets. The Ravens typical “next man up” mantra could also mean additional opportunities for young WR Tandon Doss. The former fourth round pick out of Indiana hasn’t done much as a pro to this point but at 6’2” 207 lbs. Doss is similar in stature to the departed Boldin. Doss is best remembered for dropping several passes in a playoff win over the Colts in January, but the Ravens clearly drafted him for a reason and it may be time for him to get on the field. The Ravens could also sign a mid-level free agent receiver like Kevin Walter or Austin Collie to compete with Doss.

Many fans may scoff at the Ravens receiving “only” a sixth round pick from the 49ers in the Boldin trade, but the important thing is that Baltimore now has 12 total picks in the April draft. The team picked up salary cap flexibility with the Boldin trade and has ample trading flexibility with its bevy of draft picks. My guess is that Baltimore will be one of the more active teams in the league come draft time with Newsome moving up and down the board to select the college players he most desires. Baltimore may even come away with a wide receiver in the draft’s early rounds.

I understand the knee-jerk reaction of most fans and the desire to bring back everyone from a championship squad, but the Ravens clearly know what they’re doing. The salary cap era makes everyone play by the same rules and rewards the teams that draft and develop the best players. Teams like Cleveland, Buffalo, and the Jets always seem to be active in free agency but have little on-field success to show for it. Ravens fans should brace for additional losses: already Paul Kruger’s signed with the Browns and Dannell Ellerbe has gone to the Dolphins; we’ll see if Ed Reed and Cary Williams defect. The Baltimore front office has one of the best track records in the NFL: I trust they’ll recover from the changes a championship team goes through.