“Sports Heroes” is a Dated Phrase 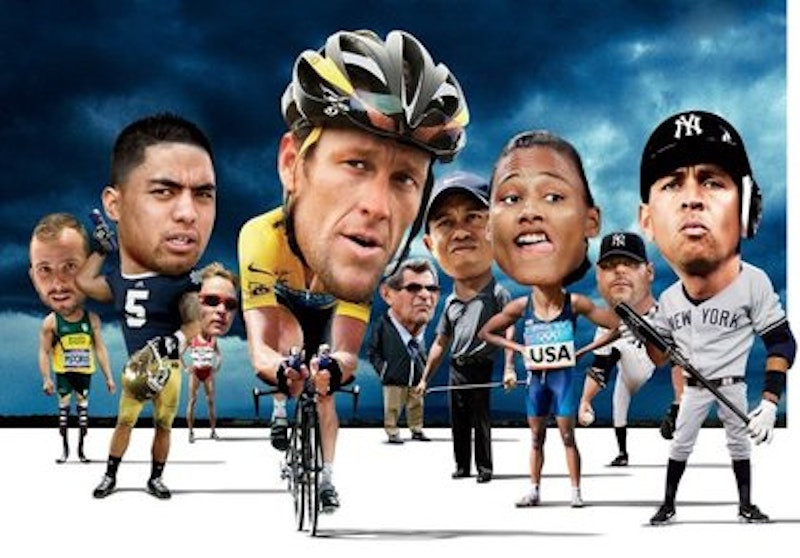 Perhaps I’m wrong, but the guess here is that Vanity Fair columnist James Wolcott isn’t much of a sports fan. As I’ve noted previously in this space, Wolcott remains one of America’s few erudite (and delightfully acerbic) pop culture critics, equally knowledgeable about the high-, middle- and low-brow, sparing no individual or company in his VF essays and blog posts. But his April offering, claiming that the downfall of athletic superstars is about the only news/gossip that can cause the scandal-jaded American public to arch an eyebrow is all wet.

He writes: “Newspapers, those that plaintively remain, should print their editions back to front, because the sports pages are where the nation’s true psychodramas rip open and flutter, exposing the hypocrisies we hold dear and destroying whatever illusions we still have hanging around the house.” Wolcott doesn’t do much heavy lifting to back up his case, citing Lance Armstrong, Tiger Woods, Oscar Pistorius, Joe Paterno, Alex Rodriguez, Michael Vick and Manti Te’o and their tumbles from superstar grace. Not much new there; in fact, Woods, whose philandering (after living in a protective bubble, he “[raised] a private ravenous revolt against repression by acting like Fredo in Las Vegas, diving headfirst into the nearest cocktail waitress”) is sufficiently non-toxic that President Obama recently played a round of golf with him in Florida.

Wolcott’s correct that the public is used to bad behavior from those who, in a far different era were respected: politicians, lawyers, bankers, priests and doctors, among other professions. The military, at least the rank and file, gets a pass, since it’s bad form to criticize the men and women who risk their lives on our behalf. Musicians and actors were never held in high esteem as they lived by, and flouted, a different set of rules, and that was part of the tabloid fun. In the early 21st century, I’d say that the only set of high-rollers left untouched by revelations of revolting behavior are the technology household names. A baseball player exposed as a cheater? Yawn. But imagine the jaw-dropping if, say, Bill Gates or Mark Zuckerberg was nabbed by TMZ, The Huffington Post, The New York Post or Buzzfeed in a sex/corruption/exploitation web of lies. That’d be news that would keep Matt Lauer’s gums flapping for weeks on end.

In reality, once athletes started earning million-dollar salaries they became fair game for the media; it’s not just the PED stories that’ve tarnished various Olympians and ballplayers, but also, for example, the wife-beating charges leveled against Daryl Strawberry, the career-shortening substance abuse of Dwight Gooden or the gambling that’s kept Pete Rose out of the Hall of Fame. Miguel Cabrera, Tony LaRussa and Todd Helton, to just scratch the surface have been given DUI’s by cops, resulting in much public contrition.

Incredibly, Wolcott doesn’t once mention the most infamous sports celebrity gone to seed in the past 20 years… O.J. Simpson. That lengthy saga alone—the live car chase, “if the glove doesn’t fit, acquit,” the subsequent trips in and out of jail—should’ve made Wolcott think, hmm, maybe this isn’t such an original topic, after all.

Going back several decades, New York Yankees’ pitchers Fritz Peterson and Mike Kekich caused a huge stir in the sports world by announcing in 1973 that they’d swapped families—wives, dogs and children. Such libertine behavior wasn’t uncommon in Hollywood at the time, and later spread to other hedonistic enclaves, but among ballplayers? Momentous, even if Peterson and Kekich weren’t, until the revelation, known to many. Jim Bouton’s Ball Four in 1970, probably the first non-airbrushed look at sports, including stories about icon Mickey Mantle and his Yankees teammates going on “beaver hunts” and other activities not conducive to Wheaties endorsement deals, was a refreshing read (if tame by today’s standards).

Wolcott may be alone in his quasi-sympathy for A-Rod, now one of America’s most despised athletes. But he gets it wrong, writing, “The orchestra is just tuning up for the humiliation that Alex Rodriguez will be hearing this spring. A-Rod may be a rich phony, so why do I feel a little sorry for the guy?” I don’t understand that feeling, either, James. The “humiliation” certainly won’t be from fans at Yankee Stadium or other ballparks, since Rodriguez is expected to miss at least half the season with a hip injury and will be re-habbing in New York.

Still, whether or not Wolcott’s on firm footing when it comes to sports, he’s still entertaining. This sentence is a doozy: “Sportswriters and talk-show radio hosts expectorate their opinions like gobs of tobacco juice, the last throwbacks to the Front Page newsroom of wisecracking cynics and staccato stylists, Oscar Madisons in a world of Felix Unger metrosexuals, but beneath their crusty layers rests a soft caramel center.” Never mind that Front Page references are recognizable only to an aging reader, or, more importantly, that all the “staccato stylists” on the sports beat have either died or been laid (or bought) off, Wolcott’s a very funny guy. Even when he fucks up.