Boston’s top prospect should start the season in the minors. 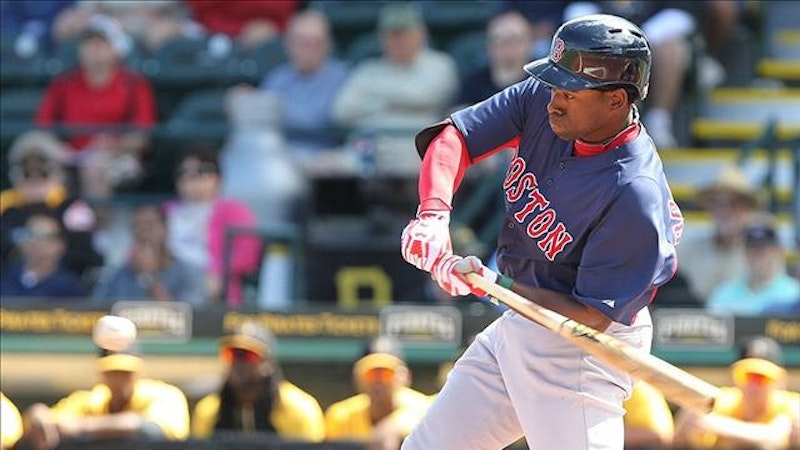 Red Sox prospect Jackie Bradley Jr. is tearing up the Grapefruit League, batting well over .500 and showing scouts just how much promise he has. Does that mean he should begin the season with the club? Absolutely not. The 22-year-old outfielder hasn’t played above Double-A, a level where he’s amassed just 271 plate appearances. Even though he may appear ready for the majors right now, spring training stats are notoriously infamous for not being indicative of regular season performance. Forget the main issue for a moment, his service time clock, Bradley hasn’t even played a game at Triple-A yet. Though the highest minor league level is slowly becoming less significant in player development—evidenced by 2012’s call-ups of Manny Machado, Jurickson Profar and Mike Olt, who all skipped Triple-A—Bradley’s case is different, mainly because he’s spent just one full year in the minors.

If he’s truly ready for the MLB level, which is doubtful, then a month in Triple-A certainly wouldn’t hinder his development. In that scenario, he’d get a chance to mash opposing pitchers, giving him more confidence at the dish, work on his plate discipline, a skill that that is harder to cultivate at the major league level, and perfect his running game, something that, as a not-especially-fast player, he must do in order to effectively steal bases and provide value with his legs.

The primary reason he should start 2013 in the minors, however, is service time. If he starts on opening day, and doesn’t get sent down to the minors for an extended period of time, the Red Sox will only control their future leadoff hitter for six seasons, through 2018. If he’s called up in May, however, the Sox will control him through 2019. Needless to say, that extra year is incredibly valuable, especially since he’ll be in his prime by then. This wouldn’t be as big of a deal if a contract extension was possible. It’s not. Scott Boras, Bradley’s agent, will almost definitely do anything to have his client’s path to free agency remain clear.

This would almost be a non-issue for Boston’s front office had David Ortiz fully recovered from last year’s injury. Scrambling for offense, GM Ben Cherington would be wise to avoid hitting the panic button by assigning Bradley to Triple-A. Ortiz’s injury represents a good opportunity for another young star, one who has received far less press, in Ryan Lavarnway. Ignore Boston sportswriters like Alex Speier, Scott Lauber, and John Tomase—Bradley needs to start the season in the minors.