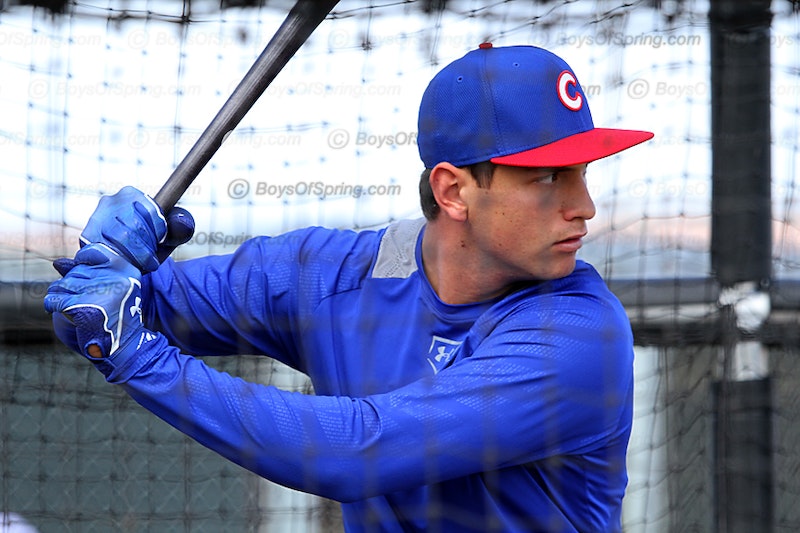 The Chicago Cubs recalled a lot of young talent to the Major League roster last season on their way to the NLCS. The Mets derailed the Cubs’ October plans but Chicago’s talented lineup is set up for an extended run of success. While Kris Bryant, Addison Russell and Kyle Schwarber were displaying their talents to a national audience former first round draft pick Albert Almora was the forgotten man.

Chicago selected Almora with the sixth overall pick in the first round of the 2012 MLB draft. He was billed as a high school center fielder with good on-base skills and superb defensive abilities. Almora was also the first draft pick of the Theo Epstein led front office. Shortly after drafting Almora, the Cubs signed Cuban defector Jorge Soler and pulled off a series of late July trades to swap veterans for prospects. The team’s renaissance had begun and Almora looked like a centerpiece. As the next several seasons played out Almora experienced periods of on-field success and inconsistency, as one would expect of a teenager. He posted a solid 2013 season in the Midwest League but his prospect status hit a bump at Double-A in 2014.

A 20-year-old struggling at Double-A for 36 games certainly wasn’t the end of the world for Almora’s prospect status. However, the meteoric rise of Bryant through Chicago’s system, along with a trade for fellow 2012 first rounder Russell, pushed Almora from the forefront of the Cubs’ growing list of prospects. Almora struggled again at Double-A Tennessee to start the 2015 season while teammate Schwarber hit everything out of the park.

Almora took off in August, posting a .917 OPS and boosting his overall season numbers to a .272 batting average with six home runs and 26 doubles in 106 games. The late-season resurgence has returned Almora to the top of the list of Cubs’ prospects. A number of publications have praised Almora in their preseason prospect rankings, putting him among other Cubs’ talents like Gleyber Torres, Willson Contreras and Ian Happ. The 21-year-old is slated to start the 2016 season as the center fielder for Triple-A Iowa. Almora, who was also invited to Chicago’s Major League Spring Training, could help the Cubs as soon as this season either as a September callup/defensive replacement or as trade bait.

While the Cubs rightfully pushed special talents like Bryant, Russell and Schwarber the team’s patient approach with Almora might’ve paid off. The recent signing of Jason Heyward, who will presumably play center field in Chicago, buys additional development time for Almora. When he’s ready for prime time the Cubs will find a spot for him, either in center field at Wrigley Field or as part of trade to bolster the big league roster.