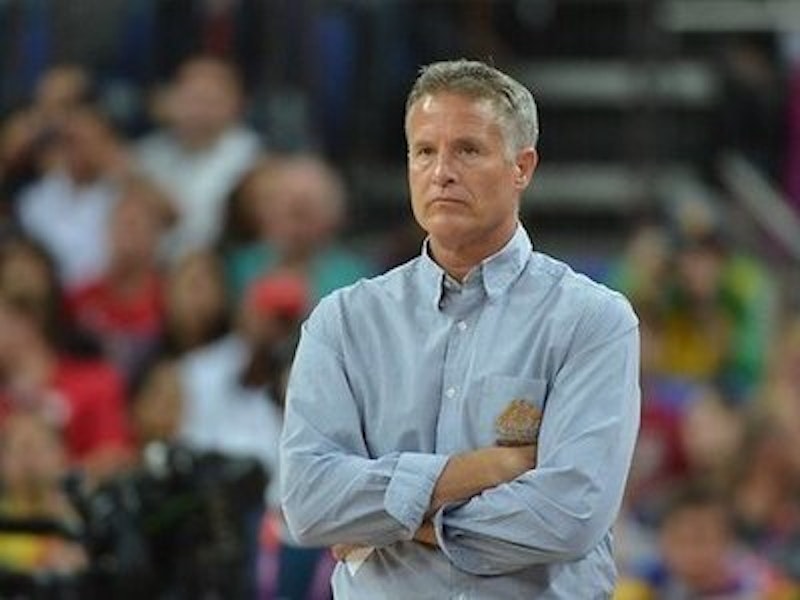 The 76ers have won eight games, which means they can't go 6-76. This is a damn shame. I’ve no idea if Dario Saric will ever cross the pond. I’ve no idea if Joel Embiid's health is improving. I already feel bad for Ben Simmons. Good for Brett Brown, the NBA coach who has absorbed the most suffering in NBA history as a head coach, if you continue to insist the Sixers are an NBA team. Brown’s compiled a record of 45-178, and yet it would be unfair to put any blame on him, when GM Sam Hinkie has set up the Sixers to lose until they collect enough (healthy) top lottery picks to re-invent themselves. Would you blame your dog for chomping on a nicely seasoned Italian meatball that plops onto the floor right in front of his paws? Therefore, you shouldn’t blame Brett Brown for those 178 losses. Gregg Popovich would’ve gone maybe 65-158. Fortunately, Brown is being compensated handsomely for all that suffering, unlike your dog, who is paid in dog food, walks, treats, and belly rubs.

The Lakers recently instituted a new offense. D'Angelo Russell, their point guard of the future, explained the team had "talked a lot about the new offense," and then went out and tried to execute it. I suppose they just figured finding time to scrimmage with these new plans wasn't a big deal. Reality: the Lakers are trying to lose most of their last 25 games so Philly doesn't get their lottery pick (top-3 protected). Brandon Ingram, who might become the top pick himself, will create his own shot. The Lakers desperately need an off-the-bounce scorer on the wing, as well as some sort of attempt at collective defense. All this while Kobe fades into oblivion.

Remember when young GM Ryan McDonough was given lavish praise for the surprising success of the young Suns a couple years ago? Remember when he gave Isaiah Thomas to the Celtics for what will be the 27th or 28th pick (via Cleveland) in this June's draft and the expiring contract of Marcus Thornton. Isaiah's incredibly valuable contract (signed by McDonough). Remember how everyone loves to overreact to everything? Phoenix is currently in semi-accidental, semi-intentional free-fall after a season-ending injury to Bledsoe and a take-as-long-as-you-need injury to Brandon Knight. In need of chemistry, a small-forward, and Alex Len becoming a reliable defensive center, the Suns are projected to take the best wing available. If they pick third, that may be rapidly rising Cal star Jaylen Brown.

The Nets have very little to look forward to these days. Nets fans are like security guards forced to watch monitors of nondescript empty offices during overnight shifts. Somebody has to keep an eye on things, even if that top-5 pick goes to Boston this year, the pick swap gives Boston the better pick in 2017, and that first round pick goes to Boston in 2018. Maybe they'll have signed a free agent point guard and some shooting help to go with that June, 2019 lottery pick. With the fourth pick, the Celtics would love the opportunity to draft 7’1” Croatian power forward Dragan Bender, who they hope will become their version of Knicks rookie Kristaps Porzingis. With a 9’3” standing reach, Bender’s slender frame is nowhere near ready to bang underneath, but his height would make a corner three-pointer unblockable.

The Wolves have a dominant offensive player and surprisingly effective defender in rookie center Karl-Anthony Towns. If the Wolves can land an impact point guard to play alongside the slashing Wiggins, the uber-athletic LaVine, and the quickly-developing Towns, they'd be very happy heading into October. Though Ricky Rubio’s defense is underrated and his passing is head-shaking, his lack of shooting (32.6 percent on all jumpers, 29.7 percent on threes) and inability to finish at the rim continue to limit his ceiling. Tayshaun Prince, 36, is averaging 20.8 minutes per game, which is about 17 minutes per game too many. Prince is still a helpful defender, but has no place among the future Wolves, and Minnesota needs to give Shabazz Muhammad the chance to learn respectable NBA-wing defense. Kris Dunn of Providence is the projected fifth pick. If they can’t get Dunn, the Wolves need to draft a rangy shooting guard, Kentucky’s Jamal Murray would work, complementing Wiggins’ slashes to the rim.

Danilo Gallinari's sprained ankle will ensure that the Nuggets slip down into the presumptive sixth slot in the draft. Emmanuel Mudiay’s rookie year has been mostly awful, worse than even the least hopeful draft pundits predicted. At least Mudiay has found some tenuous footing in February against weak competition. The Nuggets would love to land Kris Dunn to build around. Remember when Kenneth Faried was on everyone's mind? Mike Malone is going to need to find one his local cannabis stores to survive the last two months of this year.

The Knicks have dropped 13 of their last 16 games after a promising start. Derek Fisher never seemed to show the flexibility or humility to be a good modern coach. It makes sense that they moved on. Who will be at the helm in October? Probably not Phil himself, although that'd be intriguing. Toronto gets New York's pick, so Phil will have to leverage the allure of NYC this summer in free-agency. The Knicks need help everywhere to support Porzingis and Melo.

The Kings badly wanted to make the playoffs so they could persuade their sorrowful fans that the future contains a trickle of sunlight. After a five-game winning streak in mid-January, Sacramento climbed to within a few games of .500. The road trip that ensued brought bleak reality back into focus, as the Kings dropped eight of nine and Rudy Gay missed games with assorted injuries. Instead of playoff dreams, the Kings find themselves four games out of the eighth spot in the Western Conference, with a 24-33 record, staring down the business end of another lost season. Buddy Hield, one of the rare NCAA seniors in a major conference to put up big numbers (25.4 ppg) can’t hurt provide the Kings with a better scoring guard than Ben McLemore.

Scott Skiles is praised for building defenses but only occasionally criticized for not building collective culture. The Magic started 19-13, feasting on a weak schedule and taking opponents by surprise with their newfound defensive intensity. Casual Magic fans got ahead of themselves and thought about the playoffs. Since then, they've collapsed like an IKEA table put together by two seven-year-olds, losing 19 of their last 26. The Magic need to sign a versatile power forward or fast-forward to 2018, when Aaron Gordon may start to resemble Shawn Marion. A scoring point guard would help, unless Elfrid Payton goes jump-shot-reconstruction surgery in the offseason. Demetrius Jackson of Notre Dame is the early projection at number 11.