Losing Is a Disease

Marist tries to rise up from basketball skid row. 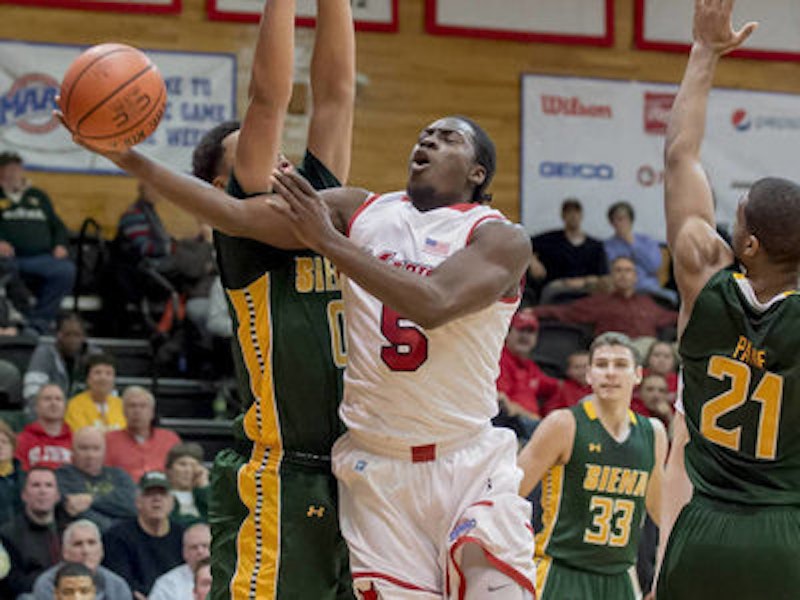 On Super Bowl Sunday a glance at the NCAA Division I basketball stats showed at least six teams that were oh-for-2016. Winless since that distant December of 2015, back when David Bowie was still alive.

The University of Delaware Blue Hens currently leads the way into the abyss with 15 straight losses. After Delaware comes St. Johns in Queens with 14 straight negative entries in the ledger, followed by the toothless Cougars of Chicago State with 13 consecutive losses. From the Big 10, the Golden Gophers out there in Minnesota have 12 straight Lutheran failures while the Scarlet Knights (of Embarrassment) at Rutgers have dropped 11 ballgames in a row. Just to cross-reference all the hardwood frustration—Minnesota’s last win was against Chicago State, and Delaware’s last victory came at Marist College in Poughkeepsie. With the Red Foxes harboring their own 11-game losing streak, I decided to venture into McCann Arena for what surely would be a pre-Valentine’s Day massacre. The Siena Saints were venturing down from Loudonville, NY, with their 15 wins to face lowly Marist. The sun was out, the thermometer said 56, and the baseball team was scrimmaging. It was fittingly a terrible day to be inside.

As a chronicler of loss, however, I felt compelled to watch the Marist-Siena matinee on Super Bowl Sunday in Poughkeepsie. The storyline was to be the Red Foxes making it 12 defeats in a row, with 13 staring at them in the form of MAAC powerhouse Monmouth scheduled to arrive in town on Tuesday.

The last time Marist won a basketball game was at the Mohegan Sun Arena in Uncasville, CT as part of the “Basketball Hall of Fame Shootout” four-team tournament where they beat Ivy Leaguers Brown University in double overtime on December 22, 2015. Also at that tourney was St. Johns who would lose to the South Carolina Gamecocks as the third defeat in their current run of despair. Marist would quickly learn a casino win is a hollow victory, and the Red Foxes run of play through the new year would have had Dr. Naismith being whistled for traveling as he spins in his grave.

I figured I should also attend the Marist vs. Siena game to honor Siena, which was the final employer of a creative writing professor I had back in the early-1980s at Ohio University. I recently found out he died on December 27 and I remember Naton Leslie well as a grad student instructor in Athens, Ohio, handing out a cool first assignment for creative writing 101 which was to translate a passage of Anthony Burgess’ “droogie” slanguage from A Clockwork Orange into “regular” English. Leslie was jaded and cynical as a Warren, Ohio native should be and looked like a junkie but he was one of many inspiring English and Journalism professors I’d meet at the state school and I actually followed his poetry career until his obit popped up in a recent internet search. He was 57 and had a wife and kids and had won some prizes and grants recently so this ultimate defeat by the Grim Reaper was kind of surprising.

So of course I was a malenky bit poogly when I viddied the Red Foxes snapping their 11-game losing streak right in front of me with a workmanlike 79-73 win over visiting Siena. Marist threw a monkey wrench into my plans to enhance my skills as a defeat wallower, just as the nearby Westchester Knicks have with their surprising winning ways this season. I seek athletic suffering much like the Silver Surfer’s eternal quest to supply Galactus with fresh planets to consume.

Even the most bored kid in McCann Arena put down his comic book long enough to notice the post-game adrenalin pumping up the boys in white and red. Especially jubilant after the win was the freshman guard from Denmark named David Knudsen. When he and fellow freshman Kristinn Palsson from Reykanesbear, Iceland, are on the floor together, Marist has a certain Viking confidence oozing forth. Also quite confident is their gum-chewing teammate Isaiah Lamb, another tall freshman out of Baltimore’s Dulaney High School. Palsson’s three-pointer in the closing seconds sealed the deal for Marist. The win over Siena also seemed to lift a tiny weight from the shoulders of a constipated crowd made up mostly of state Department of Corrections personnel and their spouses. Up close the Siena players looked dog-tired with the game very close with one minute remaining. Both teams bit the shot clocks down to the quick and there were no dominating players in the paint or on the perimeter. The Saints did not look like a third-place team in the MAAC, nor did Marist resemble the 2-11 cellar dwellers they were coming into this contest.

Attending groggy Sunday basketball in mid-February again reminds a fan that the game comes down to excursions into controlled cheating. How much can you get away with when the warden turns his back? Second year Marist coach Mike Maker was on the brink of a technical foul all afternoon as he was riding the referees with demands that they call “charging.” The refs were sheepish, resembling off-duty barbers, perhaps not noticing the creepy vacant look sported by Siena’s junior forward Brett Bisping from Peoria, IL. Maybe they didn’t notice or care about the geriatric Siena road support, or perhaps they really do enjoy the time-out floor entertainment done by the Marist Dance Team apparently inspired by irony-free screenings of Napoleon Dynamite? Ditto their ignorance of the alumni dads dotting the stands barely looking up from their texting to ex-girlfriends as the formality of basketball time-outs unfold in front of them. Event planners have taken over college basketball and apparently coaches cannot address their players on the straight line of the bench. No, they need an artfully placed semi-circle of tiny hunter’s chairs each with a sports towel and plastic beverage bottle arranged just so by stoop-shouldered sports medicine toadies. The bench players actually must discontinue their nose-picking to get up and stand behind the starters who get the seats on the floor as the coach moves in with some new strategy on a gibberish whiteboard. The confab is then broken up by one of the refs, the pep band shuts down its Radiohead cover and the hovering toadies remove the tiny chairs and retreat to the cramped sideline. Another basketball conclusion: what seems like a very basic game now has its own micro-complications.

With the Super Bowl over and done with and early March putting most of these bad NCAA division I teams out of their respective miseries, baseball is on its way and not a moment too soon.