However, the Hershey Bears make for a swell family outing. 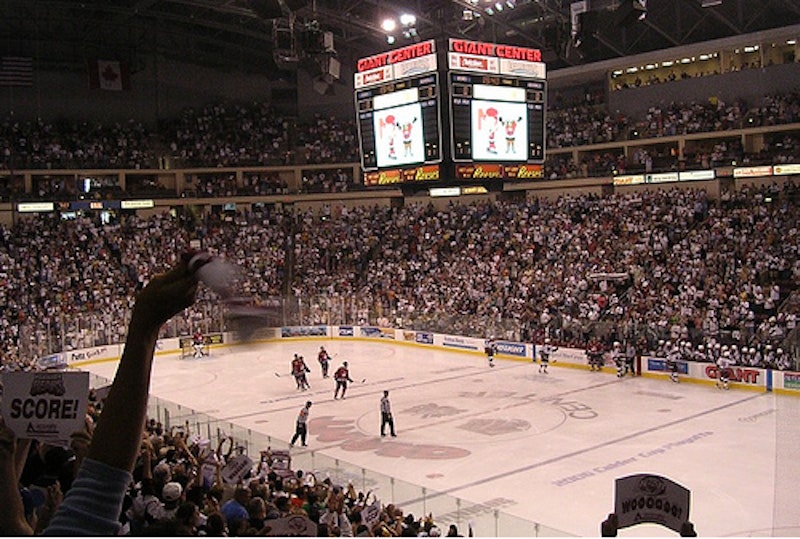 I’ve never been much of a hockey fan. As a kid growing up in Baltimore in the 1980s hockey wasn’t a consideration. There are fond memories of my dad taking me to a SkipJacks game when I was about 10, but I never developed a love of hockey like baseball, football and basketball. Hockey was for Canadians.

Now as a resident of Southern Pennsylvania, and a short drive from Hershey, we’ve developed a family tradition of going to a Hershey Bears game each winter. The Bears play in the American Hockey League and serve as a minor league affiliate of the Washington Capitals. I’m completely apathetic towards the Caps, as any good Baltimore sports fan should be, but I do like the Bears.

A trip to a Hershey Bears game is a terrific family value. They do play some good hockey, or so I’m told, but the family friendly atmosphere at Hershey’s Giant Center is top notch. I don’t know an icing penalty from interference but I do know a clean venue, friendly staff and entertainment value. The Hershey Bears deliver on all fronts, plus they always seem to win when we’re in attendance.

Our family of four went to Hershey last Sunday afternoon to watch the Bears take on some team called the Senators, or Admirals. It doesn’t really matter. Sunday’s game featured the best promotion of the season, the driving force behind our ticket purchase, free HersheyPark vouchers. We bought the tickets as a sort of double-whammy stocking stuffer for my son. The kids were very excited because they knew they’d get junk food and an eventual trip to HersheyPark.

I bought the tickets after the season had already started so instead of getting four seats together I had to settle for two pairs of seats in separate sections. My son wanted to sit high up in the stands so he took the 200 level tickets and his Mom’s hand while my daughter and I headed for section 121. My wife overheard a man trying to unload his second row seats so he could get home to prep for a Super Bowl party. My wife grabbed the tickets and detoured to the second row of section 104. We now had a total of six seats in three sections for four people.

My daughter and I took our seats in a section of diehards. The Hershey crowds are usually great with a lot of kids in the stands and nary an unkind word. The elderly man in front of us was perfectly cordial with his friends and neighbors but he continually turned around to look at my daughter. I’m not sure if he was put off by her beginner questions, and my Hockey for Dummies style answers, or if his plans to get out of the house and drop a few profanities had been spoiled. After the first period we headed down to the second row seats my wife and son had previously occupied.

The second row was a different world. My daughter immediately complained about the cold as she zipped up her winter coat. It’s nice being close to the action as long as it’s on your half of the ice. For long stretches the puck was at the other end and my daughter lost all interest. At one point a fight broke out on the ice, much to the delight of the crowd. As fans banged on the glass my daughter clung to my neck and asked what they were fighting for. I did my best to explain but she couldn’t understand why such a minor infraction resulted in fisticuffs. She thought both players should go on time out and not get to play anymore. She was probably right.

After the second period, my wife texted me to meet up because our son was ready to leave. We made our way to section 210 only to discover that my son’s “stomach ache” was actually a thinly veiled attempt to go home and watch Pokemon on Netflix. His new obsession with Pokemon is about two weeks old. That’s when his best friend visited during a snow day along with his binder full of Pokemon cards. Our little guy has been hooked ever since. When we told him we weren’t spending money on Pokemon cards he set out to create his own. He’s spent much of his free time over the past two weeks creating makeshift Pokemon cards out of sticky notes.

We took our seats for the start of the third period. The Bears tacked on a few quick goals to make the game a laugher. We joined the parade of fans streaming towards the parking lot. We’d had another fun family day thanks to the Hershey Bears. We left with a pocketful of HersheyPark passes and the promise of warmer days. The Bears won and scored six goals, we saw two zambonis and a fight, plus a broken stick flew into the stands where it was snagged by a heads-up fan.