The Five Knicks I'm Most Excited to Watch

Hanging onto hope this season. 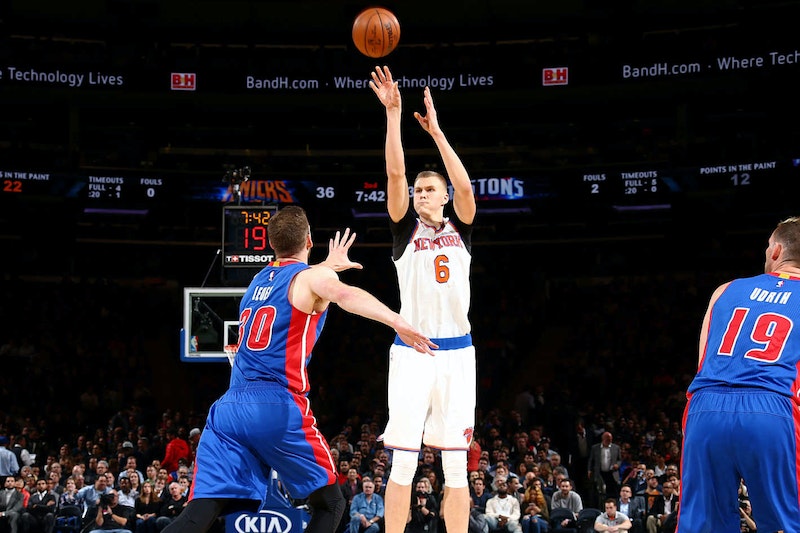 The state of the New York Knicks is... good? Long-suffering fans—who’ve endured the entirety of James Dolan's ownership tenure—seem cautiously optimistic. The squad has a promising young core and marquee free agents are rumored to be on the way. Hell, even Kristaps Porzingis' ACL injury might have a silver lining, offering the club one final lottery pick before getting competitive. Given this sense of hope, I've ranked the five players I'm most excited to watch this season.

5. Trey Burke—The Knicks may have found a winner when they signed this 25-year-old from their G-League affiliate. Some of his recent statistics are so impressive, I have to remind myself they're based on a small sample size. Most analysts seem to think his performance will drop off, but what if it doesn't? Here's hoping we'll see more of the Burke who scored 42 points on the Charlotte Hornets.

4. Mitchell Robinson—Somehow the Knicks managed to get one of the top recruits out of high school in the second round of the draft. It's a complicated story. Basically, he didn't play in college and as a result his stock fell drastically. It's too bad for Robinson, but great for the team. The 20-year-old was a monster in Summer League. And did you see the training video of him dunking off one dribble from the opposing three-point line?

3. Frank Ntilikina—I have a soft spot for the French Prince, as his first season with the team was my first as a fan. But I think his ranking on this list is justified. The 20-year-old is still younger than many of the new players entering the league this year. He has potential. While Ntilikina has been too timid on the offensive side of the floor, his defense is elite. Ideally, with a new coach and offseason development, he’ll improve his scoring ability and become the player New York needs.

2. Kevin Knox—The 19-year-old has sounded amazingly confident talking to the media. Among other things, he's made clear that he's gunning for the Rookie of the Year Award and believes the Knicks could make the playoffs this season. His performance in Summer League suggested the first goal wasn't idle bluster, and considering the weakness of the Eastern Conference, the second might be achievable as well, even if it's somewhat counterproductive in the long term.

1. Kristaps Porzingis—So much depends on the knee of a 23-year-old Latvian. If the Unicorn returns, but doesn't look like the All-Star he was last season, New York will be a significantly less attractive destination to free agents. Porzingis shouldn't rush his recovery. In fact, staying out longer could boost the team's lottery odds, as previously mentioned. But how he comes back is incredibly important to the Knicks' future.