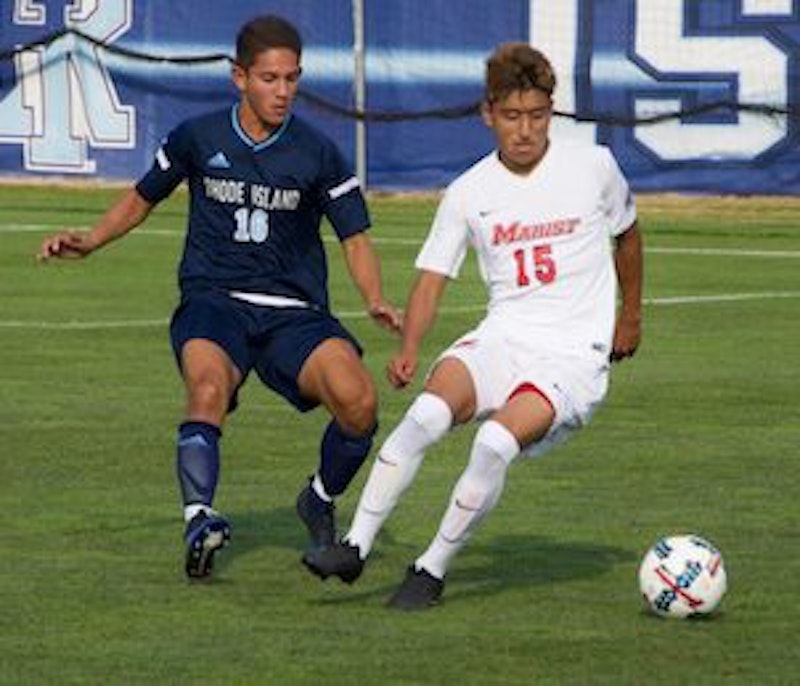 The idea was to end summer with a non-baseball outing, and the goods were delivered on a cool Saturday night in Poughkeepsie.

It was there the Marist Red Foxes men’s soccer team, with one win and three losses prior to oncoming MAAC conference play, were hosting the red-hot University of Rhode Island Rams of the Atlantic 10 conference. URI had yet to concede a single goal thus far, winning its first four non-conference games of the season going away against the likes of Holy Cross, Bryant, Boston University and Penn State. URI wasted no time dispatching Marist 2-0 in front of a decent crowd (573) at the lopsided Tenney Stadium along Route 9 (also known as Broadway in Manhattan).

There were plenty of comfy seats in the wedge of a stand facing the Hudson River, and the first fall-like night chill had set in on the mid-Hudson Valley. Coats were reintroduced to wardrobes quite suddenly as 48 hours prior had seen steaming humidity. The student body was still underdressed, of course, and they seemed to find their voice as the game wore on, even deploying a phalanx of hecklers who singled out a Norwegian-born defender for URI for much of the game.

Instead of taking a seat in the stands with the punters, I decided to take advantage of a low open concourse running behind both benches. I could lean against a stone wall and take notes and not block anyone’s view or access. This way the “sounds of the game” were readily available. An attentive ear can catch the chatter of soccer players voiced as a lingua franca shared Buddy Hackett-style, in passing, between heaving breaths. They are on the go, exhausted but still quite fit. They pretend not to hear the goalkeeper’s deputized on-field authority amplified by the papery woofer cones that are his oversized Mickey Mouse gloves forming a makeshift horn around his mouth. Then there are the coach’s barked instructions that many times arrive as back-alley versions of heroic couplet. Add to this the endless piss-ant line of substitute players chatting away as they do their sideline warm-up jitterbugs wearing bright vests. The whole thing is, in the words of my English relatives who hate sports, “Rather noisy.”

This was Marist’s home opener. They’d lost at Albany, went out west and split a pair (loss at Saint Mary’s and win over Pacific) before hosting the lads from Kingston, RI. It’s the school that gave us Christiane Amanpour and is one of two “Rams” in the Atlantic 10, with Fordham being the other. Just up the road and across the river from Poughkeepsie is another Kingston, home of the NPSL Kingston Stockade FC, that’s summer stock theater for several of the Marist soccer players. There are more than a few Stockade FC diehard fans who attend Marist games just to keep an eye on the guys they know from the Frankenstein embrace of Dietz Stadium in Ulster County. (Full disclosure: I publish a fanzine for Kingston Stockade supporters and also do live YouTube color commentary for Stockade FC home games. In addition, I loathe the color red for sports teams, which includes the alarming Pantone 185 coral red of Marist College athletic squads.)

Marist and its army of sports marketing majors always do a fine job with game day programs. A glance at the URI and Marist rosters for this fall showed an international imbalance in favor of the Rams. Of the 26 listed student-athletes for URI, 12 were from foreign nations. There are five Norwegians wearing URI colors, three Germans, two Austrians, a Czech and a dude from Bermuda. The URI coach is a native of Belfast, just to complete the United Nations angle. For Marist, five of 27 rostered players were from outside U.S. borders. There’s a Swede, a Bolivian, a Canadian, a Brazilian and a senior defending midfielder from Denmark.

URI maintained a fast-paced horizontal ball control and scored a goal in each half. The first was by Stavros Zarokostas, a hard-working attacking midfielder from Coventry, RI. The second half goal was a sweet rebound retrieval by senior Chae Brangman, the aforementioned Bermuda native and transfer from Southern Connecticut State.

Freshman keeper Roger Penske (Newport Coast, Calif.) recorded his fourth clean sheet of the season for Rhode Island, while Marist keeper Ryan Sinnott, a junior from Commack, NY, was a bit nervous from the onset. A few coeds in the front row, fellow jocks, said it was a big game for Sinnott because he had committed to URI before snubbing the program to come to Marist.

Midway through the second half, URI suffered a goalmouth embarrassment. With Sinnott beaten on a low collision at the edge of the penalty area, the loose ball trickled ominously toward the gaping Red Fox goal. Trailing it and catching up was URI’s number 10, Dominic Richter, a senior from Nuemarkt, Germany sporting a man bun. He attempted to roof the ball already bound for the back of the net and instead blasted it upward and off the crossbar, deflecting back into play to be cleared by astonished Marist defenders.

“What just happened?” asked the URI warm-up dudes in front of me. An assistant coach offered a basketball metaphor to the air above his silent bench. “That is like trying to slam dunk instead of taking the easy lay-up and blowing it,” he said under a too-white ball cap.

Richter was immediately subbed out by head coach Gareth Elliott, a one-season player for the Ards Football Club of the Northern Irish Football League Premiership. Elliott’s familiar with Poughkeepsie, having coached the Marist rival Siena Saints for several seasons before taking his talents to Rhode Island. As Richter was taunted by Marist students for his blunder, he applauded over his head directly at the red-attired horde and pointed to the scoreboard with a grin. Elliott had to cool off his German midfielder and took a seat next to him on the bench.

This was after Marist keeper Sinnott told his defenders “no more funny stuff” as the second half began. Kingston Stockade fans were glad to see defender Bruce Jeter, a senior for Marist who’ssaid to be a distant cousin of Miami Marlins CEO Derek Jeter, taking charge of a second half surge by the Red Foxes. With no stoppage time in NCAA soccer, the clock worked against the home side. As Jeter stood over a free kick at midfield during a choppy, ref-heavy second half, his mates implored him from a scramble in the URI penalty area. “Serve the shit out of it Bruce!” one of his forwards screamed. URI defenders seemed baffled by the choppy, short corner kicks favored by Marist pleading with the ref and coach Elliott while dangerously taking their eyes off the ball. A language barrier was crossed after URI cleared yet another Jeter cross into the box. “I was not talking to you!” screamed one heavily-accented player to his opposition. The Marist Bolivian Juan Parada, who was dangerously good for Kingston this past summer, got his second yellow card after a midfield scuffle and was sent off. A URI player rushed to his bench for emergency water to “get this shit off my back” insinuating that Parada or possibly another Marist player had spit on him.

Another shutout in the books, the URI Rams were set to continue a road stint through the nearby Litchfield Hills to play UConn (3-2 undefeated at home) on Sept. 11, visit the Providence Friars (2-2-1) on Sept. 18, host Brown (2-1) on Sept. 22 and then begin Atlantic 10 conference play with a home game against mighty Fordham, the OTHER Rams in the conference who have hovered around the top 10 ranked NCAA Div. 1 programs according to United Soccer Coaches official tally.

Fordham has two wins and an unlikely draw against lowly Bryant and were scheduled to visit Marist on Sept. 12. The preseason pundits liked Fordham’s chances to win the A-10 conference thanks to players such as senior Janos Loebe, a midfielder out of Kierspe, Germany and senior goalkeeper Rashid Nuhu who hails from Accra, Ghana.

The same pundits also noted URI had an outside shot at contending this season. If URI coach Elliott has the luck of the Irish still with him, look and listen for the clash of Rams’ horns this fall on top of the Atlantic 10 Conference soccer mountain.