NHL Mediocrity Worse Than Being Bad

How did this happen? 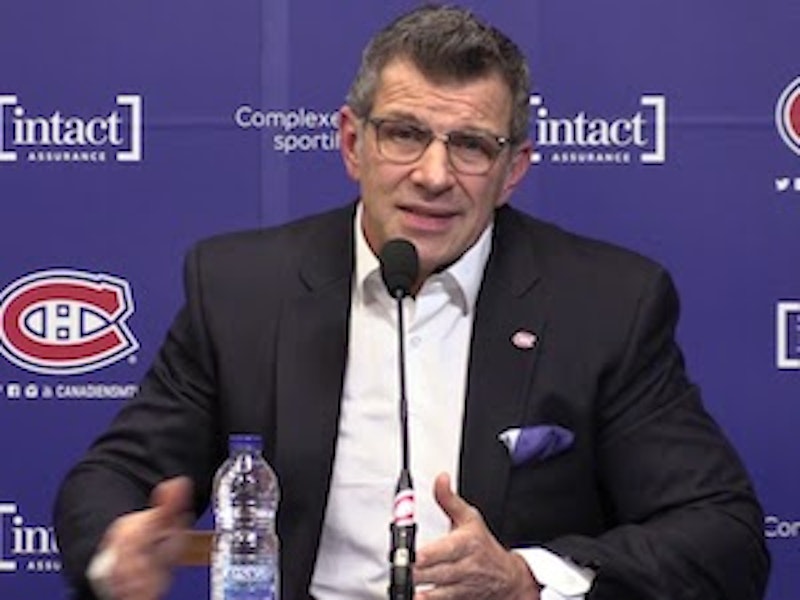 And so it’s come to this: as a fan of the Montreal Canadiens, I have to hope that the team’s going to be bad. Not just for a stretch of games after getting eliminated from playoff contention, not even for a whole season, but for two years. Maybe even more.

How did this happen?

Some of it has to do with the National Hockey League’s draft system. But mainly it’s the Canadiens having both a poor general manager and a solid amateur scouting system. It makes for an odd exercise in delayed potential gratification.

Let’s skip back to when Marc Bergevin was hired as GM of the Canadiens in 2012. He inherited a team that finished 27thin the NHL the year before, almost entirely due to bad coaching and haphazard management from his predecessor. In fact, he had the core of an excellent team. Carey Price was rounding into shape as perhaps the best goaltender in the world. Andrei Markov was a veteran top-10-in-the-NHL left defenseman. P.K. Subban was a phenomenally talented right defenseman. Max Pacioretty had scored 30 goals. Tomas Plekanec was a useful center, Lars Eller a solid third-line two-way center who could play on the second line. All Bergevin had to do, really, was add a true top-line center to his depth chart, and he had the core of a legitimate contender. Luckily, he had a third-overall pick to work with to do that. Late in June, he picked Alex Galchenyuk, a big and talented centerman.

Of course, he also had to hire a new coach. And here the problems began. The best available coach with NHL experience was Michel Therrien, who was mediocre; Bergevin hired him, and then stuck with him, even when the results weren’t there. A first-round loss to Ottawa in the 2013 playoffs prompted faulty self-criticism—eliminated by spectacular goaltending from the Sens, Bergevin evidently thought the team needed to get bigger, a retrograde philosophy that fit with Therrien’s coaching style. Various draft picks were wasted in pursuit of this goal, bad trades were made—and Therrien couldn’t develop Galchenyuk as a center, insisting on playing him at wing, leaving the Canadiens with an aging Plekanec as their best option at arguably the second-most important position in the sport.

That third-overall pick was the key to Bergevin getting a center to fill out his core. Bergevin had to either use it to draft a center, trade it for a center, or draft someone he could trade for a center. He didn’t do any of that. Bergevin did manage to add Jeff Petry, a talented defender, to his core. But lacking a true first-line center he soon began to trade away that core, whether because he’d misidentified them as the problem or because they couldn’t get along with Therrien, who Bergevin insisted on sticking with. Subban went for an older, lesser, but more physical player in Shea Weber. Lars Eller (along with a step down in draft positions) went for Andrew Shaw, who was immediately given a large contract and promptly suffered a series of injuries. Markov got older, and last year Bergevin didn’t sign him despite his having been solid the year before.

Eventually Bergevin fired Therrien, replacing him with Claude Julien, but too late: Pacioretty, the team captain, has been traded away for a young center. Galchenyuk went before him, sent to Phoenix for a complementary winger. Only Price, and a Plekanec nearing the end of his career, remain.

The core that showed such promise six years ago is dismantled. Bergevin’s done a terrible job replacing them. After drafting a promising defenseman named Mikhail Sergachev, he traded him to Tampa Bay for winger Jonathan Drouin, then asked Drouin to serve as a number-one center. That didn’t work.

The line-up isn’t lacking talent. But it’s all in the wrong places, all at wing, none at center, little on the left side of the defense—there’s nobody to play alongside Weber. It’s true that in the NHL today bad teams can turn around in one off-season. But not ones so out-of-whack as the Canadiens. They need two top-six centers, and a top-pair left defenseman; ideally another top-four left defenseman beyond that. Weber and Petry make the right side solid, there’s a plethora of talented wingers, and besides Price the Canadiens have a number of goaltenders in their system. But the holes are deep, and I don’t see how they can fill them in the near future. The longer term’s more interesting, though.

More than a year ago, the Canadiens drafted a young center named Ryan Poehling. He looks like he has a legitimate chance to turn into a second-line center in the NHL. And at this year’s draft more than a month ago, the Canadiens selected a lot of centers, starting at, once again, third overall with a young Finn named Jesperi Kotkaniemi. He should be at least a second-liner, and maybe a first-liner. Between him and the others drafted by the Canadiens, their issue down the middle of the ice should be mostly if not entirely solved. Eventually.

But Poehling’s going back for another season in the NCAA. Kotkaniemi, one of the youngest players in his draft year, needs more seasoning before making the NHL full-time. And Nick Suzuki, the promising young center the Canadiens got for Pacioretty, probably should spend another year growing in junior hockey. So the kids aren’t going to bail out the Canadiens this year—and even when they do make the team, you can’t expect them to jump in and be top-six players right away. There’s at least one more year, probably two, before the Canadiens are going to be any good.

Which might be just as well. Besides the fact that there’s no guarantee Kotkaniemi will develop into a superstar, the Canadiens don’t have any really top-flight prospects at defense. Some very nice young players, definitely. But none that seem certain to become a top-pairing defender who can play 25 or 30 minutes against the best talent in the league. They need to be bad, I think, pick some defensemen in next year’s draft, and then wait for them to develop. The year after that, 2019-2020, Poehling should break into the League, but why rush Kotkaniemi? Let the young defensemen develop, and make another high pick.

Then the year after that, Poehling will have a year of experience, Kotkaniemi should be able to make the jump to the NHL, maybe some of the prospect defenders will be ready. And there’ll be another high pick, as well. The Canadiens expect Carey Price and Shea Weber will still be capable of playing at a high level into their late-30s, so they should still be around to mentor the young players. I hope the Habs will then be ready to challenge for in 2021.

That’s probably the best-case scenario. The worst-case scenario involves Bergevin making more bad trades to try to rebuild on the fly. Or forcing young players onto the Canadiens’ roster before they’re ready. Or adding older free agents who lift the Canadiens to mediocrity, depriving them of high draft picks without giving them a realistic shot at a Stanley Cup. Mediocrity, in the NHL as it now is, is worse than being bad.

So long as Bergevin does nothing, in other words, I’m happy.