The Milwaukee Brewers Are the NL’s Most Intriguing Postseason Team

Is a surprise in the offing? 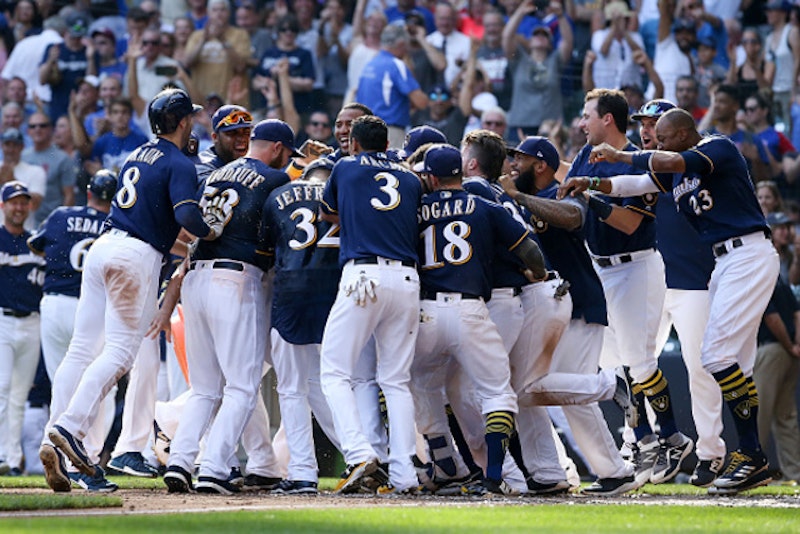 When it comes to the National League, I’m a mostly neutral observer. I was born in Greater Boston in 1980. This means I was raised around the irrational exuberance, religious devotion, and gloom of Red Sox Nation, despite the fact that neither of my parents were born Red Sox fans. I moved to the Bay Area in 2003, so I’ve mostly enjoyed my Red Sox from the visitor’s side of the infield and bullpen in Oakland.

I developed a liking for the San Francisco Giants around 2007 and 2008, when a 5’10” acrobat named Tim Lincecum began taking the mound in the picturesque park on the Bay. Before they became the team that couldn't lose in October, winning rings in 2010, 2012, and 2014. Those earlier Giants teams were creating a new, fun-loving identity after the Bonds era. It was impossible not to enjoy watching Lincecum pitch, and equally difficult not to lose it when young Pablo Sandoval continually came up with clutch hits. That was a decade ago.

Which NL team excites me today? The Milwaukee Brewers, a team you should definitely enjoy watching this October. Milwaukee’s a mostly forgotten Midwestern city. Madison is Wisconsin’s relatively hip college town. Green Bay is a tiny mecca made entirely of bratwurst and cheddar. The residents also enjoy football. Milwaukee’s not exactly a big market, but with rabid, beer-loving folks who love their Brew Crew. The Brewers were supposed to be a .500 team, according to Vegas. They were pegged for 83.5 wins, which made them the perfect “over” pick. Milwaukee added two of the better hitters available last winter. Christian Yelich came via trade during Miami’s fire sale, while Lorenzo Cain signed a five-year/$80 million deal.

Yelich played his first four full seasons in Miami, which happens to be one of MLB’s worst parks for hitters. He turns 27 in two months. For about a decade now, baseball analysts have been enamored with the age 27 season as the likeliest year for hitters to break out. It seems that the combination of experience and natural body development leads to added power. Yelich currently leads the NL with a .973 OPS, while smacking a career-best 33 HRs, while maintaining a .321 average and solid walk rates. Yelich’s sparkling second half has garnered MVP attention.

Cain was originally drafted by Milwaukee out of high school in 2004. He gradually worked his way up through the minors. The speed and defense were always there, but his power was inconsistent. He struck out often but didn’t lift the ball much. Remember when speedy guys were taught to hit every ball on the ground? This repertoire kept him from topping prospect lists. Still, he was intriguing enough to be included in a multi-prospect deal that netted the Brewers Zack Greinke in 2010. Cain was kept in the high minors, seeing spot duty in Kansas City in 2012 and 2013. He didn’t see a full season in the majors until 2014. Why does this matter? It’s exceedingly rare for a player to finish third in the AL’s MVP voting (2015) in his second full major-league season. Cain starred in Kansas City’s 2014 October run, taking the ALCS MVP, pushing the Royals over the Orioles, and playing a major role in 2015, when KC won the title. Cain arrived in Milwaukee with a reputation as a great center-fielder, and an increasingly patient, top-of-the-order batter. What better way to set the table than with speed and patience? At 30, Cain has shown no signs of slowing down. Cain has improved every season as his career has progressed and opportunities increased.

At Baseball-Reference, Cain currently leads the NL, among non-pitchers, with 7.0 WAR. Yelich is second, with 6.6. WAR appreciates Cain’s defense, claiming he’s been the second best defensive player in the National League, behind only Arizona shortstop Nick Ahmed.

Milwaukee’s more than just Yelich and Cain. Their lineup includes the lovable, Sandoval-esque Jesus Aguilar, whose opportunity to shine in the majors has also arrived late (age 28) after leading AAA in homers last year with 40. Former Red Sox Travis Shaw, another hitter who showed promise in the minors, but was limited by his home field (Fenway is tough on left-handed power) became a Brewer and started launching homers. After connecting on 31 last year, he’s at 31 and counting this year. Shaw’s defense is questionable at second base, where he moved after the club acquired Mike Moustakas at the deadline.

The bullpen is the heart of this team. Lefty Josh Hader set a strikeout record for relievers (138 in 78 innings), while Jeremy Jeffress has developed nasty movement on all of his four pitches, resulting in a measly 12 extra base-hits allowed against 289 batters faced. That’s a .277 slugging percentage allowed. Meanwhile, closer Corey Knebel is back to striking out everyone he faces.

After heating up in August and September, the Brewers find themselves embroiled in a tightening race with the Chicago Cubs in the NL Central. Milwaukee has cut the Cubs lead to half a game as we head into the season’s final weekend. The Brewers finish the year with a series against the lowly Tigers, while the Cubs must face a Cardinals team clinging to their playoff lives, half a game behind the Colorado Rockies. A potential tie-breaker game would take place at Wrigley on Monday. The winner would have home field throughout the National League side of the postseason bracket. The loser would end up in a one-game playoff the next day.