Not Enough of the Right Stuff 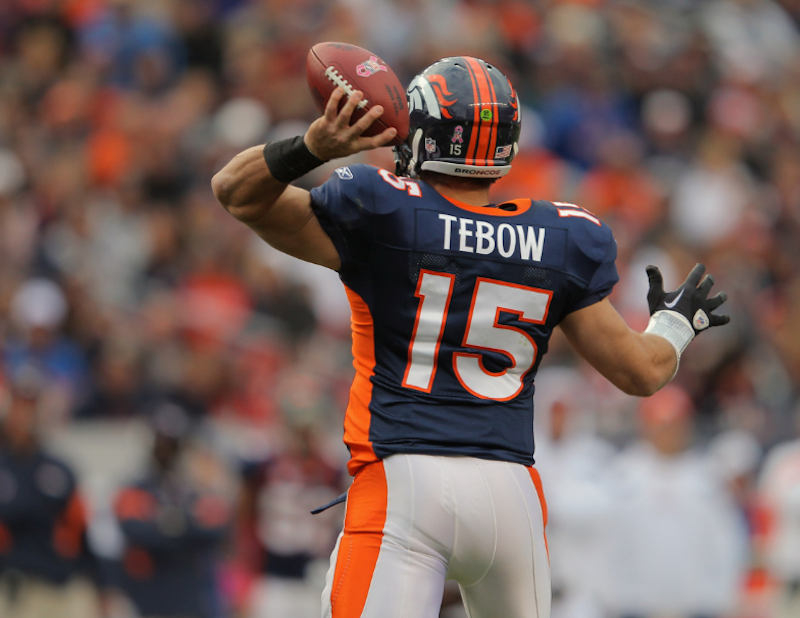 “When I was young, I felt the tide of aspirations undefiled. But manhood’s years have wronged the pride my parents centered in their child.”—Stephen Foster

Alright, alright, alright. That was then and this is now. Now is when you, Tim Tebow, come to realize that the people no longer love you for you—by which I mean the decision makers, the money men, the people who truly matter in this sorry world of ours. Your dream was to play in the NFL, the Big Time so to speak, because that’s what you were meant to do. Destiny, am I right?

But now it’s done. A final cut, the unkindest cut. You’ve prepared, though: you’ve performed circumcisions as part of your father’s ministry, or so the public record says. Cut after cut. Where did all that holy prepuce go?

You had some abilities; I had some abilities. Yours were worth more than mine, of course, because everybody loves a baller and far fewer people care about a recaller. We both have backup plans, except, again, yours are worth more than mine. You can play minor league baseball and deliver the sports news and I can play video games and deliver the mail. In both cases we’ll be able to maintain excellent tans.

Maybe you or I will make a comeback. The fans love a comeback. Your whole career was a comeback—you even had to come back from winning the Heisman. It was all downhill from when, Tim Tebow? I’m fascinated by that: when is the precise moment at which you understand that that’s it, stick a fork in me, game over, man? I suppose it’s when you can look and see the whole field, except every receiver is covered and the pass rush is bearing down on you. You could break for the sidelines—you have good speed, not necessarily game-changing but surely sufficient, 4.6 speed—or you could hold onto the ball and brace for impact. You fumbled a lot, because you always opted for the former; others had to tell you when to quit.

I always knew when to quit. Nothing’s easier to write than an “in memoriam” for a fallen friend, some empty eulogy filled to the brim with humbug and bullshit. You just type, type away, writing “No man is happy until the end is known” and 10,000 other clichés, all of which are true because they’re too insipid to warrant falsification. Tim Tebow, you’re a name that was, not a name that is, and your time is going, going, gone, even if your name still crops up now and then. Whereas I came and went, hurting no one and helping myself as much as I could, for all the good it did me, for all the good it does anyone.

The funny thing was: you won an incredible playoff game in incredible fashion, tossing a long bomb over the Steelers’ impregnable front line. You were there; you led a team; you failed anyway. That’s the best kind of failure, because it had to happen. They—“they” being everyone who counts, those top dogs holding the heavy jack—saw that you didn’t have the right stuff. Yet everything about you cried out the right stuff. The only stuff you could have possibly had was the right stuff; you had no other stuff.

The people who believed in you, ma and pa and all the Tebow cousins, will slowly realize you didn’t quite have that right stuff, and they’ll think, “Dang, I thought Tim had the right stuff, he sure seemed like he did—he had everything going for him.” But you disappointed them, even if only a little, and that’s fine because everyone expects to be disappointed. Had you succeeded in crushing, Tom Brady-esque fashion, it would’ve been worse: even your confidants would have hated you, and their hatred would’ve been diamond-sharp, beautiful, forever. But now you’re just Tim Tebow, a failure sorta, a failure at the thing you’re known for: he was great at football, he failed at football, I think he plays baseball now.

To be one thing for a while, for 10 years, only to eventually realize the gears are kaput, the engine’s shot… you ask yourself why and the universe says why not. Then you drink some clamato juice and realize that it is what it is, it isn’t what it isn’t, what else could it be?