The Business of Major League Baseball is Business

The sport will flourish (for most franchises) despite domestic abusers and opioids. 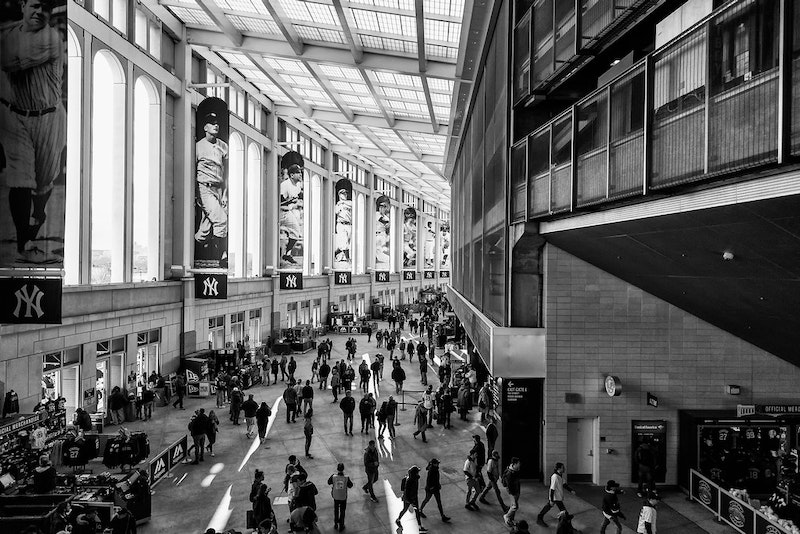 Perhaps you missed the New York Yankees elegy that was published on the front page of The Wall Street Journal on Oct. 21. Not me. Like millions of baseball fans, but especially those that root for the Red Sox, when domestic abuser Aroldis Chapman gave up a two-run bomb to Houston’s Jose Altuve in the bottom of the ninth on Saturday night—10 minutes after domestic abuser Roberto Osuna blew the Astros’ lead, giving up a homer to D.J. LeMahiue—I was gloriously stunned. A Yankees trip to the World Series, and probable win against the Washington Nationals, had been averted.

The article’s headline, “The Yankees’ Decade of Almost: $2 Billion Spent, Zero Titles Won,” was pro forma. After all, paraphrasing Calvin Coolidge, the business of Major League Baseball is business. Reporters Brian Costa and Jared Diamond write: “Many players sat in silence, some in tears. Manager Aaron Boone went from player to player, hugging them and whispering words of encouragement in their ears. Slugger Aaron Judge called the season a failure… The cruel irony of the Yankees’ lost decade [the team hasn’t won the Series since 2009, first year of the New Yankee Stadium, a pinball park with flashing neon on the inside, and an Albert Speer concourse look, “Steinbrennerstade,” in other words] is that no other franchise has been so openly dismissive of merely reaching the World Series. The Yankees… have won 27 championships, more than any other North American professional sports franchise.”

Players in tears? Jesus Christ. Tough toenails, guys, have a good sob and don’t forget to confer with your agents.

The Fox team covering the ALCS was just as awful as every autumn, led by Joe Buck and John Smoltz, and perhaps it was my sensitivity, but it seemed like a lot of Yankees jock-sniffing came from the broadcast booth. Even worse was during the Friday night game, an announcer, in talking about Astros loudmouth superstar Alex Bregman, said that 11-year-old Alex said at his bar mitzvah that he wanted to pursue baseball to demonstrate that hard work can pay off. Fair enough, but bar mitzvahs mark a Jewish boy’s 13th birthday. No correction. It reminded me of an ESPN game in September when moron John Kruk—who could stand to lose about 50—drooling over some ice cream sold by vendors at the park, said that at a junket he was offered charcuterie and foie gras, and had no idea what they were. One of his co-anchors, after allegedly Googling foie gras, said it was goose liver and cheese. Cheese?

Anyway, I was initially on the fence about whom to root for in the Series. Now that the Yanks are eliminated, it’s all gravy, no stress-watching, and on the one hand, I do feel gratitude to Houston for doing their duty; on the other, I like the Nationals and though Washington D.C. has seen teams come and go, it has been 95 years since the city had a baseball winner, and so I’m going with them. My son Booker, a Sox fan first and foremost, likes the Nats the best in the National League, and he upbraided me for waffling.

My choice was cemented by Monday night’s revelation from Sports Illustrated (the once-valuable Time, Inc. property that, like so many other prestigious money-machine magazines of the 20th century, is hanging by a thread). Reporter Stephanie Apstein was in the Astros’ jubilant locker room after they clinched the A.L. pennant, and wrote: “And in the center of the room, assistant general manager Brandon Taubman turned to a group of three female reporters, including one wearing a purple domestic-violence awareness bracelet, and yelled, half a dozen times, ‘Thank God we got Osuna! I’m so f------ glad we got Osuna’” As Apstein said, this comment by Taubman (probably already given his last cigarette before Houston’s firing squad dispatches him) was weird: Osuna just blew a save.

Devil’s advocate thought: it’s likely Taubman’s comment didn’t come out of nowhere, and was prompted by a reporter’s accusatory question. I have little sympathy for either the media’s spin on the truth or sports executives who employ criminals.

At the bottom of story, she does write about Chapman, another bad apple that’s so proficient at pitching that both the Cubs and Yankees overlooked his offenses and signed him. Conspicuously absent was any mention of Yankees starter Domingo German—who had a great season—another player accused of domestic violence who was suspended late in the season and banned from the postseason. His exact suspension for 2020 hasn’t yet been announced.

I’ve no idea how many MLB teams have zero tolerance policies for players who beat up women, or worse, but I’d be remiss in letting the Red Sox off the hook. Knuckleballer Steven Wright—just released from the team—was suspended for at least verbal violence that led to police coming to his home, not to mention a PED violation that put him out of action for 60 games. I don’t really care about PEDs—they ought to be legal and let the user gamble on future medical ailments; besides, it’s not as if half the players aren’t on some sort of banned, or soon-to-be-banned substance—but violence of any kind, whether directed at woman, man or child is intolerable.

After the World Series concludes, expect the bombshell story out of Los Angeles about the AL West Angels, where five players are suspected of opioid use to take center stage. Angels team communications director Eric Kay—now on paid leave—admitted gave pitcher Tyler Skaggs opioids. Skaggs choked to death on his vomit, after ingesting booze, oxycodone and fentanyl on July 1. You can be sure this latest difficulty—not just for baseball—isn’t confined to the Angels. Given the legitimate U.S. opioid crisis, why would anyone think athletes were magically exempt from being pillheads?