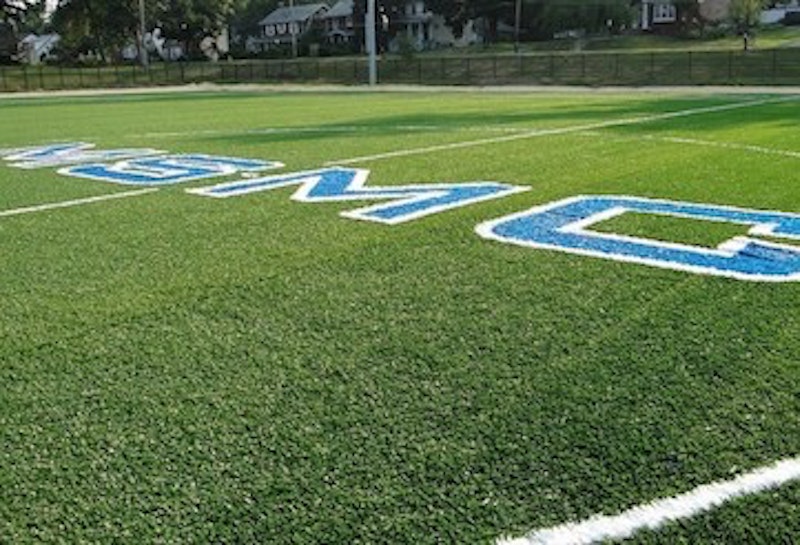 I was openly complaining, to no one in particular, about Christian Pulisic’s lack of playing time for Chelsea this season. I was in a newish storefront pub in Rhinebeck, NY., that has two excellent flat screen TVs on the wall, usually showing soccer. They’re inviting portals that can randomly draw you in to stand before them and admire the high-definition image of, say, a player’s cleat captured close-up as it rolls a Wilson Forte Fybrid II—the official ball of NCAA soccer—just as the referee whistles for the kick off. It’s St. John’s versus somebody, or the unbeatable Hoos of UVA damaging another squad. Doesn’t matter. It’s a beautiful game and it’s on and here’s a cold prosecco.

But back to my complaining. I try not to. But Frank Lampard keeping Pulisic on the bench yet again had me up in arms.

“He doesn’t play their style,” said an older gentleman to my right hoisting a pint glass. I’d spotted him earlier and he had ref written all over him. Adidas shirt with a regional soccer logo on it? Yes. Strange interest in the rerun of the Inter Milan match showing on the big screen? Check. But it was posture that gave him away. Soccer refs have that certain squared-shoulder arms akimbo upper body movement. Their gestures are slightly stiffened in a slowed-down physical cadence. They do this so the fans in the top rows and the idiots in the press box can understand their on-field verdicts and rulings. Their craniums seem to swivel at unnatural, yet painless, angles.

We then had a pleasant, meandering conversation about soccer. “You’re a ref, right?” I finally asked him. “Yes sir,” said the man who has probably been called “sir” by thousands and thousands of student-athletes running around a soccer pitch. He said he was in Rhinebeck to mentor a younger referee who was supposed to work a high school game that had been called off because of stormy conditions.

“I’m Dave Longacre,” the old ref said, extending his hand. One of his career highlights was reffing a Premier League exhibition in the New York area many years ago. “There I was running alongside guys from Southampton,” he said, smiling at the memory. We talked Liberty League soccer. Bard. Vassar. Union. “My son’s the coach down at Mount Saint Mary,” Dave said. “He’s got a good thing going there. You should check it out.”

Stop complaining about Chelsea and obey the old ref. So, I did. I went to Newburgh, NY, to Kaplan Field on the campus of Mount Saint Mary College to watch Dave Longacre’s son Kevin guide his team into action against the visiting Sarah Lawrence College Gryphons. The Knights won the 12-team Skyline Conference championship last season and look like they are going to repeat this year, though there is still some football to be played.

It was a pristine fall Saturday. The NextTurf field on the campus was sun-drenched but not hot. Roughly 155 onlookers had assembled for the match in the city that’s the Forbidden Zone of the Hudson Valley. Newburgh is famous for its Newark-style murder rate. Just 24 hours prior to kick-off one block away at the corner of Powell Ave. and North St., a Chevy Suburban rammed into a dump truck stopped at the light. The SUV burst into flames and the driver was burned to death. Three days after the crash, the driver’s identity had yet to be made public. Ho hum, another death in Newburgh. Not far from the crash site, Mount Saint Mary College banners celebrating the school’s 60 years offer the ironic slogan “Be The Spark.”

Coach Kevin Longacre lives in Poughkeepsie, so he’s familiar with some of the Hudson Valley’s urban grit. His ninth season at the helm of the Knights D3 soccer program is going swimmingly. He’s got three Skyline Conference championship trophies on his mantle and he’s closing in on 100 career wins. The University of Richmond graduate was head coach at Dutchess Community College in Poughkeepsie for 10 seasons before heading to Newburgh.

Mount Saint Mary dominated Sarah Lawrence, riding out a 6-1 win. The goal in the 63rd minute by Gryphons sophomore midfielder Humza Obaid (Karachi, Pakistan) marked the first time Sarah Lawrence has ever tallied against MSMC. Obaid gathered in a loose ball in the box and ripped one into the net cord over the shoulder of Knights keeper Tyler Rapp. Saturday’s win put the Knights 7-0 all-time against the Gryphons. Sarah Lawrence sits mid-table in the Skyline, with the loss to MSMC dropping them to 2-4-1 in the conference. The Knights keep piling up goals, with a brace from both lightning-fast forwards Joey Dolan (New Paltz, N.Y.) and Doyle Connor (New Windsor, N.Y.). Connor’s second goal of the game put him at 10 this season as Longacre sees several of his lads nearing the double-digit goal totals with five regular season fixtures remaining.

Dolan strikes the aforementioned Wilson Forte Fybrid ball with great authority. His early crosses were coming in at such velocity that few could catch up with them. The game against Sarah Lawrence was “Senior Day” so there were awkwardly placed balloons on the bleacher side of the pitch along with flower arrangements presented to senior players’ moms. I spent the first half of the match on the bleacher side which is up against the tennis courts. There was the usual guy in a Barcelona track suit sunning himself. There was the Tom Mees lookalike lonesome Sarah Lawrence supporter shyly barking his rehearsed support of his alma mater. There were surprise visitors from Commack who showed up for senior day. “Two-hour forty-five-minute drive,” one man announced to the other. A few mook fans showed up from a local dorm and began to heckle their own classmates on the field. It was good-natured but throaty. The male-dominant groups moving about the well-scrubbed campus made me think of a rather radiant nurse from Rhinebeck who attended Mount Saint Mary College. “You mean Mount Saint Mattress,” she would say with a perfectly executed eye roll.

As the Knights built their lead over the Gryphons, I noticed a certain Bob Bradley quality to Longacre’s touchline presence. This was especially evident when I switched to the Powell Avenue Stand side of the pitch for the second half. It’s a sharp grass berm rising up to the public sidewalk where locals bring those elaborate folding chairs with cupholders sewn in. There are ex-players milling about, a heckler who suffers from the long-winded heckles that are somewhat clever but need editing. There’s a Korean lady sitting in a parked Kia Soul with Pennsylvania plates on Powell Ave. with the door opened so she can watch the action from an elevated roost. The Powell Avenue Stand is the place to be for Knights soccer. Of the official 155 attendance tallied, at least 100 were on Powell Ave. There’s a tailgate energy to it, yet no alcohol in sight and nary a grill to be found.

Longacre is up 5-0 as the second half progresses but he doesn’t look happy. He’s not pleased that the midfield has failed to properly organize. And don’t get this son of a ref started on the performance of this game’s ref. MSMC finished with three yellow cards despite only committing eight fouls, while Sarah Lawrence tallied a brutal 13 fouls but were issued no cards at all by the man in charge, a New Jersey lawyer named Labinot Berlajolli. He seemed to take pity on the struggling Gryphons in the second half, but their boots-up ankle gouges well after the ball were bringing a certain nastiness from the Knights supporters and the MSMC bench. They were a bit bloodthirsty with such a large lead. I wanted to remind them to relax, take their foot off their opponent’s necks, and look up to enjoy the view.

From the Powell Avenue Stand, the college appears before you with a beautiful backdrop of rolling Hudson Valley fall foliage. This could be West Point if only the dress code was more rigid. Look at the Newburgh-Beacon Bridge crossing the Hudson. There’s the Fishkill correctional facility looming on the hill over Beacon and Interstate 84 with its water tower reminding the student-athletes to hydrate. The trees look like Lionel train set decorations in perfect oranges. In the foreground is the Lego-like Sakac Hall. There are cream-brick cottages and modernist dormitories all around. There’s a pugilistic steel bar fence ringing Kaplan Field, the kind of barrier infants used to get their heads stuck in if you trust old Brooklyn Eagle headlines.

During the match, the campus was hosting women’s tennis vs. St. Joseph’s College—Long Island and a large wedding over near Aquinas Hall, which also houses the CMA Gallery, the site of artist Norm Magnusson’s brilliant “kuhmyoonikayshun” exhibit of cheeky wordplays.

Enjoying the Powell Ave. atmosphere, the rabid supporters notice the two-keeper trick of Sarah Lawrence. They play one keeper in the first half, and another keeper for the second. Both yielded three goals apiece, so the blame is spread equally. From the Powell Avenue Stand I heard this exchange between Gryphons first-year head coach Evan Brandsdorfer (a Temple grad and former Saint Peter’s assistant coach whose dad was probably not a ref). “Could we get a little more quality on that?” Evan inquired in the direction of second half keeper Matteo Romano, a kid with rather fair skin for being from Sarasota, Fla. This was after Romano botched his third goal kick in as many tries. “That was my bad, coach,” Romano responded. During an injury break, Sinjin Mendenhall, a freshman defender for Sarah Lawrence out of Pasadena, CA, approached the bench requesting a water bottle toss. A teammate pitched a Gatorade bottle to him and when he caught it, the lid exploded off the top, blasting him with water as he dropped the whole kit and kaboodle. “Your luck is just not happening today, dude,” said one of the Knights supporters to many a chortle along Powell Ave.

Longacre lost his patience with ref Berlajolli with 15 minutes remaining in the Knights blowout. The associate in the commercial litigation group of the firm Riker Danzig Scherer Hyland Perretti marches from the midfield circle toward Longacre. “Uh oh, he’s got his serious face on,” narrates the Knights supporter guy. Berlajolli meets Longacre face to face at the touchline. Longacre protests five incidents of flagrant Sarah Lawrence contact after the ball. Berlajolli, a Seton Hall graduate (so he knows how to conduct himself on a Catholic campus) inserts his face centimeters away from Longacre’s (baseball style) and the crowd goes wild. At this point, magic words were uttered, and top-of-the-table Longacre perhaps channels his pleasant father and immediately backs down and walks away without punishment and still with that five-goal lead. The very Euro Metrosexual Berlajolli spins and crow hops his way back to his duties in charge of this D3 soccer slaughter of the innocents.

The Knights supporters spend the rest of the match riding Sarah Lawrence freshman midfielder Davide Calabi, who’s listed as five-foot-four. He’s from Milan, Italy and is matched up Abbott and Costello style against six-foot-two MSMC forward Matthew Iaria (Suffern, N.Y.) After the merciful final whistle from Labinot, Calabi removed his jersey and lined up bare-chested for the post-game handshakes. He also pulled up his shorts over his right thigh, exposing a tattoo of an upright blue snake for all to see. It seemed very ritualistic, perhaps some unspeakable rite handed down from football legacies in Northern Italy? The dispersing crowd loved it, as did I.