Every Stadium Has Its City

Paul Goldberger’s Ballpark is a magisterial look at the history of baseball, the architecture of stadiums, and their relationship to their cities. 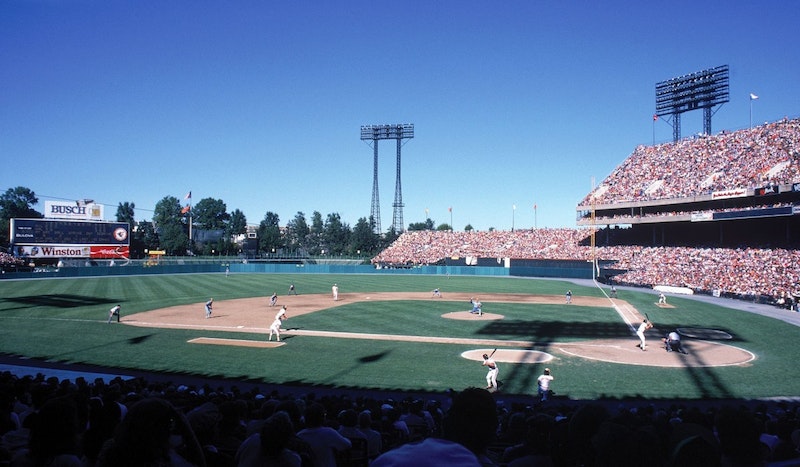 The 2019 World Series starts tonight, and another baseball season’s about to end. History’s being made in a sport with a special relationship to history: not only do the major leagues stretch back to the 19th century, but the image of the game’s unchanged from 100 or even 150 years ago. What we see on the field is the same as what we’d have seen in the first World Series in 1903. Mostly. While Babe Ruth and Ty Cobb played the same game in the same way as this year’s Astros and Nationals, the venues they played in were different.

For all baseball’s obsession with history, it has a tendency to elide the influence and nature of place. Ballparks are taken for granted, absolute and unchanging facts. That’s odd given each has individuality: particular dimensions, distinctive views over the outfield bleachers, sometimes quirks like a Green Monster. The reasons for that variety get ignored—all the design requirements and financial decisions that result in the physical fabric of the playing fields.

Paul Goldberger’s book Ballpark remedies that. It’s a magisterial look at a specialized subject, taking a close look at the development and architecture of baseball parks with particular attention to how the parks relate to the cities around them. A distinctive look at the history of baseball, revolving around architecture and urbanism, it’s both passionate and well-argued.

Early chapters cover the febrile development of the sport in the second half of the 19th century. The first admission charge for a baseball game was recorded in 1858, the first specialized ballpark built in New York in 1862. Baseball was a profit-making attraction, leading to Philadelphia’s Shibe Park in 1909, with 23,000 seats plus considerable standing room, along with a French Renaissance facade, cupolas, arcades, flagpoles, and busts of owner Ben Shibe and of Philadelphia Athletics manager Connie Mack.

Shibe Park was the first of the classic baseball stadiums—places like Fenway, Wrigley, Yankee Stadium. The configurations of their fields often came from fitting into street grids or specific lots of land; minimum dimensions for outfields weren’t established until the late-1950s. By that time, there’d been a sea change in baseball park design. Stadiums were the new thing after World War II, located in suburbs and surrounded by vast flat parking areas, concrete doughnuts often designed as two-sport facilities that could support both baseball and football.

Goldberger makes a strong point that these stadiums, sometimes wholly roofed over, represented a break with baseball tradition. You didn’t see the sky. You couldn’t look over the grandstands in the outfield to see the city beyond. Geographically and architecturally, the suburban stadiums were cut off from the cities that had spawned them.

Which was what made Baltimore’s Camden Yards such a spectacular reinvention of the baseball park in the 1990s. It created a craze for smaller parks that integrated old buildings and reflected the city around them, usually with a spectacular view beyond the outfield. That craze is only now beginning to fade, as new stadium designs incorporate entirely new neighborhoods, pre-fabricated pseudo-communities with retail outlets and movie theatres and various other attractions.

For Goldberger, these theme-park stadiums are different from the conscious retro nostalgia of Camden Yards. He argues that they’re wholly private venues, while traditional fields were in some way public spaces. I’m not convinced. Major league ballparks—and Goldberger consciously chooses to focus on major league parks, avoiding the minors and Negro Leagues—have always been commercial ventures, engines designed to separate fans and money.

To be fair, Goldberger’s conscious of this. He writes about the economics of the sport, and if his descriptions of land deals and financial machinations behind the construction of stadiums are brief, they’re concise and sufficient. And he considers the class issues implied by the ballpark, with its covered seats around the diamond and bleachers out past the outfield.

But he’s as vulnerable as anyone to the temptation to wax poetic over the meaning of baseball. The prologue opens by noting that attempts to make the sport the ultimate metaphor for America “tend to be exaggerated, sentimental, and mawkish,” and then goes on about the ballpark as an example of rus in urbe, the country in the city, where a Jeffersonian ideal of rural America meets the industrial infrastructure of Hamiltonian America.

Goldberger’s a skilled enough writer that this comes off as more plausible than it ought. Still, the book lives in its field-by-field description of modern stadiums, giving a series of detailed architectural readings of major league ballparks. As such it’s a success, establishing what’s good about well-designed fields, what fails in bad ones, and where each field fits into the overall history of the form. Illustrations are chosen well, with aerial photographs establishing what the fields look like in relation to their surroundings.

Goldberger makes a convincing case for baseball as a truly urban sport, the dimensions of the playing fields shaped by the places where they’re built. Paradoxically, the game that’s linked with the idea of a potentially infinite green field (no rule establishes a maximum distance for the outfield, only a minimum) comes most alive when it’s surrounded and shaped by a city. When you can see a skyline past the bleachers, when there’s an urban space into which home runs arc. When a field’s set among the population the team represents.

Ballpark is a useful corrective to the typical history of baseball, with a sense of physical space often lacking in the stories told about the sport. Goldberger’s sensitivity to the specific needs of a field’s dimensions is met with an equal sensitivity to the specific beauty of a good ballpark. He occasionally lets his love for the game overwhelm his detailed knowledge of off-field business practices. But that may be inevitable in baseball writing. He wisely avoids trying to evoke the beauty of the game, but instills an appreciation for the aesthetic of the diamond and the playing field. The book’s a distinctive view of the sport’s past, and a good one.