LeBron Suddenly Decides to Shut Up and Dribble

The opinions of socially-conscious athletes no longer relevant. 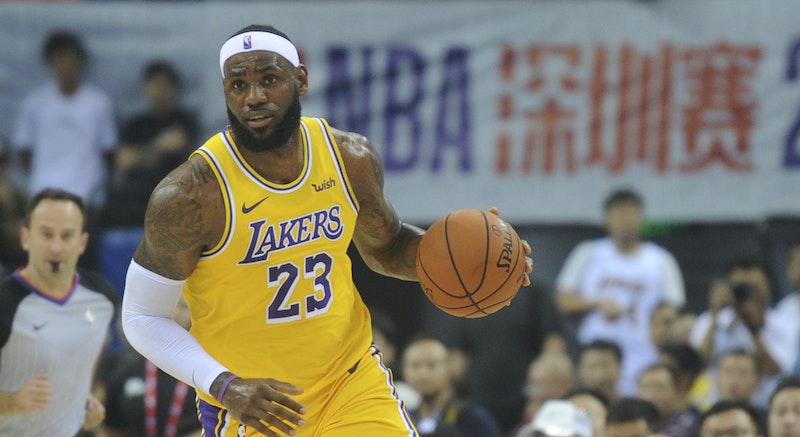 The era of people hailing professional athletes as moral beacons came to an abrupt end on Monday. Everyone had been waiting for LeBron James to weigh in on the controversy surrounding Houston Rockets GM Daryl Morey's tweet in support of the pro-democracy Hong Kong protesters because he's looked upon as the athletic world's number one fearless spokesman against injustice. But when LeBron finished speaking to the media, the Lakers star looked like what he once gained accolades for calling Donald Trump—a bum.

Before LeBron had tried to play the victim—one of his specialties—in the entire sordid affair, Golden State Warriors head coach and progressive popinjay Steve Kerr had already disgraced himself by lying that he wasn't "well-versed" enough on the Hong Kong issue to comment on it, even though he was well-versed enough to retweet this tweet from former Obama advisor Ben Rhodes on September 17: "Bibi backsliding, Boris flailing, Hong Kong rising. The authoritarian trend is not inevitable. Fight back. It will work."

Kerr was lucky this went unnoticed. So he could’ve at least had Morey's back by stating that he shouldn't be fired, which wouldn't have taken much courage. But the usually loquacious coach wasn't willing to stick his neck out even that far, putting the holder of eight NBA championship rings in the "bum" category too.

LeBron, with a net worth of $450 million, complained about the bad week his team and the league just had—he and the Lakers were in China when Morey tweeted—because of a statement defending people being shot and beaten for defending the rights they'd been promised when Hong Kong became a part of China in 1997. They're having much worse than a bad week, but this is all about LeBron, as usual. He's the guy with the martyr complex who once compared himself to Emmett Till after claiming his house had been defaced by racist graffiti, even though not even one photo of the alleged crime exists.

LeBron said that "families and individuals... can be affected" by Morey's tweet. Whose family or what individual would that be? Certainly not the families of any NBA players, whose average salary is over $6 million, or especially the family of LeBron James, who will earn $89 million this year. But it's unlikely that LeBron was talking about families or individuals in China, so we're left to conclude that the pampered star was referring to privileged players and NBA executives. If there had been a competent reporter in attendance, they could have asked him which families were affected, and how, but the media never challenges this superstar.

It was hard not to note, as LeBron pronounced that Morey wasn't "educated" on the Hong Kong issue, that the Rockets GM has an MBA from MIT, whereas LeBron graduated from St. Vincent-St. Mary High School in Akron, Ohio. After his disastrous talk with the media, the winner of three championship rings tried a Trump walkback by "clarifying" that he wasn't calling Morey uneducated on the Hong Kong issue, but rather on the backlash that his tweet would provoke. "So many people could have been harmed," he said, "not only physically or financially, but emotionally and spiritually. Just be careful what we tweet, what we say and what we do."

Be careful about defending the victims of a repressive communist regime? That's an unusual message coming from a bold social crusader. As for people being physically harmed by Morey's tweet, I can't guess what that's supposed to mean, although I do know that the Chinese government is physically harming people in Hong Kong. And spiritually harmed? Give me a break.

But we know what LeBron means by financially harmed, which is his real point. He sprinkled those other imaginary harms in there to provide him cover so we can't see his greed. LeBron has a $32 million sneaker deal and there are 300 million people in China who play basketball, only a fraction of who live in Hong Kong. As far as he's concerned, any socially conscious GM, owner, or player is free to speak his conscience just as long as it doesn't mess with his big Asian gold mine.

The good news about all this weasel behavior in the NBA, especially from sport's top preacher of social justice, is that it puts to rest the concept of "woke sports." These "athletes with a social conscience" have been exposed as frauds who talk big until their sneakers—made for what doesn't even approach the "living wage" their fellow progressives agitate for—are involved. Now that LeBron's been outed as a hypocrite, along with others, he's lost his power to galvanize people around his pet issues.

LeBron said, "When I speak about something, I speak about something I’m very knowledgeable about or something that hits home for me." He's speaking up now, but the only thing he's knowledgeable about is how this situation affects him. What's hitting home for him certainly isn't what the people of Hong Kong are going through. Perhaps LeBron, Steve Kerr, Steph Curry, and the rest of the NBA people who've said this matter's "too complex" for them to weigh in on need a few more years of intensive study to have the knowledge to comment on Hong Kong.