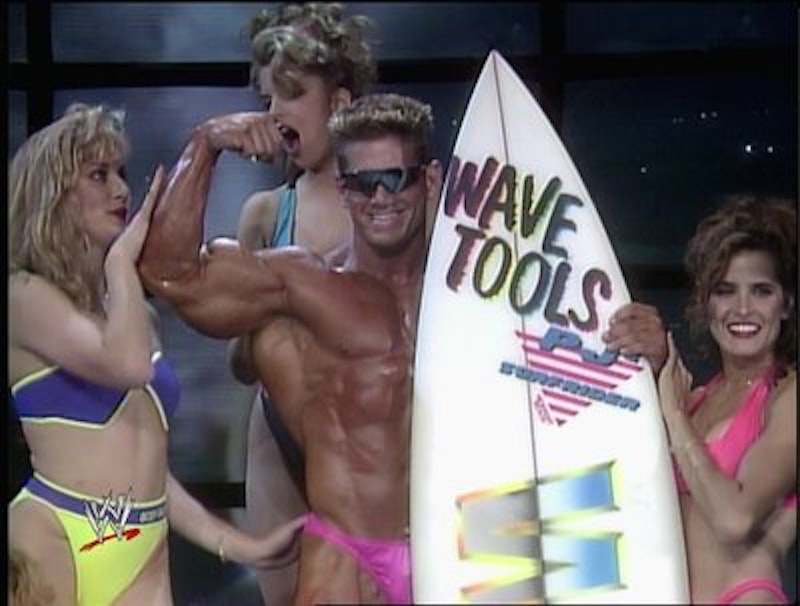 From 1990 to 1992, wrestling impresario Vince McMahon operated the World Bodybuilding Federation. Like many bodybuilding enthusiasts, McMahon assumed that people outside the hobby could be persuaded to share his interests. He thought that applying cartoonish, ready-made personalities to hypertrophied International Federation of Bodybuilding pros would turn them into morning television heroes for tween boys.

They couldn’t, and it didn’t. The WBF failed almost as soon as it began, with veteran muckraker Irvin Muchnick dropping a prospective post-mortem, “Pimping Iron,” in the June 1991 issue of Spy. McMahon’s love for the sport is inspiring—listen to any of his fulsome introductions of Gary Strydom—but the hopelessness of what he was attempting to accomplish should’ve been obvious in weeks, not years.

The World Bodybuilding Federation had a regular television show, WBF BodyStars, and produced two pay-per-view events. Buyrates for the PPVs were epically low; a fitness journalist friend tells me he’s heard they were in the double digits. But the promotional push was heavy, since McMahon had tied the WBF to a glossy muscle magazine (Bodybuilding Lifestyles) and a sports supplement (ICOPRO) that were advertised ceaselessly on both his wrestling and bodybuilding programs.

Although the BodyStars had a host of different gimmicks, from “man of the future” to “soldier,” they were invariably presented as good guys in their competitions against villainous WWF wrestlers. On Family Feud, the WBF’s top dogs took on WWF heel wrestlers Jacques Rougeau and Brian Knobbs plus managers as Bobby Heenan, Jimmy Hart, and Sensational Sherri. The resulting showdown is painful to watch, with Heenan making weak wisecracks and host Ray Combs oohing and aahing over the bodies of the beefcakes.

One of the strangest intramural showdowns staged by McMahon was a tug of war that happened on BodyStars, again pitting the good guys of the WBF against the bad guys of the WWF. This time, the bodybuilders were coached by veteran wrestler and ex-NFL player Jim Duggan, who towers over all of them, against Curt “Mr. Perfect” Hennig’s team of villains.

This event took place in 1992, meaning it occurred roughly a year into the BodyStars run on television and not long before McMahon, losing $200,000 a month and investigated by the federal government in response to allegations that he’d distributed steroids to his athletes, pulled the plug. The first thing you’re struck by is how much larger the pro wrestlers are than the BodyStars, with even smaller guys like Steve Keirn and Ric Flair stacking up favorably against their opponents. And when it comes to actually tugging the rope, they’re way more athletic, which makes sense since nearly everyone on the wrestlers’ side had played a college sport—some at a particularly high level, as was the case with Mike Rotunda, an accomplished amateur wrestler at Syracuse University. The second thing is how awkward the bodybuilders are when they’re required to talk on camera. The BodyStars have high-pitched voices, squeaky voices, soft voices... but in no case does anyone on their team appear at ease in his own skin.

It’s a strange event, with Jim Duggan at times urging the BodyStars to “get those WWF wrestlers” despite himself working as an active-roster WWF wrestler, and the villainous wrestlers eventually earning the win via cheating. “Those guys have Cadillac bodies and Volkswagen brains,” explained “Million-Dollar Man” Ted DiBiase, who’d allegedly bribed the referee to look the other way while he and his friends sat down on the sand to increase their leverage.

This event was undoubtedly part of some major ongoing wrestlers-versus-bodystars feud, some all-encompassing crossover storyline, but I can’t make heads nor tails of it. Although I voraciously consumed Weider brothers’ bodybuilding magazines (Joe and Ben Weider operated the IFBB, or at least part of it, and so were McMahon’s rivals) and pro wrestling in equal measure during the early-1990s, the WBF was such a flop it barely amounted to a blip on my radar screen. YouTube now contains an enormous archive of BodyStars and pay-per-view footage that McMahon appears to believe isn’t worth the time and money to remove via copyright infringement claims. If you’re high on something and looking for some weird, uncomfortable laughs, watch it; you’ll get your money’s worth.

As time passes, one can expect a number of in-depth WBF explainers to appear. Bleacher Report has already run such a piece, and YouTube wrestling channels have edited together their own mini-documentaries. All of this pop culture will keep being revisited, often by individuals whose association with wrestling consisted of watching Steve Austin pop tops during the Attitude Era or who became interested in bodybuilding after the viewing of a single Mark Rippetoe lecture on the military press transformed them into gym rats.

And it’s strange to see this marginal culture handled this way and by these people. I wasn’t the most devoted wrestling fan—I owned a dozen or so VHS tapes of Japanese wrestling, and stuff like the World Bodybuilding Federation escaped my notice because I was living in North Carolina and much more focused on the Southern-style World Championship Wrestling product—much less a world-beating bodybuilder and powerlifter, but I’ve logged two decades in each of these worlds. One needn’t be a subject-matter expert to tell a good story, of course, but it’s painfully obvious when the storyteller is out of their depth. For such people, pushing a take or a tale might be their living, but for me... well, with regard to these subjects, it has been my life.

Bodybuilding, in particular, is a niche sport. Based on extant tax filings, roughly 75,000 people around the country hold National Physique Committee memberships, and perhaps half of them compete in amateur bodybuilding events each year. For all the studies about how many people are on steroids—one NBC story from the mid-2000s estimated that five percent of middle school girls had used them!—public knowledge of anabolic-androgenic is shrouded in mystery. Even most users were stupid dabblers, having purchased garbage stuff from drug sources looking to take advantage of high school and college numbskulls.

And here’s another thing, what McMahon’s has learned all too well during his WBF misadventure: nobody knows or cares about bodybuilding except for bodybuilders, people who want to become bodybuilders, and the people who sell steroids to the people who want to become bodybuilders. Since deceit is endemic to the sport (Underground Steroid Handbook author Dan Duchaine remarked that truth is the first casualty of steroid use), you can’t expect straight answers from anyone involved in it. Meanwhile, news outlets only care about muckraking the bodybuilding world when there’s some noteworthy crossover into mainstream media that will interest viewers; otherwise, gym owners, supplement company owners, and bodybuilding promoters are left to their own devices, scamming each other and being scammed.

There’s a lot of money at stake in the muscle business, but it’s not nearly as much as people think. One former high-level competitor joked to me that the fitness empire maintained by Ben Weider and Jim Manion was essentially just a front for embezzling real money, a racket that warranted RICO Act scrutiny. Sociologist Alan Klein had surveyed the Muscle Beach crowd back in the mid-1980s and determined that roughly half of that beefy crowd was paying its way via prostitution—“hustling schmoes,” in muscle parlance—or appearances in male-oriented adult cinema.

If you’re an idealistic journo hoping to sell tales about these strange people to mainstream publications, it’s best to focus on exotics such as doomed social media stars Aziz “Zzyz” Sergeyevich and Rich Piana, those poor Brazilian guys who inject synthol into their arms in order to cause them to swell beyond recognition, or whatever flavor-of-the-week bodybuilder is tying their abs and lats to some progressive, identity-politics cause while remaining kayfabe about steroid use. But beyond that, there’s no there out there; you’ll wind up like those uncoordinated, goofy WBF BodyStars on the beach, pulling and pushing rope and wondering why no one is getting off.