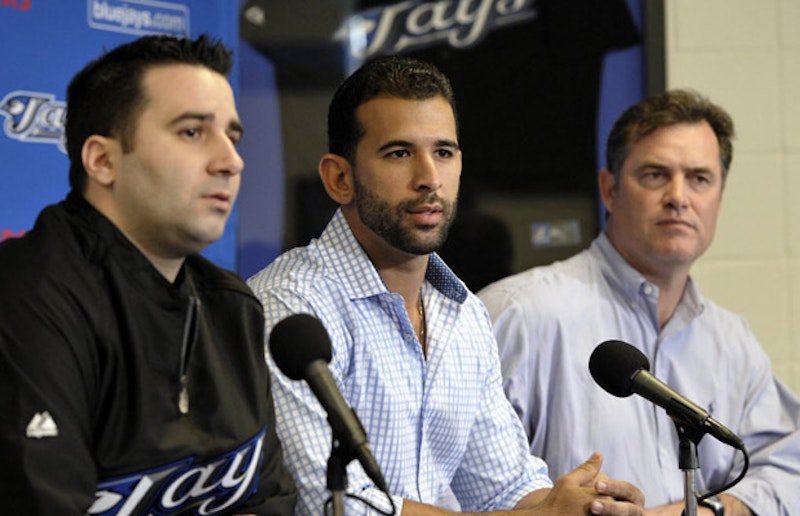 The AL East is—no breaking news here—far and away the most competitive division in Major League Baseball, housing the Yankees, Red Sox and Rays, who as of recently are all perennial threats to win 95+ games a year. The two remaining teams, the Baltimore Orioles and Toronto Blue Jays, are mere after-thoughts. That won’t be the case for long, though. Alex Anthopoulos, Toronto’s young general manager who’s about to enter his sophomore season, has simultaneously revamped his club and restocked the farm system.

Tampa Bay shocked the sports industry in 2008 by bursting up into first place in April and remaining there for the rest of the season, eventually winning the division and going to the World Series. The Rays went from worst to first, with a tiny payroll to boot. Toronto won’t have that kind of Cinderella story, but their fans should be grateful. Unbeknownst to most, the Jays are in a huge market and have a giant revenue stream. The principal owners have stated many times that when the club is in the position to win, they’ll open their wallets. Anthopoulos has even gone as far to say that payroll could realistically be pushed above $120 million.

Each of the three contending teams in the AL East has been constructed differently for the past five seasons, and obviously each method is effective. New York has graduated just three prospects who have contributed at the highest level in the last 10 years, and most analysts still aren’t convinced that Brett Gardner can maintain his production level of 2010. The way they’ve acquired their superstars is through free agency. Derek Jeter, Mariano Rivera, and Jorge Posada were farmhands—in the early 20th century, it seems—but they’re from a different generation. The Rays, on the other hand, are constantly trading away their talent in favor of younger, cheaper, and more abundant prospects. The Matt Garza deal (sending him to the Cubs) showed that GM Andrew Friedman is savvy in obtaining premium minor leaguers.

Boston is an interesting mix between the two styles, and to GM Theo Epstein’s credit, is the most effective. Having homegrown players act as the core of your team is smart because they are initially inexpensive and generally easy to extend on a reasonable contract, unless you’re dealing with a Scott Boras client. Dustin Pedroia, Kevin Youkilis, Jon Lester, and Clay Buchholz embody this description. Free agents should augment the core so that the team is strong enough to win, and that’s exactly what the Blue Jays are doing.

Kyle Drabek, Brett Lawrie, Zach Stewart, Travis d’Arnaud and J.P. Arencibia are all either ready or a year away from the majors. Each of those five prospects is part of Toronto’s future in baseball, and it’s looking bright. The deciding factor in the Jays’ timeline for success is the performance of certain players already on the major league roster. Adam Lind, Aaron Hill, Travis Snider, and Yunel Escobar could bounce back from disappointing 2010 campaigns and help the Blue Jays win in 2012. The regression of Jose Bautista is another X factor. The question isn’t whether he’ll regress; it’s how much his stats will decline. Finally, if Anthopoulos makes a splash in the next offseason, by trade or signing free agents, it could drastically improve their hopes of October baseball. Just a thought, but Albert Pujols and Prince Fielder both hit the open market next winter, and Toronto has an open slot a first base. It could be the deciding move.