Keeping Score Outside the Dugout

Avoiding the teen baseball bench at all costs. 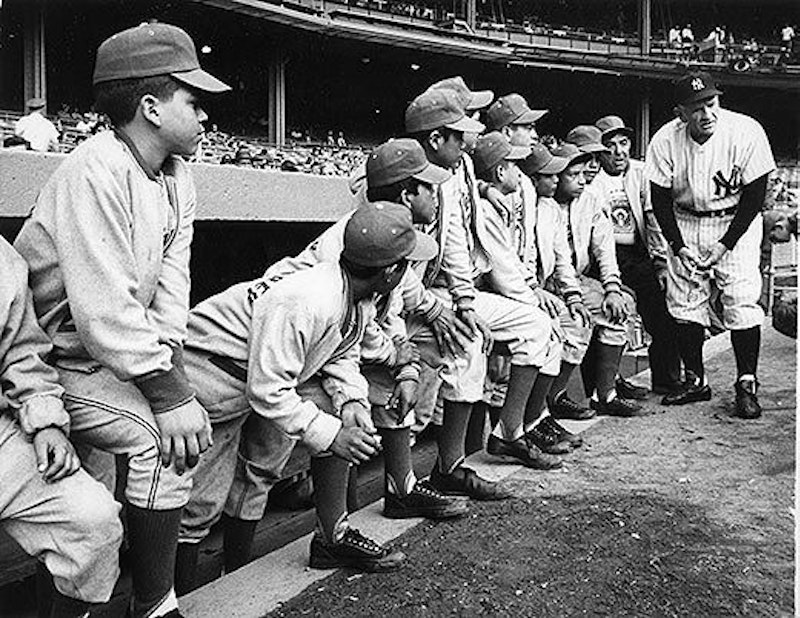 I’ve been keeping score at my son’s baseball games for a decade, since he was four. In one capacity or another, my husband has coached all those teams, first in tee-ball little league, through pitch and kid pitch, through years of travel teams as an assistant and now this year as head coach of our son’s rec team.

But this year something has changed. Sometime since last spring, these boys who were pre-teenish all underwent varying degrees of catastrophic hormonal change. They lumbered onto the field this year and although maybe a few, like my son, are around my height (5’6”), an alarming number of the (13-year-old!) kids on our team and other teams range up to six feet tall, my husband’s height. It’s so odd to see kids you think of as kids who are taller than your husband playing baseball or wandering around the dugout slacking off.

In the years I’ve kept score, there’s been a rhythm. Prepare the lineups, bring one to the other team, record stats in the book with my pencil, have an extra pencil in case one breaks, sit in the dugout on the bench when the players are on the field, stand in the dugout when they’re there to stay out of the way. In past years I’ve known all their names by the end of the first game. They chatted with me, there was much laughter. I gave out gum after games.

But this year, it’s different, and I’m not a big fan of change.

I had to learn electronic scoring, which I’ve avoided in previous years, happily preferring my “old-fashioned scorebook” over what I referred to as that “devil computer scorebook that could glitch or crash any minute.” But God forbid the parents still hard at work somewhere couldn’t get a play-by-play of what their kid was doing on the field or running season statistics or a game summary email, so now I have to score electronically, wi-fi signal and battery power and rain be damned. It’s nerve wracking and I miss my pencils, but only one more spring is left before Bobby’s in high school and I bet there’s no mom keeping score there, so soon enough my job will end.

I don’t know the boys’ names and don’t sit in the dugout because they’re huge (I’d be in the way), they have deep terrifying voices and my son would be embarrassed. A few of them still don’t know when they’re up to bat in the lineup because their height apparently hasn’t led to an ability to keep their big heads in the game. Some of them (my son excepted) are incredibly chatty—talking about everything except the game going on in front of them. The majority of seem unaffected by their performance at the plate or in the field—this is another change—at younger ages I found myself wanting to quote the Tom Hanks’ no-crying-in-baseball trope, but there’s no need for that now as there has arrived a newfound lack of emotion I find unsettling. While I can’t say I loved seeing a kid freak out after striking out, it was nice to see they gave a shit.

I sit in a chair behind home plate between the baseball parents and the team—both distracting when you have to keep the pitch count, easy or hard depending on whether the umpire (they now wear shirts that scream VOLUNTEER UMPIRE on the back perhaps to stave off attacks from hordes of angry little league parents) bothers to even announce it or you have to rely on sign language.

I guess I’m getting used to things because last night I managed to eat cheese fries since the snack stand is close enough to the field that I could keep score and order them. I’ll never get used to a deep-voiced kid asking me what inning it is, but I didn’t get any cheese on the devil computer.