Requiem for the Washington Redskins

A reminder that glory ends. 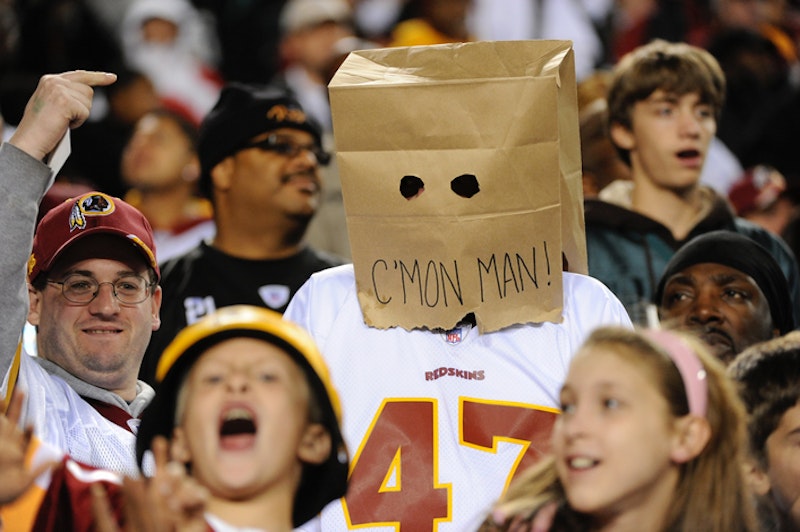 When I gave up alcohol in 1990, I spent several months—actually it was probably more like years—in the company of a physical, psychological, and spiritual echo. For years my life had centered around bars, clubs, and drinking (and in the 1980s, more). After the artificial high was gone it was like my body and soul craved the painless days being blissed out. If only there was a way to crawl back inside that soft, whiskey-vapor cocoon.

There wasn’t. I never went back to that life, and now thank God I let it go. My life has been a series of fun hobbies, intense loves, and devastating losses, like when my father died in 1996. I’ve been fully awake for all of it.

If only fans of the Washington Redskins could also make it through such a detox. Like the barstool drunk who can’t stop recalling his high school winning touchdown, they’re hanging on to a team, to a feeling, to a city that’s never coming back.

Growing up in Washington, D.C., I experienced the ecstasy of three Super Bowl victories—in 1983, 1988, and 1992. Then the Redskins moved out of RFK Stadium, and in 1999 ownership passed from the bizarre, eccentric, and lovable character Jack Kent Cooke to Daniel Snyder, the icy, control-freak Darth Vader of D.C. football. Snyder’s put the once-celebrated Washington franchise into a deep sleep. For year after year the team’s been like the slumbering King Theoden from The Lord of the Rings.

So I come to my fellow Redskin faithful as one of them. But it’s time for an intervention. The Washington Redskins are over. The golden days are not coming back. It’s time to follow the Wizards, the Mystics, or Gaelic football, which is an elegant and fluid game.

It sucks. But what Daniel Snyder has done to this team in nearly two decades is not just send them down a difficult path; he’s dragged them into an epoch-long fog of dysfunction and struggle, like something out of a Greek myth, where someone is pulled into the underworld and years later those on the surface world still stand around blinking, wondering what went wrong. As Thomas Boswell recently noted in The Washington Post, “In the past 16 seasons, [the Redskins] are 104-147-1. In the 32-team NFL, just five teams have fewer wins. The five: Browns, Lions, Raiders, Rams and Jaguars at 76, 91, 91, 95 and 100. In the NFC East, the Eagles, Cowboys and Giants have won 147, 137 and 129. Washington probably won’t move up relative to the league in the next few years. It is headed down toward being the second-worst team over a 20-year period.”

There are some moments in life where the joy, as religious writer Stephen Mitchell once put it, is so large it’s no longer inside of you, but you are inside of it. Falling in love. The birth of a child. The Who live in their heyday. And January 30, 1983, when the Redskins defeated the Miami Dolphins 27-17 at the Rose Bowl in Pasadena, California.

I was a senior in high school at the time, and after John Riggins scored on his incredible “Run to Glory,” the chaotic and booze-filled party I was at spilled into the streets of Georgetown. I called the vice principal of our school at home and told him we weren’t coming in the next day. Riding on the roof of a buddy’s pick-up truck, which made it easier to survey the pandemonium in the streets below me, and wrapped in a Redskins flag, I watched as the crowd, stoned on booze, pot and victory, wept, cheered, and gave high-fives. It was an out-of-body experience.

I got home at dawn, expecting a fierce lecture from my parents. They were both TKO in front of the TV, the room littered with ashtrays, empty beer cans and glasses. They’d been celebrating with friends also. The city had become one collective consciousness.

The Redskins won another championship in 1988, and again 1992. They were both sweet if not quite as euphoric as 1983.

Then came the move to FedEx Field, a soulless, Death Star substitute for the magic mojo of RFK. Then arrived Darth Snyder. Today sports analysts spend hour upon hour diagnosing what’s wrong with Washington—someone has an injury, they argue, or the current coach, Jay Gruden, sucks, or there’s something wrong with the grass on the field. They talk about bringing back the glory days. It’s like listening to people speculate about the Beatles getting back together.

In the film Star Trek: The Undiscovered Country, there’s a brief scene where Spock is in his quarters looking at a painting of the Garden of Eden—a setting “from Earth mythology,” as Ears puts it. The painting is there, Spock says, “to remind me that things end.”