Nothin’ But a G-League

Westchester Knicks are trip to island of misfit basketball toys. 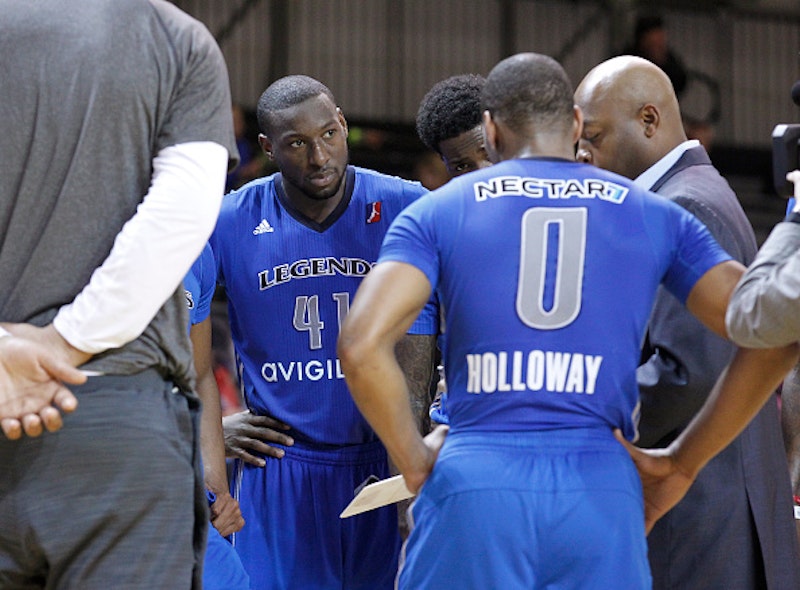 It was last winter that I so wanted to witness Jimmer Fredette overachieving with the Westchester Knicks, but the elements conspired against me and kept me away from the art deco environs of the Westchester County Center in White Plains, NY.

The Mormon lad from Glens Falls tore it up in Westchester last winter, had a cup of coffee with the Knicks but was not favored by interim coach Kurt Rambis. I missed it all, of course. Blizzards, traffic jams, late taxi shifts all prevented a trip to see the D-League wannabe Knicks. Not this year. Last Friday, I did a full taxi shift and bare-knuckled it down the darkened Taconic Parkway an hour-and-a-half to take in the Westchester Knicks against the Texas Legends in what is now called the G-League thanks to full sponsorship by Gatorade.

Yes, Jimmer, the former Brigham Young University star, is long gone, having signed with the Shanghai Sharks of the Chinese Basketball Association after the Knicks gave him the cold shoulder. Fredette is of course now tearing it up in China and enjoyed tussling there in 2017 with former Knick Stephon Marbury (Beijing Ducks). Jimmer has been hanging up 50-point games like so many complimentary egg rolls for a team owned by Yao Ming and sporting the same colors as those woebegone-yet-improving Knickerbockers of Midtown Manhattan.

There was a Mormon in the White Plains house last week, playing for Texas. He was Kyle Collinsworth and he was tattoo-free and didn’t commit his first personal foul in the game until midway through the fourth quarter against Westchester. At Brigham Young, he did his missionary work in Russia after his freshman year in Provo, then rung up a bunch of triple-doubles and took the Cougars to an NIT Final Four in February of 2016. Now he’s politely thugging with the Texas Legends of Frisco, TX, the G-League squad of the Dallas Mavericks. The G-League is 26-team circuit serving as the minor league of the National Basketball Association. Every NBA squad except for the Wizards, Blazers, Nuggets and Pelicans has a G-League entry.

The Westchester Knicks have represented their parent squad quite well so far, even without a major superstar leading the way. The entertaining 116-112 win over Texas last Friday put the “Dub” Knicks as they are called at 10-5 atop the Eastern Conference Atlantic Division. They’re now on a four-game road trip while holiday theatrical productions take over their home court. The Westchester roster is chock full of NCAA Division I standouts from the previous decade. Isn’t that point guard Trey Burke, the Michigan star from 2013 who left college early, got drafted and played for the Utah Jazz and Washington Wizards? Yes, that is Burke and he would score 27 against Texas, including crucial late-game points from the charity stripe. And who is the 7-foot-1 center out of Vanderbilt? Why that’s Luke Kornet, son of former Milwaukee Buck Frank Kornet, who was also a Commodore during his NCAA playing days. Kornet showed a dangerous three-point shot while maintaining that permanent bedhead I-was-born-in-Kentucky rural gothic demeanor.

It was fun to watch Kornet and 7-foot-1 teammate Adam Woodbury (a scowling March Madness regular with the Iowa Hawkeyes) attempt to corral Jamaal Warney of Texas. Warney, you might recall, frogmarched the Stony Brook Seawolves into the 2016 Big Dance but amazingly went undrafted. Warney came to Westchester in his Texas Legends uniform and poured in a cool 30 with 11 rebounds. But his double-double was overshadowed by Westchester’s first ever triple-double, turned in by Xavier Rathan-Mayes, a Canada native and shooting guard who played his college ball at Florida State.

I noticed a strange urgency to Texas players reacting to teammates who fall down. The Legends philosophy seems to be if you see a fellow player on the floor, you must sprint to his aide. The Knicks were a little slower to offer the helping hand to fallen comrades under the baskets, and Burke seemed to be telling head coach Mike Miller how to run the game as the closing minutes unfolded. There were other technical snafus at the scorers table which kept the three fresh-faced referees (including the pony-tailed Natalie Sago) quite busy. This trio conferred to over-rule each other at least twice on close calls, so it was nice to see diplomacy amongst the zebras.

The two-hour and seven-minute game was a see-saw battle on a night in White Plains when road crews so oversalted the roadways on the eve of the first winter snows that the atmosphere literally tasted of Super Pretzels. Upstaters know Westchester for its overly-aggressive youth soccer and it’s California-style gas prices, so it is usually a must to avoid but a necessity to pass through on the way to the city.

The Westchester County Center is located on a broken Parisian-style roundabout intersection unreachable from any angle. Parking lots are shoehorned over creek beds with creepy pedestrian bridges. The joint holds 5,000 people, and despite a brisk walk-up last Friday, the official attendance was listed as 1,453. The basketball floor drenched with Chase bank logos is situated in an auditorium space with a balcony running three-quarters around and a proscenium and stage at the far end. Behind a few caterer’s curtains is the “Heineken Club” stashed at an awkward distance from the basket. The ceiling rafters have haunting vaudeville-style bulb lighting that could pass for set design for any production of “The Elephant Man.”

Opting for a floor seat, I found myself ushered by a Wanda Sykes lookalike into a psych ward of some kind. Everyone around me had a head injury or a deformity and looked like they’d been prescribed to attend basketball as part of their recoveries. Further glances revealed endless fan grotesqueries I hadn’t see since witnessing a donkey basketball game back in central Ohio in the late 1970s. The arena is apparently under the auspices of Westchester County Parks, so uniformed employees are slouching around every post and pillar. Some engage in friendly horseplay and other time-killing on the clock staples. At the well-stocked Nathan’s franchise counter, lines are short and I see a police officer open a rear door of the concession area and reach into a cooler to grab a free soda. I think he saw me see him, so I had to watch my back for the rest of the G-League tilt fearing he would take me in because I “knew too much.”

My wobbly tavern table outside the Nathan’s was a bounce pass away from the Dub Knicks bench and I could’ve helped myself to the plentiful Gatorade bar as well as the stationary bike used for quick leg warm-ups. It was actually a pretty good sightline. In the foreground, the usual “operations” guys wandered about in ill-fitting suits wearing official team laminates. They were young and full of hair products. Westchester insists on having its own version of the Knicks City Dancers. I’ll refrain from commentary due to my lack of basic choreography knowledge, though they seemed to overdo the hip rolls and the track could have been louder. The mascot dog seemed very professional, decked out in a Knicks uniform with his name “Hudson” on the back. There was also the well-known army of burly men and women wearing “EVENT STAFF” polo shirts that are always a color you cannot identify. Their shoes are not appropriate for basketball hardwood, but they don’t care because they are EVENT STAFF.

I spent the second half in the balcony, which was much more civilized with its atmosphere reminiscent of a health-club day care room. Kids were corralled into corners. Drowsy couples sitting with one seat between them would raise an eyebrow during three-point shots but other than changes in body temperature, there was no other communication or “noise” coming from these fans. Two Westchester Knicks dancers would end up in the balcony to meet their boyfriends who had camped out over my left shoulder.

There is live video inside the arena, and most G-League games are streamed over Facebook Live, but as the crowd let the Friday fatigue take over, the only image I could conjure was many years ago seeing MSG journeyman broadcaster Al Trautwig sighing into his microphone, unaware he was on camera during a Rangers game break. Seated in the balcony my thoughts also drifted to the Hall of Mirrors ballroom in the Hilton Netherland Plaza in Cincinnati, Ohio. It’s an art deco feast for the eyes, and I appreciated the effort in the 87-year-old White Plains venue, which of course falls a bit short in comparison to the grand old Cincy hotel.

At the final buzzer it was charming to see both G-League basketball squads filled with players teetering away from (or on the brink of) bigtime pro salaries, lining up to shake hands. It reminded me of youth soccer, and, this being Westchester, the local teams I witnessed surreptitiously spitting into their hands just prior to the sportsmanship ritual.