The A's Gio Gonzalez Is Overrated

Billy Beane’s looking for another heist. 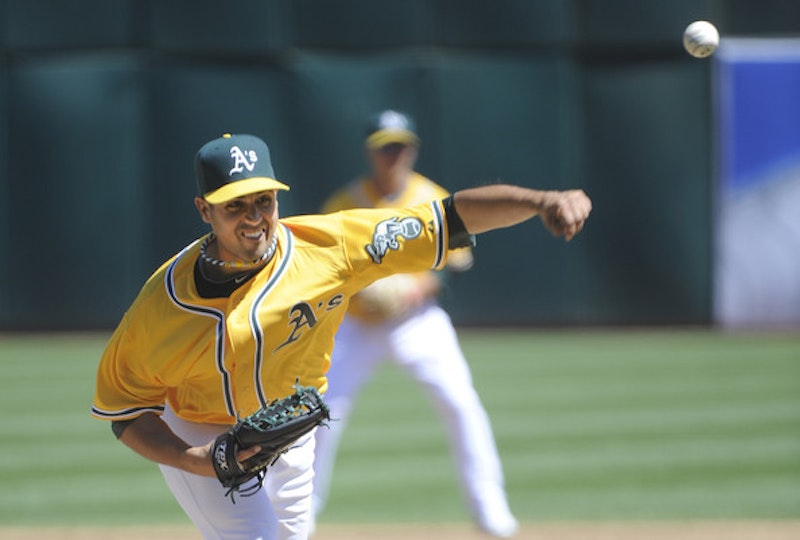 This year’s flimsy starting pitching market has drastically inflated the cost of the select few hurlers who are on the trade block. Not one legitimate ace has been tagged “available,” even though the insane asking prices would make you believe that. Starters like Gavin Floyd, John Danks, Wandy Rodriguez, and especially Gio Gonzalez are being advertised as front-of-the-rotation cannons while in reality they’re number two starters at best.

Oakland’s GM Billy Beane is trying to recreate the Danny Haren trade all over again. At the time, Haren, who was starting to get expensive, was coming off a fantastic year, in which his team failed to make the playoffs. With his 3.07 ERA, 192 strikeouts, and 222.2 innings logged, sportswriters and analysts were spreading the praise pretty thick. Beane saw his opportunity to strike. How often does a young, budding ace with many years of team control remaining show up on the market? That’s probably how Josh Byrnes, the Diamondbacks GM at the time, rationalized giving away his potent farm system at the time. Beane nabbed Carlos Gonzalez, Brett Anderson, and Chris Carter, and some smaller names.

With Gio Gonzalez, Beane has a lesser commodity, but he doesn’t want rival teams to think that. While he tries to peddle off the lefty as a hard-throwing, strikeout machine, potential suitors should look at Gonzalez for what he truly is: a promising, young pitcher who walks way too many batters and has taken advantage of the friendly confines of the Coliseum. No matter what your K-rate is, no starter can support a BB/9 above 4.00 without getting seriously lucky and having a good defense behind him. He doesn’t give up many home runs, but put Gonzalez in a hitter friendly park for half of his games, and who knows what would happen?

Another red flag that pops up is the fact that he only posted a 3.5 WAR, in a season where he pitched 202 innings with a 3.12 ERA. His 3.64 FIP clearly isn’t the cause, which suggests that his wildness at the plate is more of a problem then most analysts give it credit for.

Gonzalez isn’t a bad pitcher by any means. In fact, he’s probably the most talented member of Oakland’s youthful pitching staff. That doesn’t mean he’s worth the majority of a team’s farm system. The only players worth leveraging the future of your team on are impact guys that have a proven track record. If a Felix Hernandez or a Jacoby Ellsbury suddenly became available, then a “Danny Haren trade” wouldn’t be ridiculous. Legitimate aces and five-tool (minus the throwing arm) centerfielders are much more valuable then potential number 2/3 starters.

The Red Sox, Marlins, Yankees and Reds should focus on free agents like Roy Oswalt to tide them over for pitching needs, because they’re going to be glad they saved their prospects when a big-ticket player becomes available.