Cardinals Have Options If Pujols Departs 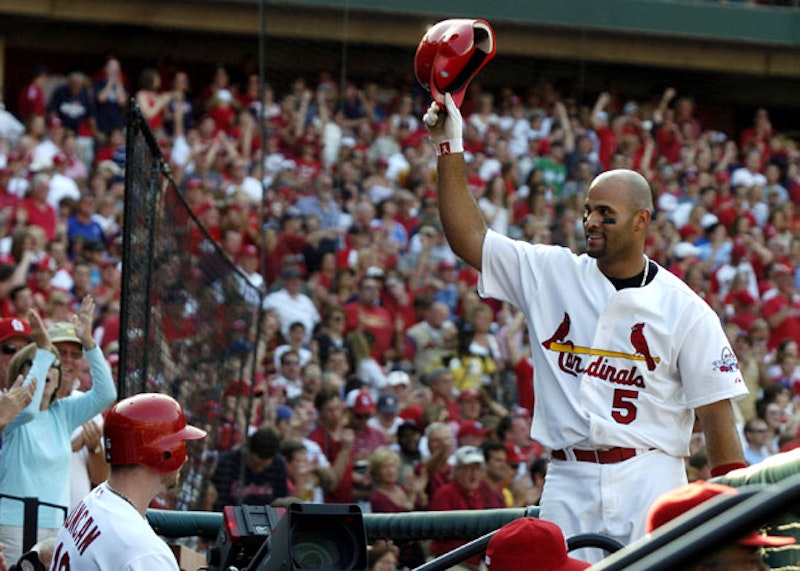 The market for free agent first basemen Albert Pujols and Prince Fielder has picked up as baseball's winter meetings approach. The Chicago Cubs are rumored to have interest in both sluggers. The Rangers, Angels and Nationals could be in the mix for Fielder. The Brewers have also reportedly upped their offer to Fielder, though they’re considered a long shot at this point.

The Cubs’ interest in Pujols may not be genuine. The next best thing to nabbing Pujols from the rival Cardinals would be to drive up the price for St. Louis. The Cardinals last offer to Pujols was reportedly nine years for $198 million. The Cubs may be hoping to apply some public pressure to St. Louis in hopes of the Cardinals agreeing to a potentially payroll crippling Pujols deal. The Cubs could certainly use Pujols at first base as incumbent Carlos Pena is a free agent. Pujols would also be a name to splash across the Wrigley Field marquee, and perhaps buy new GM Theo Epstein some time to remake the roster.

With all due respect to Stan Musial and Ozzie Smith, Albert Pujols is the best player in St. Louis Cardinals history. He's probably worth more to the Cardinals than to any other team. Losing the future Hall of Famer to the rival Cubs would be a public relations nightmare for the World Champs. However, if Pujols does depart, the Cardinals will have several viable options to replace him at first base.

Option number one for St. Louis would likely be to move Lance Berkman from right field to first base and insert super-sub Allen Craig into the lineup in right field. Berkman is signed to a club friendly one-year $12 million deal. The 35-year-old had a resurgent first season for St. Louis in 2011 as he hit 31 homers with a .959 OPS. Craig, who delivered several big hits in the World Series, was a jack-of-all-trades for St. Louis in 2011. In part-time duty he put up a .917 OPS and drove in 40 runs in just 200 at bats. Craig started 37 games in the outfield last season and could be in line for full time duty.

Option two could be former Cub Carlos Pena. The free agent started out slowly for Chicago in 2011 but rebounded to hit 28 home runs and draw 101 walks. He is likely seeking a two- or three-year deal after completing a one-year contract with the Cubs. Like Fielder, Pena's agent is Scott Boras. My guess is Boras will hold out Pena until Fielder and Pujols agree to deals and then attempt to spin Pena as the best available free agent slugger. A deal for Pena, or the insertion of Craig into the everyday lineup, would likely leave St. Louis with the payroll flexibility to re-sign starter Edwin Jackson or chase another veteran like Roy Oswalt or Mark Buehrle.

St. Louis could look to move World Series MVP and hometown hero David Freese from the hot corner to first base in the event that Pujols leaves. Freese has battled injuries and defensive mishaps through his career. The 2011 playoffs were definitely his breakout performance but at 28 Freese should not be confused with a prodigy. He is likely about as good at the plate as he'll ever be and he’s struggled defensively. In 156 career starts at third base Freese has made 21 errors and amassed a less than stellar .947 fielding percentage. He's played sparingly at first base. St. Louis could seek a defensive upgrade at third base and move Freese to first. The free agent market for third baseman is extremely thin so this scenario is unlikely, unless St. Louis can find a viable third baseman through trade.

The most likely scenario is for Pujols to return to the Cardinals on an eight- or nine-year deal for something around $200 million. If the Cubs’ interest in Pujols is legit, or some mystery team pops from the woodwork to make a run at the slugger, St. Louis will have some tough decisions to make. The versatility of Berkman and Craig will give GM John Mozeliak options.