Orioles May Get Older and Slower 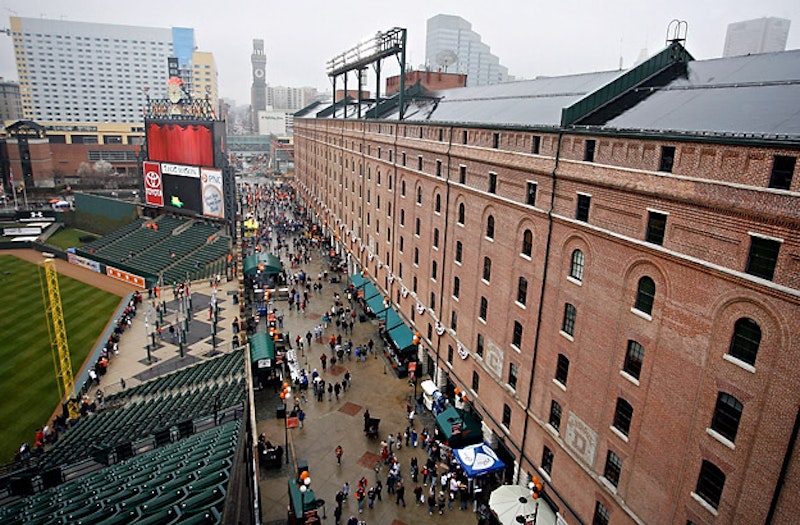 The Baltimore Orioles, as any casual baseball knows, have several areas of need. The most glaring are the starting rotation and the middle of the lineup. Baltimore currently has a collection of number four starters and number six hitters. The team desperately needs premium talents at several positions if they ever intend to contend with the current core group of players. GM Dan Duquette suggested on Monday at baseball's winter meetings that the club has some interest in free agent Prince Fielder, but was quick to add that fans shouldn't get their hopes up.

Fielder would be a perfect fit for Baltimore. His acquisition would push incumbent first baseman and cleanup hitter Mark Reynolds to DH and down in the order, both moves improving the club. Fielder would give instant credibility to the lineup and make solid contributors like Matt Wieters, Adam Jones, and JJ Hardy more effective. Fielder is also just 27 and entering his prime as a hitter. Let's end the dream sequence there. I don't think there's any way Peter Angelos coughs up the sum of $180-$200 million for the superstar.

The more likely scenario for the Orioles is the well-worn path of signing an aging slugger to a short-term deal. The candidate du jour are David Ortiz, Carlos Lee and the cringe-worthy Manny Ramirez. Baltimore has been linked to each player at the winter meetings in Dallas. The Orioles are in the market because last season's token over-the-hill slugger, Vlad Guerrero, is a free agent and not likely to return.

Ortiz probably makes the most sense of the rumored options. The 36-year-old is coming off a fine season in Boston in which he posted a .953 OPS and hit 29 homers. He’s familiar with the American League East and would likely come with a chip on his shoulder, assuming the Red Sox fail to match his asking price. The problem with Ortiz, in addition to his age and lack of defensive abilities, is that he is rumored to be seeking a three-year deal. Of course, that may not mean much as I've been seeking a Ferrari Testarossa, but would probably settle for a bus pass and some Subway coupons. If Ortiz gets his three years I hope it's not in Baltimore.

Carlos Lee is reportedly on the trade block as the Astros are in full tear down mode. Lee is under contract for the 2012 season at a whopping $18.5 million but it’s thought that Houston would eat a substantial portion of the deal in a trade. Lee has been productive in Houston, but not nearly enough to warrant his colossal salary. In 2011 he hit 18 home runs and drove in 94 runs but posted just a .788 OPS. Lee is 35 and would be changing leagues to come to Baltimore. Even at a bargain basement price Lee may not be a productive acquisition for the Orioles. The irony: Baltimore was reportedly interested in Lee as a free agent before he signed his current six-year $100 million deal with Houston. If you'll recall, the Orioles coveted Vlad Guerrero as a free agent in 2003 only to acquire him on the tail end of his career. Sense a pattern here?

While acquiring Ortiz or Lee would be a waste of resources the supposed interest in Manny Ramirez is downright laughable. It may all be just rumor at this point, fingers crossed. Duquette was Boston's GM when he signed Ramirez to the massive eight-year/$160 million contract following the 2000 season. It was assumed Ramirez would retire following last season's embarrassing steroid suspension. Now, he apparently wants back in and that MLB may treat his self-imposed exile as time served towards his 100-game suspension. "Manny being Manny" was always just a nice way of saying, "He's an asshole but he sure can hit." At this point there is no evidence that Ramirez can still produce enough at the plate to counteract his distractions. The Orioles have made a habit of doing really dumb things over the past 15 years, as their on-field record reflects, but in an offseason where a young, franchise-altering slugger like Prince Fielder is available the idea of Baltimore signing a selfish cheat like Ramirez may just be the dumbest thing they've ever done.