How long will it last? Does it matter? 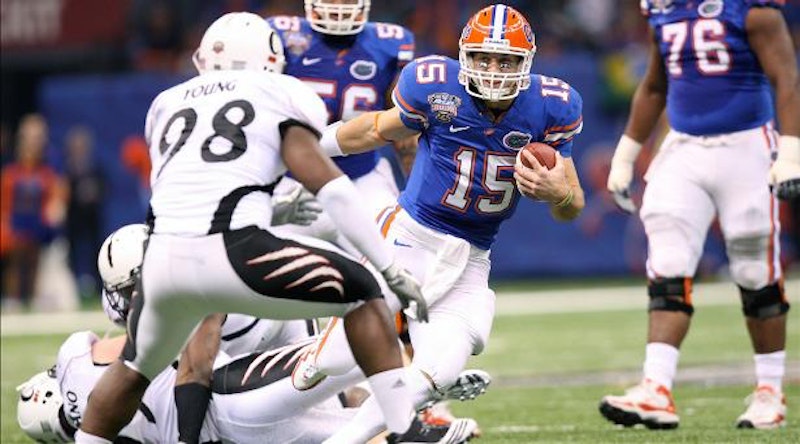 I must admit I love Tebow mania. It’s spreading like an epidemic as the Denver Broncos’ Tim Tebow piles up unlikely wins week after week. Tebow has delivered some memorable on-field performances, both good and bad, over the past six weeks, but it’s the off-field coverage of his play that has piqued my interest.

The one word that keeps coming up whenever Tebow is discussed is “unsustainable.” The pundits and former jocks at ESPN, Fox and CBS practically climb over each other every week to denounce Tebow’s recent performance as “unsustainable.” ESPN’s Merril Hoge puts his terrible towel down long enough each week to scream from the rafters about Tebow’s deficiencies. You seldom hear anyone talk about what Tebow does well. It is the visceral level of near-disgust with Tebow’s on-field talents that has drawn me in to this phenomenon.

I’ll admit as a Catholic school-educated non-believer I get tired of hearing Tebow crow about Jesus after every game, but is he really any different from the defensive end who thanks God and his Mama every time he makes a tackle? Tebow wears his faith on his sleeve and that’s just fine; if I had any that’s probably where I’d wear mine too. I think it’s kind of tacky to attack Tebow for his faith when nearly every NFL game ends with opposing players kneeling in prayer at midfield. It’s not my thing but if it gets you through the day have at it.

Tebow is clearly unorthodox. He doesn’t do anything by the book, and that seems to drive NFL commentators insane. I guess if you’ve spent your entire life convincing yourself that a game must be played a certain way you might get a little testy when someone who doesn’t do anything “right” seemingly can’t lose. I think that’s where the real irritant is for people. It’s not so much that the Broncos are winning, but that Tebow isn’t losing. The conventional wisdom was that Tebow’s long delivery and inaccuracy would lead to a bevy of fumbles and interceptions. He’s started six games and we’re still waiting for the turnover avalanche to come crashing down around Denver’s playoff hopes. Tebow has committed just two turnovers in his six starts.

Much credit should be given to Broncos Head Coach John Fox and Offensive Coordinator Mike McCoy. While critics have suggested that the Broncos game plans are stunting Tebow’s development as a pocket passer, McCoy and Fox have embraced their quarterback’s rare talents and built a game plan to suit him. Fox has done what good managers and coaches must do; put your people in position to succeed. Dropping Tebow back to pass 40 times a game in a pro-style offense would’ve been stupid and short-lived. Most importantly for Fox, it would have lost games for the Broncos. Fox is the one person who is unconcerned with the sustainability of Tebow as an NFL quarterback. Fox’s job is to win games. Through six starts Tebow is 5-1. My guess is Fox is just fine with that kind of sustainability.

It’s also important to remember that Tebow isn’t doing this alone. The emergence of Willis McGahee from backup to starting tailback has energized Denver’s run game. The return to health of pass rusher Elvis Dumerville and dominance of rookie linebacker Von Miller has propelled the Broncos’ defense. The ability of Fox and McCoy to put ego aside and develop game plans to exploit the talents of their players is rare in today’s group-thinking NFL. Tebow has been asked to take care of the football and make a few plays late to put the team in position to win. It really doesn’t sound so far-fetched.

Let John Elway worry about Tebow’s sustainability. I’m not John Fox. I’m not John Elway. I couldn’t care less about the Denver Broncos or their playoff hopes. Are Tebow’s winning ways sustainable? Who cares? It sure is entertaining.