LeBron James is the Cure for Post-Superbowl Blues

Because football isn’t a year-round sport. 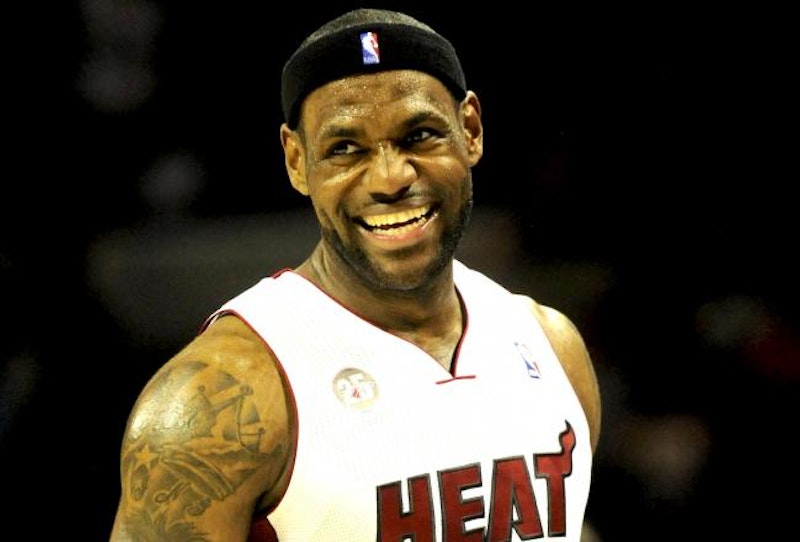 Much to the chagrin of Jim Harbaugh the NFL season came to a stunning and sudden end last week when the Baltimore Ravens held off the 49ers to claim victory in Super Bowl XLVII. The days following the game offered a whirlwind of revelry (Ravens’ Parade), late night television spots, debate, and complaints about officiating, but actual football games weren’t on the docket. What’s a sports fan to do now that football has ended, the NCAA tournament is a month away, and baseball is nothing but a tease with its sun drenched reports for the next six weeks?

I’m not a huge NBA fan, but I do respect the athleticism required to play basketball at such a high level. You’ll never catch me watching a Bobcats vs. Wizards tilt but the big games and names tend to draw my attention. And there’s no bigger name than LeBron James. I grew up rooting for the Miami Heat (I’m a chump for expansion teams) so I never had to get over “The Decision” to see the greatness in King James. I was thrilled when James came to the Heat and, save for the 2011 Finals when Miami lost to an inferior Dallas Mavericks squad, I’ve pretty much been thrilled ever since.

James is in the midst of perhaps his greatest season, which is saying something for the greatest player in the world. He’s currently shooting an incredible 56.2 percent from the floor and 42.1 percent from beyond the three-point line—both marks would be career highs for the superstar. I’ve always thought James looked like a video game character playing against humans but he’s somehow managed to take his play to another level this year. James is on an incredible shooting streak over the past week and added to the Lakers’ season-long struggles on Sunday when he scored 32 points on 12-for-18 shooting in Miami’s 107-97 win. In the month of February James’ shooting is 68 percent from the floor and an astounding 56 percent from three-point range. James has been basketball’s best player for years but he’s now also the most efficient. He thrills crowds and television audiences alike with an array of pinpoint passes, bullish drives to the hoop, and patented three-quarter court alley oops from teammate Dwyane Wade.

The NFL Network would like you to believe that football is a year-round sport with the NFL Combine, draft, mini-camps, training camp, and pre-season games filling out the offseason schedule. No thanks. I have no interest in watching college offensive lineman run around in their underwear and the league’s revamped primetime scheduling of the draft has resulted in me losing almost all interest in the event. I’ll see the NFL again in September. I’m stoked for the start of baseball season but there’s still six weeks of winter to contend with before the promise of April nights at the ballpark are a realistic option. In the meantime I’ll be watching today’s best basketball player torch opposing defenses, lead his team to the playoffs, and have a helluva lot of fun doing it.