Ravens Are Subject of Ridiculous Rumors

Count on it: Joe Flacco’s staying in Baltimore. 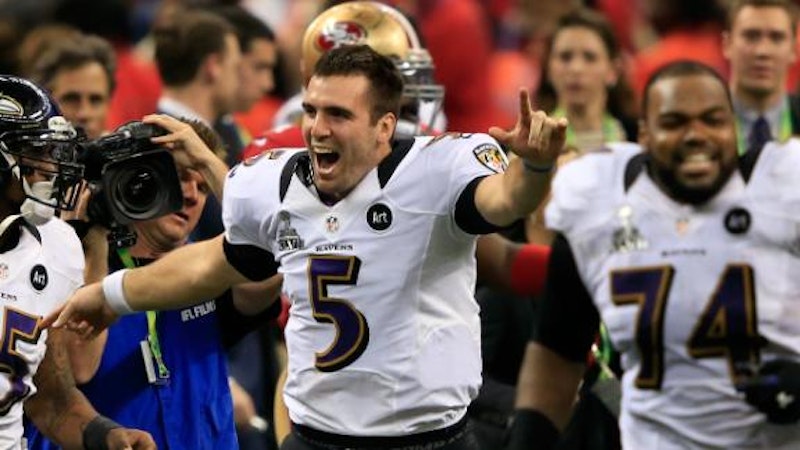 The Baltimore Ravens’ Super Bowl victory was accompanied by the typical round of festivities: late night television appearances, magazine covers, and a little extra love from the national media. Unfortunately, the media attention’s been short on glowing accolades and high on cockamamie rumors of impending salary cap doom.

Don’t get sucked into the vortex Ravens fans.

Peter King, a normally reputable NFL writer for SI.com, stirred the pot earlier this week with the ridiculous notion that Ravens’ QB Joe Flacco could go to the Cleveland Browns as a free agent. King laid out a flawed, though factually plausible, scenario in which the Browns could exact the ultimate revenge on the Ravens and steal the Super Bowl MVP quarterback. Yes, Flacco is set to become an unrestricted free agent in March, but the Ravens have publicly stated numerous times over the past few weeks that Flacco isn’t going anywhere. If the Ravens can’t agree to a new long-term deal with the QB they’ll slap the exclusive rights franchise tag on him and move on. King suggests that Baltimore could designate Flacco as the franchise player but not use the exclusive rights tag. In that scenario the Ravens could lose Flacco to another team willing to cough up two first round picks and a boatload of cash to the QB.

King’s scenario would require the Ravens to be complicit in their own demise. Smart organizations that contend for championships don’t routinely sabotage themselves. GM Ozzie Newsome spent his first 13 years in Baltimore looking for a franchise quarterback. Now that he finally has one he’s not going to let him walk out of town and go chasing the likes of Matt Flynn and Alex Smith. In order for Flacco to end up in Cleveland the Ravens would need to start acting like the Browns. Flacco has as much chance of starting under center for the Browns next year as Otto Graham. Newsome is one of the best general managers in sports. If King thinks Newsome hasn’t prepared for the possibility of franchising Flacco and incurring the $20 million cap hit in 2013 he hasn’t been paying attention.

Mike Florio at Profootballtalk.com joined the nonsense train as well this week. On Feb. 12, Florio speculated that the Ravens could cut linebacker Terrell Suggs in an effort to reduce their 2013 salary cap obligations and make room for Flacco’s new contract. The problem is that cutting Suggs would save the Ravens less than $2 million against the 2013 cap, and leave the team with about $11 million in dead money still owed to T-Sizzle. At the end of the article Florio admits that his suggestion is pure speculation. Suggs is a polarizing figure and the inclusion of his name in the headline for a story with no merit should be noted. By the time the reader has reached Florio’s disclaimer they’ve already frantically clicked the link and read the story.

Florio and King are paid to cover football year round. The end of the season has left a void in the news cycle despite the NFL’s best efforts to establish the league as a year round sport. The public’s thirst for football news is doing more harm than good when reputable information sources like SI.com and Profootballtalk.com make a habit of wild speculation and headline baiting.

The Ravens are over the cap, but they can save $6 million by cutting fullback Vontae Leach, reserve OG Bobbie Williams, and C Matt Birk. Ravens fans can say bon voyage to free agents Paul Kruger and Cary Williams and go buy Courtney Upshaw and Corey Graham jerseys. Flacco will be the quarterback in September, and for years to come, and the Browns will still stink. The only real question facing Baltimore this offseason is the status of future Hall of Famer Ed Reed. The safety sure talked like a guy who wanted to come back to Baltimore during the post-Super Bowl euphoria. The Ravens will let the 34-year-old free agent test the market and hope that another team doesn’t offer to overpay him. If Florio and King post some actual news concerning Reed I’ll be all ears. Until then they should leave the worthless rumor mongering to Bleacher Report.