The young shortstop will be a hot commodity when he hits free agency in two years. 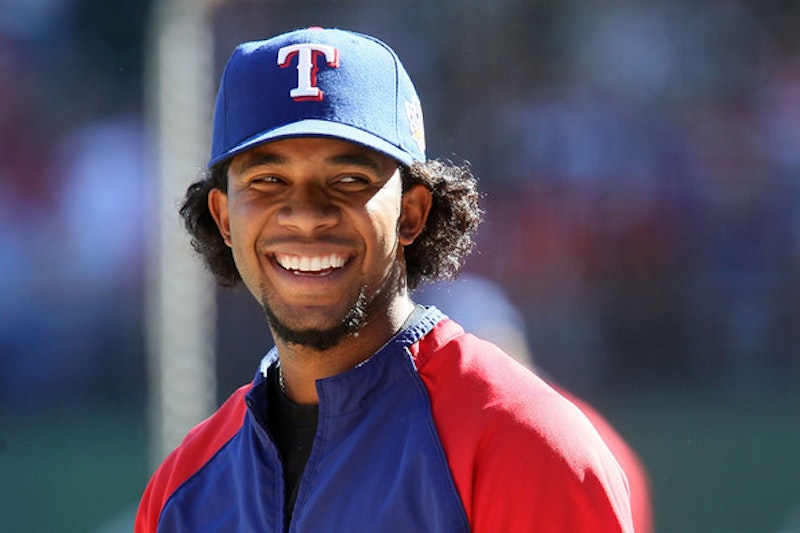 “’If [the Rangers] want to keep talking and get to a point where this is a really great offer for my future, yeah, I’d do it for sure,’” Andrus said Thursday. A ‘great’ offer, however, likely would have to be for something to keep him past free agency by eight to ten years and would likely have to be similar to Ian Kinsler’s $15 million average.”—Evan Grant, SportsDayDFW

Is Elvis Andrus really worth $150 million? Yes. My initial reaction to Evan Grant’s comments was agitation: how can a player who’s hit a total of 14 home runs across his four-year major league career and still hasn’t hit above .286 command such a contract? You could make an argument that Andrus’ speed defines his offensive game, but he swiped only 21 bags last year.

Nevertheless, the 24-year-old has two things going for him that most players approaching free agency don’t: youth and the ability to play shortstop. Andrus is so young that signing him to a 10-year deal would not end in catastrophe. When the contract expired, he’d barely be 35. That means that the Rangers would have him locked up for his prime years and not have to deal with a hefty amount of decline. More importantly, though, he plays shortstop. If Andrus played any other position, except maybe second base, he wouldn’t be in line for such a big contract. There are so few quality shortstops in the Majors that Andrus, with his .286/.349/.378 slash line, was fourth in fWAR among full-timers at the position. (A slew of top offensive shortstops are coming along in minors, though. Names like Manny Machado (who finished the year with the Orioles), Jurickson Profar, Xander Bogaerts, Francisco Lindor, Javier Baez, Addison Russell, Alen Hansen, and Hak-Ju Lee will revive the barren position of its vitality).

Also, Andrus hasn’t reached his offensive ceiling yet. According to ESPN’s Keith Law, “Andrus’ bat has another leap in it, one that will put his average in the low .300s and bring his OBP to a point where he’d help just about any club at the top of the lineup.” Although he didn’t do the best job of displaying it last season, Andrus has shown that he can be a patient hitter. If he can raise his BB% a few points, while managing a batting average in the low .300s, he could be one of the most valuable infielders in baseball. If that comes along with a slight power spike, something that sees him hitting 10-12 home runs a year, which many scouts see as a possibility (just look at Jacoby Ellsbury), then he’s an MVP candidate. Rangers GM Jon Daniels won’t be investing in the Andrus of the past, he’ll be investing in the Andrus of the future, who projects to be a much better player.

Locking up the shortstop position for the next decade in Arlington would be a pivotal move for the Rangers. Yes, it would send top prospect Profar over to second base, which in turn would slide Ian Kinsler to first base or a corner outfield position, but so what? Profar, who is also a plus defender, would handle the keystone with aplomb. And Kinsler will just have to deal with it. A double-play combination of Andrus and Profar would be killer, probably tops in all of baseball.

Right now, Andrus is worth a little over $15 million per season. Three years from now, barring a debilitating injury, his value will skyrocket. If the Rangers can lock him up now, in five years people will be calling the contract an absolute steal.