His and Hers Pro Basketball 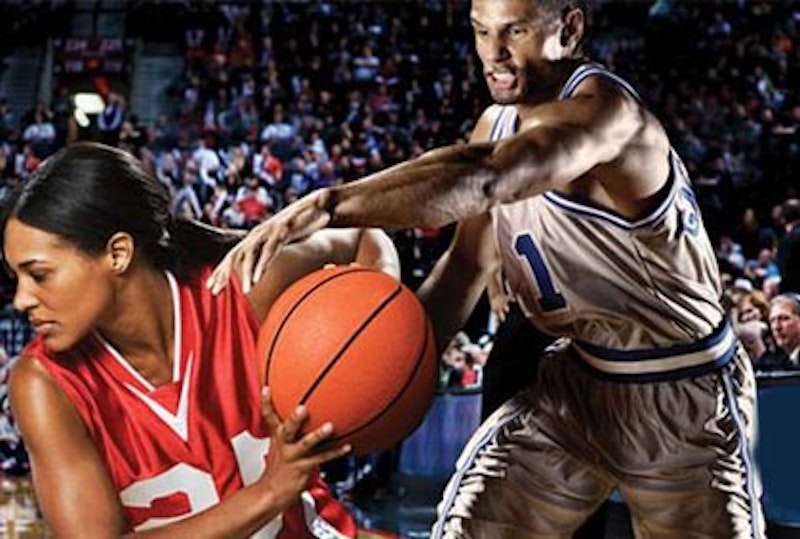 Strange things can happen in the center of the college basketball March Madness vortex with its multi-channel television assault and a citizenry collectively hunched over shattered tournament brackets. During these crazed hardwood times, you might stroll the neighborhood and suddenly find a public try-out for a fledgling professional co-ed basketball league.

It is called the Mixed Gender Basketball Association. Men and women play on the same team with a set of rules variations only slightly resembling a boozily-authored crib sheet for wannabe contra dancers. Women players score four points if they hit a shot from beyond the standard three-point arc. The league has two teams already, both based in nebulous New Jersey locales and sporting roller derby style names (New Jersey Jammers, New Jersey Ballers). Since one of the league executives lives in the mid-Hudson Valley of New York, the MGBA held a weekend tryout in Annandale in the gymnasium of Bard College, widely considered the Mecca of losing basketball. Of course Craigslist was utilized to spread the word, and there were promotional flyers taped over various payphones in Dutchess County villages. The flyers asked: “Do you want to get paid to play professional basketball?” A league official told the weekly Hudson Valley News each team will have a 12-person roster and players will be paid $25,000 to play a 40-game season. The league website lists an optimistic payload of franchises and a Russian doll-style framework of teams separated geographically into two divisions, Atlantic and Pacific. The divisions are in turn split into two conferences, and there will be two leagues in each conference. There is even a team listed for Hawaii in the Far-West League of the South Conference of the Pacific Division.

There is something both soothing and annoying about 12 basketballs of any size being dribbled in an empty gym in random sequences by isolated players mustered around the orange metal rims. Outside the gym a stray German shepherd paraded past a black stretch limo parked on the roadside either dropping off MGBA league poo-bahs or picking up one of the wealthy Bard students leaving for the school’s reluctant spring break.

Roughly a dozen heavy-legged hopefuls showed up, paid the $100 registration fee and ran through drills. The gender split was six men and five women. There were lots of league officials carrying metal briefcases on the sidelines, but nary a stopwatch in sight. About 10 minutes into one of the mini-scrimmages the first serious man-woman collision occurred in the paint. She eventually got up, uninjured, but the number of blocked shots (men towering over the women players) was in the double digits after just 20 minutes of try-out play. From the bleachers there was the occasional cry of a toddler and more than one stroller being attended by fatigued mothers. A full hour after the announced registration time of 10:30 a.m., banners were taped to the gym walls announcing the MGBA try-out and registration carrying the league motto “The time is now.”

There were two overstocked water and Gatorade tables that could’ve hydrated the Chinese Red Army given the low turnout at the event. The banners also carried the league logo, which echoes the standard red-white-and-blue silhouetted athletes first designed by Alan Siegel (NBA logo) and Jerry Dior (MLB logo). The MGBA logo resembles a sea creature, and the female player on the right side in the red quadrant could certainly benefit from a sports bra. I sent the logo to Seattle-based graphic designer and branding expert Shawn Wolfe for his two cents from the city that lost its NBA franchise a few years ago. “I don’t feel this works particularly well as a logo or trademark symbol,” Wolfe said. “It appears to be the Pompeii silhouettes of mixed gender conjoined twins fused at the abdomen. Talk about sibling rivalry!”

The league website mentions a draft to be held at a future date. Further inspection of the site shows many other aspects of the league are on a TBD basis. The Annandale try-out was followed by a Sunday talent search in Harlem, which probably drew more than the 11 dreamers who made it out to the remote Bard gym. League owners—based in West Orange, NJ – previously told reporters the MGBA intends to bridge the gap between the WNBA and NBA seasons. A glance at both of those league calendars shows that gap. It is the 30 days known as the month of September.