Advice for the unlucky. 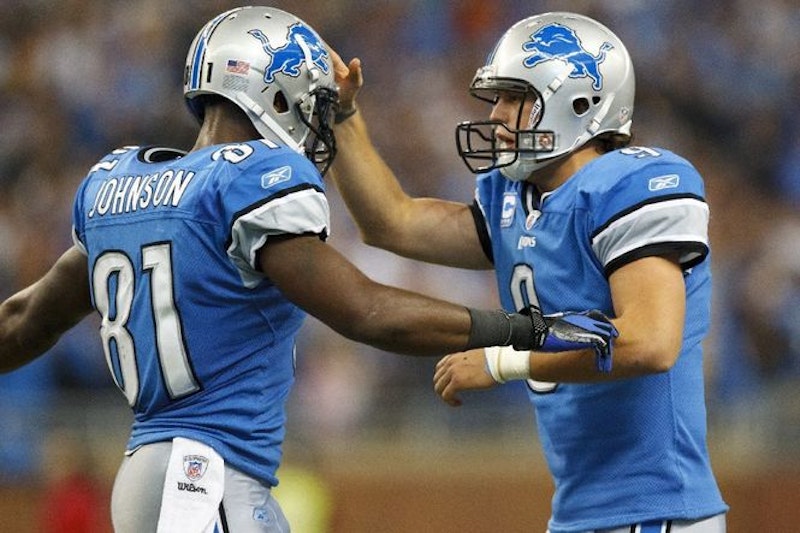 It’s crunch time for fantasy footballers across the country. If your team has weathered the myriad of injuries that has befallen many of the NFL’s stars consider yourself lucky. If not, welcome to the club. No one wants to hear about my fantasy team, or yours for that matter, so here are some general tips on how to weather the storm of a disappointing fantasy football season.

If you’re in a keeper league, then you can start looking towards next season. Wide receivers have been hit particularly hard by injuries this season with stars like Julio Jones, Randall Cobb, Roddy White, Michael Crabtree, and Percy Harvin missing considerable time. While those injuries no doubt derailed many fantasy plans this autumn they represent an opportunity to stock up for 2014. Crabtree and Harvin are practicing with their teams and could return to action in the next few weeks. If either wideout is available in your league snag them from the waiver wire. If Crabtree and Harvin have been taken, don’t fret. The NFL’s focus on fining for helmet-to-helmet contact has resulted in defenders going after the legs of ball carriers. Solid contributors like Reggie Wayne, Danario Alexander and Jeremy Maclin have all suffered season-ending ACL tears.

NFL injuries also open up opportunity for younger players to stake their claim to additional playing time. In Dallas rookie WR Terrence Williams has emerged as a downfield weapon for Tony Romo. Williams has the added benefit of playing opposite All-World WR Dez Bryant. Miles Austin will be a free agent following the season and with the emergence of Williams it’s unlikely the Cowboys will retain Austin. Williams will see even more targets next season with Austin in another uniform. Grab the rookie now if he’s available.

Jarrett Boykins is another youngster who’s emerged as a result of an injury. When Randall Cobb suffered a broken leg, the Packers turned to Boykins to fill the gap. After going undrafted out of Virginia Tech the second year WR has been a dependable playmaker for Aaron Rodgers. If you’re afraid that Boykins will head back to the bench once Cobb returns, keep in mind that Packers’ WR James Jones will be a free agent after the season. Green Bay typically promotes from within rather than paying big money to free agents. If Jones bolts from Lambeau, Boykins could be the beneficiary. Taker a flier on the young WR now and cross your fingers during free agency.

Lions’ WR Ryan Broyles was predicted by many to break out in 2013, but his season never got off the ground. He battled injuries early on, played sparingly in six games, and suffered a season-ending Achilles injury. The Matthew Stafford-Calvin Johnson duo makes any pass catcher in Detroit worth stashing on your roster. Broyles will be poised for a year three breakout in 2014 and he’s probably available in your league.

The running back position has traditionally been the most important to fill in fantasy football. The NFL’s continuous rule changes have made quarterbacks virtually untouchable and focused on emphasizing the passing game which has reduced the importance of running backs on fantasy rosters. Top fantasy picks like Ray Rice, Doug Martin, C.J. Spiller have been injured, marginalized, or both. Take the opportunity over the next few weeks to stack your roster with backup running backs in the event they emerge over the final two months of the season. Names like Ben Tate, Joique Bell, and Toby Gerhart may not scream “Fantasy Stud” but they’re all talented backs scheduled to be free agents after the season. Tate has played behind Arian Foster in Houston but he’s rumored to be the Cleveland Browns’ top target in free agency. Bell is contributing as a pass catcher for the Lions but he’s played second fiddle to Reggie Bush in the Detroit backfield. Bell could have a future as a pass-catching weapon like Darren Sproles or Danny Woodhead in the right offense. Gerhart entered the league with much fanfare after a terrific collegiate career at Stanford. Gerhart’s NFL opportunities have been few and far between playing behind Adrian Peterson. Gerhart will no doubt bolt from the Vikings as a free agent with the benefit of four years of NFL experience and very little wear and tear on his body. Gerhart could wind up with a team like the Saints or Chargers who have received little production from first round draft picks Mark Ingram and Ryan Mathews.