And what team snags David Price from the Rays? 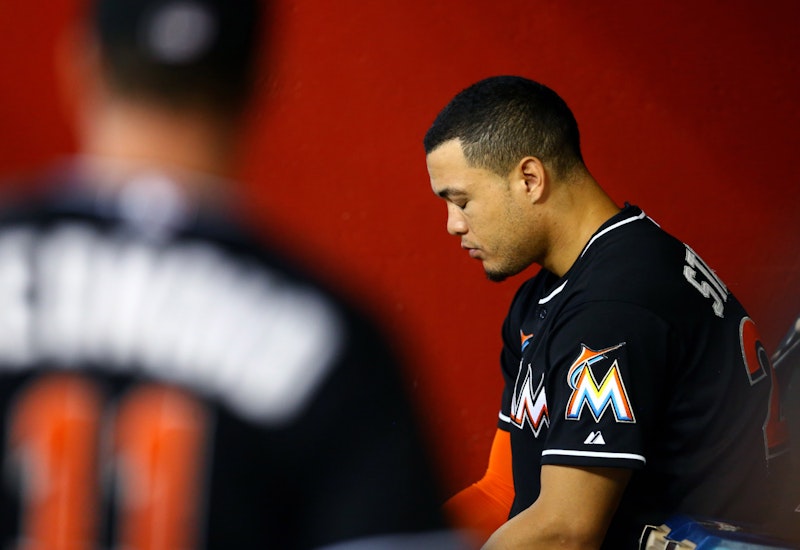 General managers have inquired about Miami Marlins star Giancarlo Stanton ever since he was first promoted to the big leagues. It makes sense. Power hitters aren’t nearly as common as they used to be; they’re at a premium right now in baseball. Stanton, just 24, is probably the most powerful hitter in baseball, despite his youth. In 2012, he hit 37 home runs in only 123 games. His .608 slugging percentage was the best among players with 500 plate appearances or more. There’s no doubt that Stanton can hit, but as a trade target, he’s one to avoid. Surrendering the farm system for one player is hardly ever a good idea (the Tigers’ acquisition of Miguel Cabrera is a notable exception), and there’s a reason I mentioned his 2012 stats, and not those from this past season. In 2013, Stanton managed to play in just 116 games, and while he was good (2.3 fWAR), he was hardly superhuman. His disappointing performance isn’t cause for alarm: the right fielder is loaded with talent.

A more legitimate cause for concern is the number of injuries that have sidelined Stanton. In his short career, Stanton has dealt with serious knee and hamstring problems, which have kept him on the DL for a long period of time over the last two seasons. Another main concern for any acquiring team is his agent. Scott Boras will not let Stanton anywhere near an extension. He’s drooling at the fact that his client is set to reach free agency at age 27. With only three years left of team control, Stanton isn’t worth the glut of premium prospects that any team would have to give up for him.

The Will Middlebrooks Dilemma: The Red Sox have a tough choice to make this offseason regarding their corner infield positions. I addressed the first base issue in a previous column, but didn’t touch on what they could do at the hot corner. At this time last year, Will Middlebrooks was the obvious incumbent, even though he showed little patience (and even less desire to try to be more patient) and struck out too often. Not surprisingly, his flaws were more evident once he was given more plate appearances. Now those same fans who wanted to call him up immediately in 2012 because he played a handful of good games in AAA are rallying for his demotion.

It’s not that simple, though. If the Sox trade or demote Middlebrooks, they’d need a replacement at third base, and there aren’t many options on the free agent market. Juan Uribe and Kevin Youkilis are the only legitimate starters available. Trading for a third baseman would be tricky, too. Why would the club put together a package for Chase Headley, for example, when prospect Garin Cecchini will be ready by the end of 2014? Cecchini won’t require the sacrifice of other prospects or a giant extension. Plus, he’s younger.

The problem with Cecchini, though, is that he can’t start the season with the team, as he hasn’t played more than 66 games above high-A Salem. So, for now, the only thing the Sox can do is wait and hope that Middlebrooks develops some patience over the winter. I imagine that Cecchini will start the year in AAA and join the big league club by July if Middlebrooks is hitting as badly as I suspect.

The Robinson Cano Situation: Let’s end the speculation now. Robinson Cano will sign with the Yankees for a ludicrous amount of money, likely over $200 million. New York GM Brian Cashman may be courting Omar Infante and asking the Reds about Brandon Phillips, but those are just poorly disguised negotiating tactics. The real question is: will he spare us the drama and sign before Christmas?

Who Will Acquire David Price?: Many teams will be competing to acquire David Price this offseason, and the general consensus is that the Rays will get a buttload of prospects, which is probably true. The Rangers may be the most aggressive team, and they’ve been connected with Price the most, but do they have enough young talent to surrender? For years now, the Texas farm system has been touted, but most of their coveted prospects have either graduated, flamed out, or been traded. Obviously, Jurickson Profar would need to be the centerpiece of the deal. Who else they’re willing to include is the important part. The Nationals have also shown serious interest in Price, but they’re in an even weaker position prospect-wise. The Diamondbacks, who are really interested in Jeff Samardzija, are another team to watch.