Baltimore’s on the verge of missing the NFL playoffs. 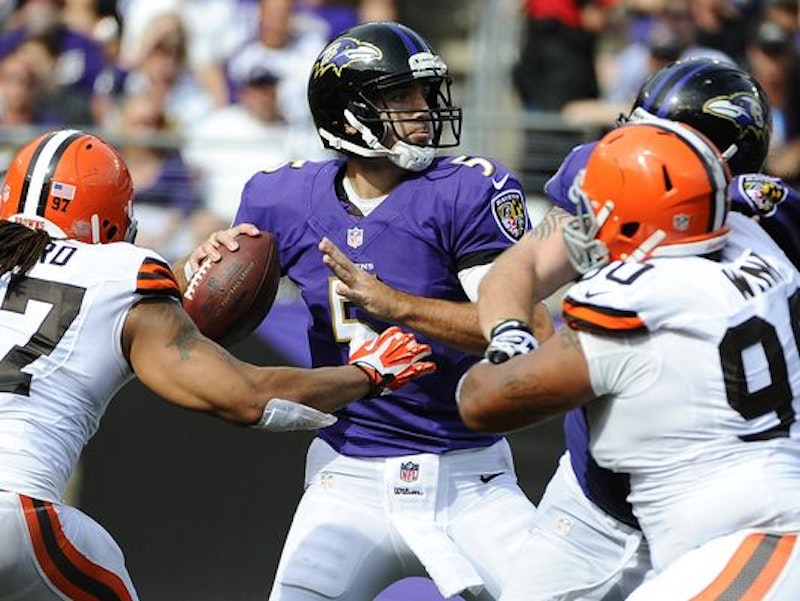 The Baltimore Ravens are 3-5 following Sunday’s loss to the Cleveland Browns. The defeat ended an 11-game winning streak against Cleveland as the Ravens dropped their third straight contest. The NFL season is past the halfway point and the World Champions appear to be sleepwalking.

On a personal level it’s hard to blame them. As a fan I’m still suffering from a bit of Super Bowl hangover and I didn’t spend the offseason making commercials and appearing on late night talk shows. The Ravens’ struggles have led many to question the judgment of coach John Harbaugh, the effectiveness of offensive line coach Juan Castillo, the long-term contract given to Joe Flacco, and the heart of just about everyone in purple and black.

It’s frustrating to watch the Ravens muddle their way through seemingly half-hearted efforts like last week’s Cleveland game or the previous week’s effort against Pittsburgh. Yet it’s easy to see that Baltimore fans have been spoiled not just by the Harbaugh/Flacco era but by the success of the franchise dating back to the 2000 season.

GM Ozzie Newsome has largely remained unscathed from fan and media criticism but an extended losing streak will no doubt have some turning on him. While the Ravens’ inability to run the football to any acceptable degree has hampered the offensive attack fans shouldn’t be so quick to scapegoat Ray Rice and the offensive line.

The fact is that Baltimore’s struggles can be directly attributed to the lack of impact plays from the franchise’s highest paid stars. Only Terrell Suggs, who tops the Ravens’ salary chart with a 2013 cap number in excess of $13 million, has come close to earning his salary. Suggs has racked up nine sacks and 60 tackles in eight games and is on pace to set career highs in each category. The man that calls himself T-Sizzle has easily been the Ravens’ most inspired performer. After Suggs the highest paid Ravens have been a huge disappointment. When Newsome and Harbaugh jettisoned the likes of Anquan Boldin, Ed Reed, Bernard Pollard and allowed Paul Kruger and Dannell Ellerbe to depart as free agents they effectively turned the leadership of the Ravens over to the likes of Haloti Ngata, Ray Rice, Marshal Yanda, Joe Flacco, and Suggs. The next wave of Ravens’ leadership has been of a trickle than a tsunami thus far.

Haloti Ngata counts $11.5 million against Baltimore’s salary cap this season. The former All Pro has been a shadow of his former self. Ngata’s cap number climbs above $14 million for next season. Barring a remarkable turnaround in the final half of the season Ngata may be an ex-Raven come March. Joining Ngata on the list of high paid flops are offensive lineman Michael Oher and Marshal Yanda. After shuffling between left tackle and right tackle for the past four seasons Oher has settled in as a turnstile on the right side. Once hounded by offsides calls Oher has struggled at both pass blocking and run blocking this season. Oher suffered a severe ankle sprain in the opening week loss to Denver and he may still be bothered by the injury. Yanda had offseason shoulder surgery and hasn’t looked right all season. The struggles of Oher and Yanda (who count a combined $12.4 million against the cap), coupled with the play of second year center Gino Gradkowski and the back injury to Kelechi Osemele have left the Ravens with a tattered offensive line.

As bad as the offensive line has performed, Ray Rice has been worse. Once Baltimore’s most indispensable weapon Rice has played like a practice squad player for much of the season. He’s lacked his normal burst and hasn’t made many tacklers miss this season. Despite earning $5.75 million this season Rice is averaging an embarrassing 2.7 yards per carry. At just 26, Rice looks closer to the end of his career than the beginning.

Flacco ranks low on the Ravens’ list of problems but the quarterback shouldn’t be totally off the hook. After last winter’s historic postseason run and an offseason of commercial shoots and public appearances Flacco has looked pedestrian this season. Flacco’s five interception performance against the Buffalo Bills cost the Ravens a winnable game against an opponent perceived to be inferior. In the QB’s defense he’s played behind a patchwork offensive line, with an inexperienced receiving corps, and received no support from the rushing attack. The time has come for the Ravens to put the ball in Flacco’s hands, spread out opposing defenses, and start slinging the rock around the yard.

The Ravens’ playoff hopes could suffer a fatal blow on Sunday when the first place Bengals march into Baltimore. A loss on Sunday would effectively snuff out Baltimore’s chances at making a sixth straight postseason appearance. The time has arrived for Baltimore’s highest paid players to make their presence felt on the gridiron.